A couple weeks ago, Beam announced the release of a new Booker’s Bourbon Roundtable release. This created some discussion in another forum about which releases were and were not roundtable selections. This was actually a question I’ve had over the years so I reached out to Beam to get an answer. If you’re not familiar with “roundtable” selections, it’s a Booker’s release that was selected by a panel of whiskey writers and the Master Distiller, Fred Noe. Check out Chuck Cowdery’s post about the selection process. 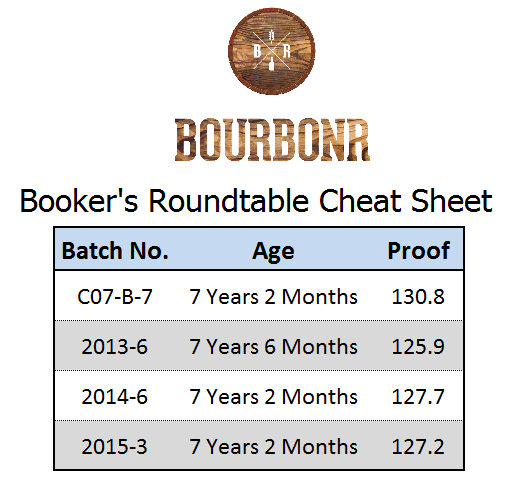 I’ve yet to try the 2015-3 but the 2013-6 is my personal favorite. I’ve managed to bunker one bottle of the 2013-6 but if you see a roundtable release on the shelf you’ll want to grab it. What’s your favorite Booker’s release?

Batch: C03-1-17 Age: 7yrs. 4mo.Proof:128
Year: Either 2010 or 2011
Very light yellow honey color. Scent of damp limestone, burley tobacco, fresh plowed topsoil and cut field grass. Complex tastes of honeysuckle, juicyfruit gum, concord grape and sweet clover all balanced by that signature Booker cracked peppercorn bite. Nice mild euphoric buzz. If there was ever a bourbon that captured the essence of Kentucky, this is one. Super stuff and listed in my top ten all-time bourbon list.

Aren’t Big Man Small Batch 15-01 and Dot’s Batch 15-02 also Roundtables? Per Chuck in your link above, “These Roundtable batches have apparently been well-received because Beam-Suntory has just announced that 2015 will see a series of specially-labeled batches. The first, Booker’s Bourbon Batch 2015-1, named “Big Man, Small Batch,” features a custom label inspired by the iconic image of Booker sipping bourbon in his rocking chair with his dog Dot by his side.”

You have to love reading reviews sometimes. Cut grass, grape, and juicy fruit…said no one ever. Can’t bourbon just be bourbon without some know it all trying to sound super snobbish?

“.. .snobbish” Who’s being a snob? Appears that you are the snob for trying to dictate what I should or should not think. Sorry to offend you with my tasting notes pal. Next time I decide to post a comment here, I will be sure to check with you first so that you can tell me what I can or cannot publish. Jeez,I bet you are a premium member who now thinks that you can throw your weight around because you”ve convinced yourself that you have some sort of clout with this blog? Lol!!

If it just all tastes like Bourbon to you then congratulations, you are one cheap date. The Bellows and Old Crow are down on the bottom shelf, my good man.

I spoke with Fred 2 days ago, and he said they just finished the roundtable selection for 2015-4. He also implied the previous 2015 releases were created the same way.

Are there any other designations on the label that sets these apart? or do we just have to look for the code?
Thanks

Usually the round tables are better batches than the regular ones. I would love to see reviews of the new center cut and comparing it to another batch.

This shows which 2015 are Round table picks

Stopped by 2 liquor stores in PA today. Found three 2015-3 and three 2015-4. Per bookers website, it appears that they are both round table selections. Any thoughts on this? I went with the 2015-3 per you post. Have you tried both? Any preference? Also, should these be this easy to find?

I can’t compare the 2015-3 to the 2015-4…but, the 2015-4 “Oven-buster” release is amazing and very different than past years releases of Booker’s. I don’t disagree with the description on their site, but I would add that a very rich nutty taste prevales…much more than oaky vanilla. Either way, the finish is extremely balanced and easy to drink. Highly recommend! Please let me know what you think of the “Center cut.”

Update. I went out and picked up the 2015-3 roundtable…it’s not even close to as good as the 2015-4. The -3 is smooth but lacks complexity. The rye is very prevalent…it reminds me of Stagg Jr. a bit. Not a bad Bourbon by any means BUT the -4 is an exceptional release.

I was able to bunker a couple of bottles of CO7-B-7 and it’s really great stuff!! Grab it if you can.

Just came across 4 bottles of the 2013-6 here in Denver. Grabbed two, but at $85 piece. Was surprised to see it this high, but had not seen any of late. Left 2 on the shelf. Looking forward to trying one and hanging onto the other.

The proof of Roundtable Batch 2013-6 is wrong in the chart. It should be 126.5 as stated in the press release: