It seems like there is a new “craft” bourbon or whiskey on the shelf every time I walk in to a liquor store. Unfortunately, most of these “craft” distilleries are nothing more than Non-Distiller Producers or young whiskey that taste terrible. After my first sip of Breckenridge Bourbon I realized this was something interesting.

The first thing I noticed is the bottle states that the bourbon was made at 9,600 feet with snow melt from the Rocky mountains. Initially, Brecekenridge distillery sourced their whiskey as they waited for their own whiskey to mature. While there has been no official announcement it is believed that Breckenridge started bottling their own bourbon some time midway through 2013. Either way, they’ve done a great job if this truly is a 2-3 year bourbon. I’d go as far to say that this is one of the best bourbon offerings I’ve had from a craft distiller. Finish: A little light and peppery but that is to be expected with a young bourbon like this.

Overall:  I have to admit I was a little jaded by the price tag of this bourbon. I think this was another “craft” distiller peddling over-priced whiskey. I was definitely wrong. This is a

Bonus review from Nicholas at The Whiskey Isle:

Verdict on the Breckenridge Bourbon: 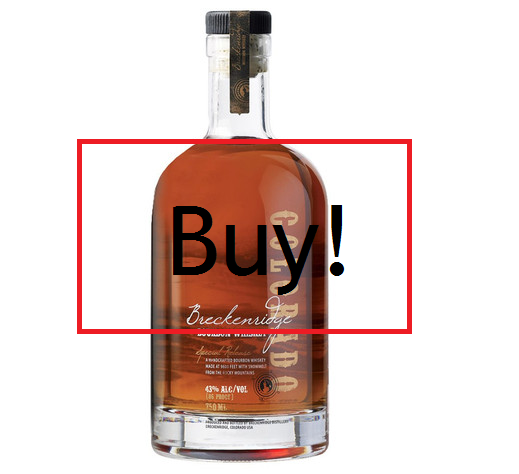 I agree 100%. I just started working with a company based in Boulder, CO. First suggestion I got from local bartender was to try Breckenridge. I was pleasantly surprised and it’s become a bottle I keep stocked now.
I’m really hoping that they are doing some special things with their bourbon for special bottles in the coming years. I’ll be keeping my eyes open for those.

Yes, I’m just hoping they won’t be a CO only release!

I found the Breckinridge offering to be a lesser offering – what you described as a young, over-priced craft distiller producing over-priced whisky. Of course it has some redeeming features and I balance them against the young age. That, and I bought it on sale at $35 – otherwise I’d be really hacked off. Like our Wyoming whisky, I want to wait for the aged product and will let others buy the ‘green’ product. Green, as in a distiller scrambling too get some income while the real stuff matures.