Skip to content
Blakein
Posts
·
Reviews
August 26, 2013February 26, 2015
Todays review comes from Clay Risen. Clay is a Staff Editor for The New York Times and also writes about whiskey, bourbon and rye on his blog Mash Notes. Also, he has a book coming out this November titled American Whiskey, Bourbon & Rye: A Guide to the Nation’s Favorite Spirit. It is available for pre-sale now (I have already pre-ordered my copy) 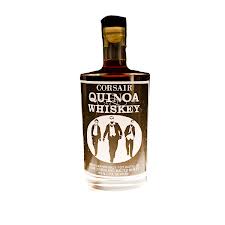 According to the U.S. Tax and Trade Bureau, whiskey is, among other things, a spirit “distilled from a fermented mash of grain.” That’s a broad palette; the world abounds in different types of grains. Still, we’ve grown used to making whiskey with just four of them: corn, barley, wheat and rye.

That’s not random, of course — they are easy to work with and produce tasty beverages. Many others do not. But a few enterprising distillers are starting to break beyond the Big Four: Dry Fly, out of Spokane, Wash., has a triticale whiskey. Koval, from Chicago, has made whiskeys with millet and spelt.

It’s no surprise that Corsair, from Nashville, Tenn., is among these pioneers; outré distilling is their stock and trade. One of their flagship products is Triple Smoke, a malt whiskey made with three fractions of barley smoked over cherry wood, peat, and beechwood. They’ve made a whiskey distilled from a Russian imperial stout beer – called, naturally, Rasputin. One of their most recent releases is a whiskey made with barley and red and white quinoa, the grain of choice for health-conscious foodies, but not exactly an obvious pick for a whiskey.

It’s a fascinating drink, even if it didn’t really work for me. There was too much of a chemical overtone on the nose, and too little flavor on the palate. I don’t blame that on Corsair, but the grain – indeed, one of the virtues of Corsair is that they produce consistently high-quality liquor, so their experimental releases make perfect test cases. You will probably never taste a better quinoa whiskey, so if you don’t like this one, you just need to accept that you don’t like quinoa whiskey.

And although the overwhelming chemical notes, redolent of paint thinner, turned me off, there was a lot else going on in the nose. The first impression is, interestingly, of buttered popcorn – not real buttered popcorn so much as the artificial scent found in scratch-and-sniff pages. Over time, caramel, walnuts, and some bright fruit notes came through as well. I did like the way the nose continued to develop in the glass, toggling between the chemical and the agricultural (for lack of a better antithesis).

Likewise, while the palate was a little underwhelming, it wasn’t completely vacant. It has a very smooth, grainy flavor, sort of like a wheat whiskey. There’s an undefined floral quality in there, too. The middle and end reveal an intensifying spiciness of both black pepper and rye. The tasting notes said there was chocolate, which I missed, and caramel, which I found after a few sips. At the end there’s a long, lingering aftertaste of molasses.

Unlike a lot of experimental whiskeys, I could see this one attracting a broad fan base. The chemical notes aside, it’s an approachable, smooth drink, light but with a strong enough backbone to work in a summer cocktail. It didn’t take me too long to realize that quinoa whiskeys don’t do it for me – but if they all taste like Corsair’s, I wouldn’t be surprised if a lot of people feel differently.

I received two bottles of the Corsair quinoa as gifts and after drinking one I can say I really don’t like it. I haven’t found too many whiskies that I don’t like but this is one of them. The taste is too weird in an off putting way in my opinion.

Er, has anyone told the guys at Corsair that quinoa is not a true grain and thus can not be an ingredient in whiskey?

I drink quite a bit of bourbon and ryes and that bottle remains 7/8 full after a year. You’re too nice with the review.

Does anyone know where you can buy this? Is it in the carrefour? thanks looks genius