I’ve already stated my opinion on this blog about how I feel about whiskey competitions. However, a new wrinkle in the whiskey competition debate came up when Smooth Ambler took the award for “Best Single Barrel” back to West Virginia. Chuck Cowdery noted on his blog that even though MGP produced and aged the winning bourbon they didn’t receive any awards (Metze Select). The discussion evolved from there.

Cowdery is a Bourbon Hall of Fame inductee, and I get his point however I would argue that the best tasting bourbon won. That should be the only thing that matters. It was a blind competition. The winner just happened to be from an NDP. If we start adding different stipulations, we’re just muddying the waters even further. Do we want more whiskey competition categories? One for NDP’s, One for distillers. What if they don’t distill it, but they barrel and age it? What about Smooth Ambler Contradiction which is a blend of Smooth Ambler distillate and MGP bourbon? 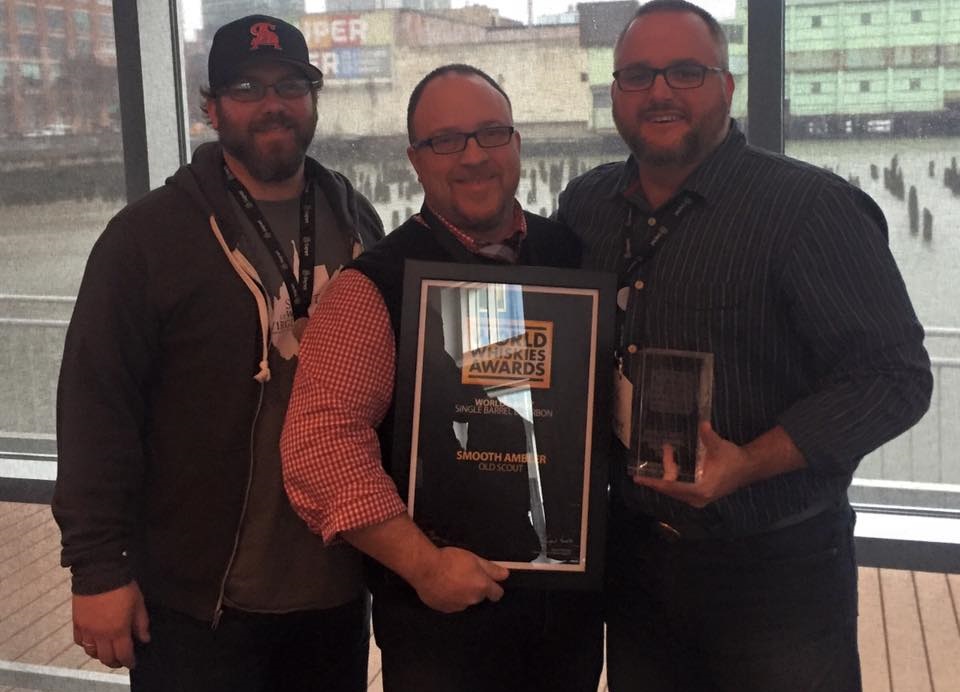 Maybe I’m biased because I like the Smooth Ambler guys and completely agree with their win. Old Scout 10 has shown up on numerous of my “favorite bourbon” lists. While they do source, they seem to be better at it than most brands. The conversation continued on Twitter with Mark Gillespie from WhiskyCast getting in on the comments.

Unless you distill a whisky yourself, you have no business entering it in competitions…unless there’s a sourced whisky category!

It comes down to the question “should NDP’s be in their own category?” We’d be better served to consider the benefits of NDP’s in their category. Sure, some new guys that aren’t aware of all the NDP’s would be more informed, but I assume anyone reading this post already know who produces and who doesn’t (read this if you’re not sure). This will never happen, though. In no way does this help the whiskey competitions. Remember, the brands/distilleries pay to be in these competitions. That makes them the customer. Why would a competition make a decision the could upset their customers. Not saying that’s right, but it is the truth. Just one more reason it’s time for the GREAT BOURBONR SHOWDOWN COMPETITION!

Debates over NDP’s aren’t going away. They’re debates that need to be had. It’s up to the consumer to make good bourbon choices and not just grab the first bottle on the shelf with a “gold medal” sticker on it. I pose the question to Bourbonr’s, should NDP’s be separated into their own category?

First off, I really enjoy your blog. Thanks so much for your dedication to the craft!

I could not agree more with you comments, the “copied and pasted” comments below are my response to Chuck (whom I have deep respect for, I just disagree with him on this point…):

First off, love your blog, your books, and your approach!

I’m going to play devil’s advocate here for a bit. I am willing to bet that MGP feels not the least bit slighted for not being “thanked” for selling Smooth Ambler the whiskey they chose to bottle. In fact, I would be willing to bet that they would shy away from it.

Why? It seems counter to their business model. If MGP were looking for awards, accolades, etc. from the whiskey press I would argue that they should be bottling it themselves. Instead, it seems to me that they are in the business of providing their clients the opportunity to purchase very high quality whiskey, bottle it, and reap the rewards. In other words, they are in the business of making others look good without the need to step in the limelight. I am in a similar business myself.

It comes at a premium too – the aging time and economy of scale issues aside – in order to remain viable, they have to be charging the NDP’s more than it would cost for those NDP’s to distill, barrel, and age the same whiskeys themselves. It’s actually a brilliant business model and MGP do make some beautiful whiskeys.

At the end of the day, though, Smooth Ambler chose this wonderful bourbon, paid MGP for it, and bottled it; I believe they deserve sole credit for doing so. I bet MGP expects no more to be acknowledged than my local liquor store expects me to acknowledge them when sharing a bottle of Old Scout with friends.

I completely agree about “muddying the waters” by adding too many categories. Ultimately, the best tasting product should win “best bourbon.” Smooth Ambler brought an incredible bourbon to market and should be recognized. Could MGP have put this out? Sure. But they didn’t. There’s something to be said for a company that can source the good stuff and blend well.

In a market filled with hype and overpriced juice (secondary market), it’s nice to see a company with a quality product get recognized. I am incredibly surprised by how tasty the 10 year expression is. I prefer it over many of the “in vogue” bottles in my collection.

Blake – as always, love the blog, respect the opinions. I’m not going to weigh in on NDP’s vs distillers vs whatever may come next. The email that came in to notify of this post started with check out the new site. So, I did, and I think it looks really slick and professional. Well done, keep up the good work, and, well, if it tastes good to you, then I say drink it 😉

I’m with Cole – the gifts of nose/taste/mouthfeel/etc are rare talents indeed and these WV boys obviously have a knack for determining what some bourbon drinkers may like. MGP may just be the guys that says, “Hey, we’ll produce a broad assortment of profiles and let the experts determine what goes in the bottles that best suits their customers…”

I am so over chasing down the elusive bottles of the rare stuff and am constantly on the lookout for the brown water that I love to drink and is readily available. I have several of the Smooth Ambler bottles in my cabinet for this very reason and I tip my hat to them. This is one bourbon fan that really doesn’t care who mixed the grains or who put it in the bottle – if I like it, I’ll buy it, and say thank you very much!

Although a novice to the blind tasting process, but a long-time bourbon lover, I feel rather vindicated and validated that Smooth Ambler won. Last year I held an a inaugural blind tasting with five bourbon-minded buddies and we too picked Smooth Ambler 10-yr as our best-of-four. I was pleasantly surprised, as I was somewhat skeptical of using an NDP in the mix.

We are residents of the famed Whiskey Rebellion locale, and affirmed Maker’s and BT regulars, despite, or as a result of, the archaic PA-controlled spirit market. For the first tasting, I decided to go outside of KY, since that is the origin of our go-to bourbons We judged Smooth Amble top with an avg. score of 90 points; Haas Bros. Cyrus Noble at 89 (KY made-San Fran. bottled); It’s 5 O’clock Somewhere Reserve (Washington State) at 85; and Isaiah Morgan Small Batch (WV product) at 76. The higher proof Ambler (99) was sampled last due to the octane 9 points higher than the others.

While I understand there is no accounting for individual tastes versus cost, it is interesting that the $90 bottle of Isaiah Morgan finished dead last, while the $32-35-a-bottle rest of the field shone in comparison. This might further confirm the futility in chasing Pappy’s and other holy grails of bourbon on the secondary market (as espoused by Blake and many BourbonRs) and commend to just drinking what you like.

I care little for marketing, and feel like a Bourbon or any whisky for that matter should be judged by the flavor. If a product is priced appropriately to its perceived value, then honestly I don’t care where it came from. Some industry professionals get to caught up in what a company puts into marketing, and the quality of of the juice is sometimes seen as just an after thought. It’s hard to take someone seriously when they write with such biased conviction as to why what a company markets the bottle to be has anything to do with the quality of the spirit. Would I like to know every specific detail of the process? Of course I would. Just because that info is not readily available doesn’t stop me from buying a product to evaluate it for taste, and less for packaging. Smooth Ambler is very forthcoming in letting the public know what they produce, what they source and even the mashbill for most of its products. The same can’t be said for mega star Buffalo Trace. Their recipes are purely speculative. What’s the right answer? Transparency. Will it ever be crystal clear? That’s doubtful, but we can only hope going forward that companies will become more upfront on thier products, and continue to strive for a better overall quality for the sake of the community. Repeat buying has to be the goal. Rushing a product to market just to try and cash in on the boom is not a business model for longevity. How many of these small craft distilleries will still be around in the next 20 years? I guess only time will tell.

Once you start having different categories for NDPs and distillers, you run into lots of problems. You have some people who contracted for distillate to their own recipe, who aged, blend, and bottle themselves. You also have someone like CVI, who just owns the label and does none of the production work. Of the goal is to find the best whiskey, then everyone should be in one pot.

The folks at Smooth Ambler are very forthcoming about the fact that Old Scout is a sourced whiskey, unlike some other brands that concoct elaborate backstories that make it sound like the juice in the bottle is a closely guarded recipe that goes back generations in their family, when really, it is nothing of the sort. They are carefully crafting their own bourbon, and I can’t wait until it’s out. They’ve pushed back its release because it’s not ready, which is fine with me. I’m glad they’re willing to take the time to put out the quality product that will set the new tone for their brand.

As for whether or not there should be other categories for NDP’s at whiskey competitions, I don’t agree with that. Why would there be? At classic auto shows, do people worry about the fact that the car’s owner gets the award and not the original manufacturer? “You didn’t build this car!! Ford did!!” If Smooth Ambler’s contribution to Old Scout’s taste profile is so small that they don’t deserve the award, then why did their bourbon win it over all the other bourbons that use MGP as their source (and there are quite a few)?