This appears to be a new line from Wild Turkey called “Master’s Keep” and not a re-release of the 17 year old bourbon they released in early 2000’s. There’s not much better than ultra-aged Turkey! Hoping the price isn’t too crazy but based on the Wild Turkey Diamond release I’d expect somewhere in the $150 range.  I’m still working on collecting more information about this release but see the labels below.

Typically, I can get a feel for what the bottle will look like after seeing the label. This one kind of has me stumped. I’d expect something similar to Diamond or Tradition 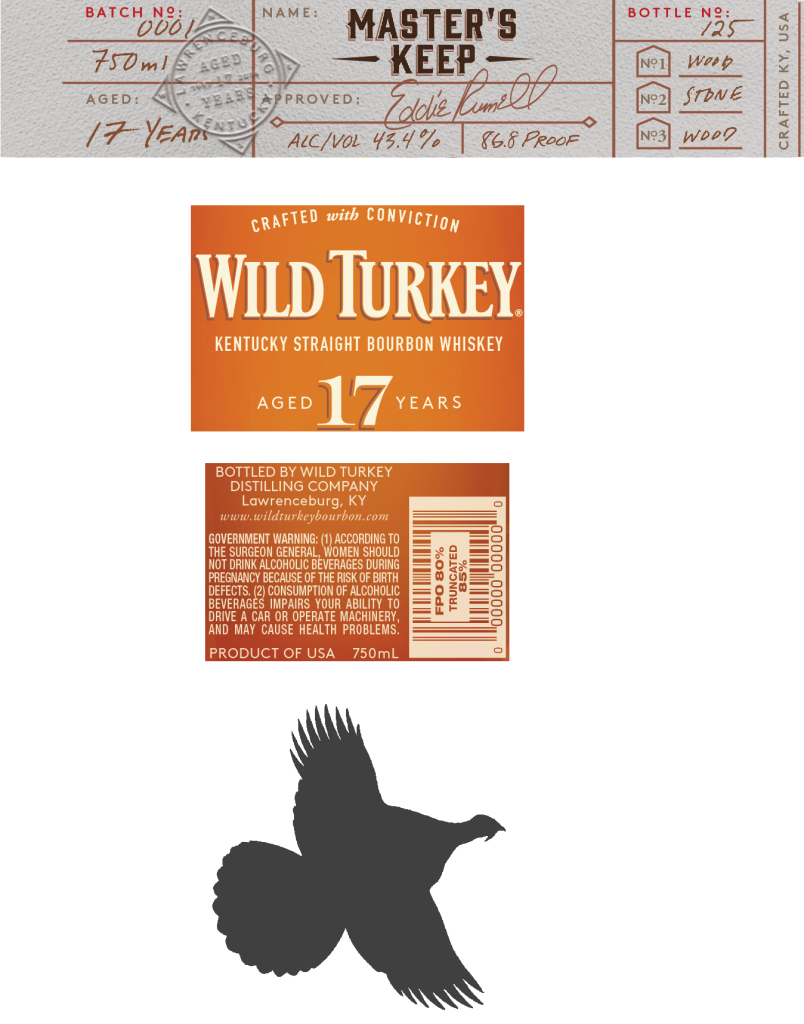 I got really excited until I saw the proof.

not ideal but still, i dont think it would be too light at 43.
there’s definitely great bourbons even at 40’s

I know guys were turned off to the Diamond because of the low proof, but I thought it was lovely at 92 proof and think some of the complexities of this would have been lost at 101. I am certainly not one to second guess a guy who has been in the business for so long as Jimmy Russell on proof. Perhaps he was pressured by his Italian bosses to get more bottles out of the 17 year old bourbon they had laying around? Why wouldn’t they? Its exactly what most customers are doing when they release it at 101….hoarding it, and flipping it for double or more. I’d rather see the distilleries get the money and have the stuff sit on the shelf a bit longer, than have the opportunists buy it in bulk just to sit on it. We’ve created our own monster here, and have no one to blame but ourselves.

From what I can tell it is only available in Japan. Are you hearing they are going to release this in the US?

Sorry to all you “got to be high proof” people. Many of the professionals water their whiskey down below 50% anyway, and your liver hates that high proof stuff if you don’t add water to it. But, hey, it’s your liver, do what you want. It’s not about the proof, it’s about the aroma, the taste, the mouth feel, the finish and the overall experience; all of which can be significantly diminished by over proof bourbon. It takes an amazing master to make a cask strength bourbon that doesn’t need to have water added to make it truly appreciated. So personally I prefer the master make it drinkable and smooth right at the distillery. I’ve bought so many cask strength bourbons that are just total alcohol forward and need significant water to be drinkable. And I’m talking George T Stagg and such, not some unknowns. I prefer the ones like Pappy, Maker’s Mark, Forged Oak, Jefferson’s Reserve, Angels Envy and such that come totally drinkable right from the bottle with no need to add water. I’m not saying I don’t like the George T , I do, but only after I add a lot of water. (For 30ml of Stagg, I add 11.5ml branch water and it is still hot.) What I’m saying is I’d rather they add the water at the distillery. That is apparently not a popular opinion. But that’s me.

You’re liver probably hates both, ha! I do agree with you that people have gotten a little too obsessed with proof over taste. I’ve had some great 80 proof bourbon and some bad 120+ bourbon. In the end it should be about the taste.

I think what most (myself included) are worried about is a reduced proof is for increased profit and not about taste. It’s a balancing act for brands. Dilute and make for $$$ but they could also lose customers which means less $$$.

It is actually barrel proof. This bourbon decreased in proof as it aged. Hmm