What will kill the bourbon boom?

There’s no doubt bourbon is in the middle of a boom. Some may even call it a bubble. Demand is at an all-time high. Every major publication, including the cover of Fortune, has covered the bourbon industry and not just the Pappy Van Winkle craze. Distilleries are screaming shortage while the consumer still wants more. In the past five years whiskey sales have increased by 40% in the United States and exports have nearly tripled within the last 10 years. Growth numbers like the Bourbon industry has seen in recent years are usually reserved for the technology sector or other more agile sectors. Not an industry that has remained virtually unchanged since prohibition. Shoot, the whiskey industry had been in a steady decline for the last 30 years prior to 2002. 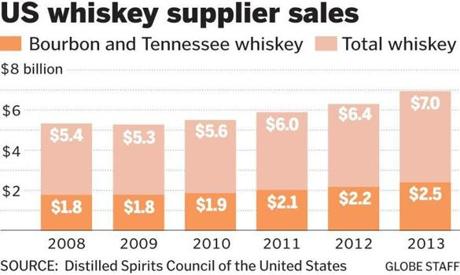 While the bourbon and whiskey industry finds itself in a great position the question must be asked “is this growth sustainable?” The industry must also ask “what factors could negatively affect the growth?”

The cigar industry saw a similar scenario in the mid-90’s there was a boom in high-end premium cigar market followed by a bust once manufactures caught up with demand. Luckily, the industry continued to see more sustainable growth however it wasn’t until almost a decade later that the cigar industry returned to “boom” level sales numbers. What separates bourbon and whiskey from the cigar industry is the amount of time it takes for supply to catch up to demand. Will the bourbon supply ever catch up to demand or will the demand quickly fade while the supply catches up. The supply/demand question is the million or billion dollar question the bourbon and whiskey industry now faces.

Initially, one of bourbons greatest selling points was the fact that you could walk in to a store and grab a $25 bottle that would rival most scotches that were double the price. Slowly, the price points will become more comparable however; bourbon will always have a slight advantage since it skips import cost.

From a consumer standpoint, what will kill the bourbon boom? Shortages are already a problem and age statements have been dropping like flies but bottles with a price tag north of $90 are what will drive down demand. Think about the amount of “premium” bourbons or whiskey’s in the past year (Jefferson’s 21, 25, 30 bourbon and rye, Booker’s 25th, Baterhouse, Old Blowhard and now Rhetoric. Not to mention the insane price tag Pappy now carries). Bourbon has seen its greatest growth in the “premium” category but some of the “premium” bourbons have released to less than stellar reviews.

In an attempt to keep the momentum going distilleries and producers are trying to make their supplies last. Jefferson’s bourbon outraged Bourbonr’s across the country after founder Trey Zoeller admitted that Jefferson’s Presidential Select 18 year was blended with bourbon that contained rye in the later batches of their highly sought after bourbon. This was a problem because JPS 18 was supposedly from the famed Stitzel-Weller distillery which is known for its wheated bourbon mash bill.

The bourbon industry needs to prevent overextending itself. Sometimes the quick dollar is not always the best dollar. When asked about the possibility of being of a “bourbon bubble,” for his article in Fortune Magazine Clay Risen said: “Whereas the previous whiskey boom was mostly domestic, the global nature of the current expansion makes it unlikely that a correction will affect every market at the same time. If a bust comes, it will hit the craft sector hardest.” This is exactly what happened in the Cigar boom of the 90’s. As demand died down it was the little guys that feel it the most. Think about how many bottles are sold because a customer goes to the store looking for Pappy Van Winkle or a bottle from the Buffalo Trace Antique collection. I’m still drinking bottles I bought this fall while on bourbon hunts.

So, what will kill the bourbon boom? I believe it will be increased prices matched with a decrease in quality. There will always be someone that steps in and takes advantage of a popular industry. Since the bourbon industry relies on age for its product there we will see more and more products coming to market that aren’t ready. What’s interesting is most of the distilleries have taken advantage of the “premium” market however the majority of high priced bourbon have been released by Non Distiller Producers (NDP’s). Increased prices make it possible to survive and thrive since NDP’s work with reduced margins compared to the distilleries. NDP’s aren’t the only ones riding the brown water wave. There’s a new distillery popping up around the US almost daily. New distilleries aren’t a bad thing. I love some of the innovation craft distilleries bring. However, start-up costs bring higher bottle prices. Craft distilleries are forced to sell their product for a much higher price than the major distilleries and even the NDP’s are able to sell for just to generate a small profit. The problem is the consumer begins to confuse price with quality. A $75 bottle from a craft distillery just can’t match the quality you get from a major distillery.

My hope is that the major distilleries (Buffalo Trace, Four Roses, Heaven Hill, Wild Turkey, etc.) will continue to produce a quality product, both premium and bottom shelf. Special release and Limited Edition bourbons are here to stay. They’re not a bad thing as long as the quality is there. I would gladly pay an additional $50-$100 for a bottle of Four Roses Limited Edition or George T. Stagg if that meant I didn’t have to call 50 stores or wait in long lines.

A factor that can’t be underestimated is the dramatic identity change bourbon has undergone. It’s no longer thought of as an old man’s liquor. Younger people across the country are drinking bourbon. There’s also trend in new bourbon and whiskey bars popping up across the country. Forget about pricing, supply, demand and everything else I have mentioned in this article. If bourbon can remain “cool” we will not see this boom die anytime soon.

Finally, bourbons greatest advantage which I hope will never go away is bourbon taste good. While it can be difficult to find at times there is still plenty of unbelievably tasting bourbon on store shelves across the country at a reasonable price. It is my hope that this will never change.

Very thorough and informative post. It will be interesting to see the outcome in near future. Thanks Blake.

Hi Blake, I’m most impressed with your in-depth love and appreciation of bourbon and the unscrupulous business of profiting from it to your excellent skill of writing with detective’s insight. In your last piece of What will Kill The Bourbon Boom, what stuck me hardest and irked me was that Trey Zoeller had cut his dwindling JPS 18 barrel stocks with other booze as if he were a seamy coke dealer augmenting his inventory to match customer demand with no consideration to the integrity of the product. Low or zero morality is evident here and hopefully not on the grand scale of all the bourbon industry as a whole. We’ve all heard the stories of the bogus blends and the rebottling of in-demand collectible wines and criminality associated with this underhanded trade. What is most appalling is the JPS 18 was done at the source. The illusion of trust whether genuine or false has really been shattered, at least in my eyes, by Trey Zoeller. Blake, How do I identify the later bottles containing this stepped on diluted imposter? Thanks again for your hard work and educational efforts. Quin

Thank you for the kind words and I must say your comment was probably the most well written comment to ever appear on this blog.

Now to business. Here’s the biggest problem with the JPS controversy. No one knows (or will divulge) when the blending of batches began. Some say as low as 13 some say as high as 25. Jefferson’s will neither confirm nor deny. I truly believe that was information that they didn’t want to get out but Trey accidentally let slip in an interview. Red White and Bourbon did a good job of explaining this issue http://redwhiteandbourbon.com/2013/03/24/review-jeffersons-presidential-select-18-year-stitzel-weller/

I purchased and still have a bottle of the JPS 18 I purchased a while back and its batch 10. I guess I am 100 percent SW? But, you never know? However after learning of this mixing in later batches and in my opinion unsavory business practices, of Zoeller, or I feel it is unsavory anyway, I have not and will not buy any more of his products. I truly liked the regular Jefferson’s but there are bourbons in that price range that are just as good or better and I certainly will not buy anymore of these oddball things he is trying to sell.

Some of the points of this article are very important.
Craft is not necessary (or likely better) then the bourbon coming out of the major distilleries.
NDP are a force in the high end market – but they should be more truthful about the origins of their product.
Consumers need to trend toward bourbons that include clarity of origin, age statements and truth in the history of the recipe used.
Finally the gap in taste from good to great bourbons, is not as great as the gap in price of these bourbons. So you are not getting your money’s worth.