Time for another fall release review. Should you spend your time and money on a bottle of Angel’s Envy Cask Strength (AECS)? It’s time to find out. 2015 AECS is 127.9 proof and is aged up to 7 years. There’s no mention of how long they bourbon is in the port barrels. There are 7,500 bottles in the 2015 release and it’s expected to be priced at $170. 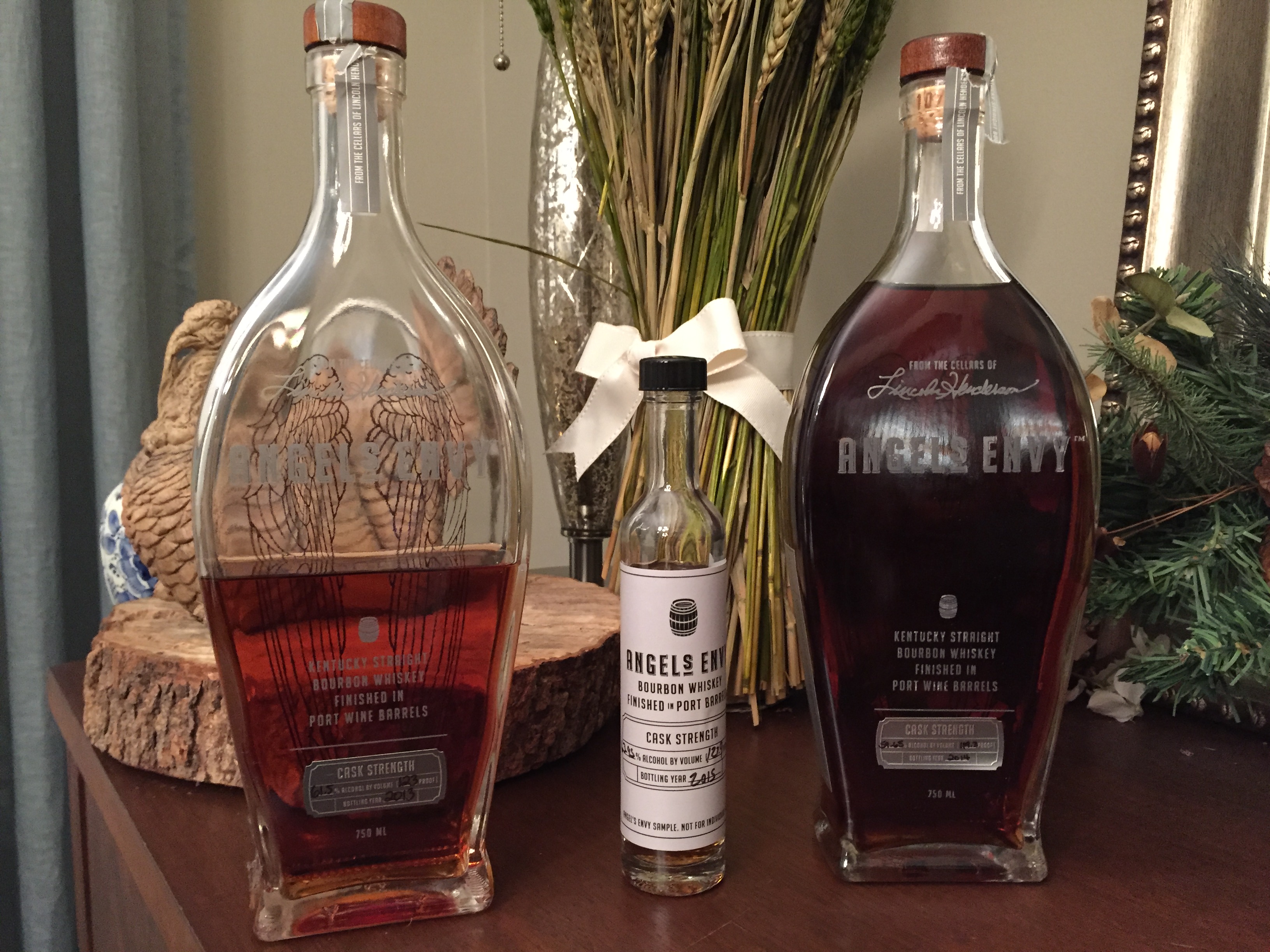 1 – The nose is raspberry sweet tea and somewhat corny. Fruity/herbal, fruity/herbal. It tastes like strawberry jam.

2 – Much more subtle fruitiness and a lot more dark brown sugar maybe even caramel. The taste brings out the butterscotch with some spearmint, but there’s also a weird lingering mineral taste. It shows up a little on the nose but much more on the palate. It throws off most of the taste

3 – Caramel. More of a bourbon nose. The taste is sweet with blackberries and black pepper. It has a great finish. Packs a punch at cask strength but there’s a richness similar to a blackberry maple syrup.

For some reason, I’ve always had trouble reviewing the Angels Envy Cask Strength. There’s always a few flavor notes I just can’t put my finger on. These seemed to post a similar challenge. Ranking them from best to worst I’d say 3,1,2.

What’s funny is after the tasting I went and looked at Angel’s Envy official review and noticed they also noted blackberries and black pepper with the 2015. This seemed funny when I was typing my review because I rarely get these notes, but apparently I’m not the only one.

There’s no doubt that 2015 is a huge improvement from the 2014 release. There was just something off about 2014. Maybe it was just too much port? 2015 AECS has me excited again about what Angel’s Envy is doing. I was worried after the Bacardi acquisition quality would start to take a turn for massive production. That doesn’t appear to be the case.

The real question is……is it worth the $200 and up mark up the greedy retailers are going to impose on AECS?

when will it hit the shelves?

Already on shelves in some states

I picked up a bottle of the 2014 last year on release. Later that same night, I ended up at a bar that had it. So, I had a pour as a sort of preview. As you mentioned, there was something that was a bit “off” about it. It certainly wasn’t great and it was giving me second thoughts about my purchase. In retrospect, I should have picked up a second bottle of Willett XCF instead. So, the box/bottle has been sitting unopened on my shelf ever since. Every month or so, I consider opening it up and giving it another try. After reading this, my initial impressions have been confirmed. As an aside, I’ve heard a couple people say that they prefer this year’s AE Rye over last year’s too. I wonder what changed. Thanks for the straightforward review!

This year’s rye is definitely better IMO I’m waiting on my NJ connection to bring my 2015 Cask Strength to me to taste but all the reviews have me excited about it. Glad I wasn’t only one who thought 2014 releases were “off”. Not bad just different. Angels has been my fav bourbon since first tasting of it

What area of nj are u located?

Thanks for the thoughtful review. This year’s release is definitely different than the 2014. We went with barrels that were a little less fruit forward (from the port finish), and allowed the bourbon to come through more prominently. I truly believe this is the best one we have done to date. Great job, with excellent observations. WH

I would love to get a bottle of AECS. When will it be released in Pennsylvania?

Just hit the shelves at specs in houston at $170. Purchased one and pretty excited to open it soon

I have the option to pick up some of this for retail plus tax, which gets to about $220. Worth it? Worth buying multiples?

This best I’ve ever had
I spent 220 for this bottle a bit pricy for me. Angles is my favorite whisky

I just purchased a bottle of the cask strength and was told that they didn’t make the cask strength version in 2 years. I paid $220 for it, along with the box it came it. How do I find out more information about how often they are made, what’s a good price, etc?