In Bourbon Curious: A Simple Tasting Guide for the Savvy Drinker, award-winning whiskey writer and Wall Street Journal-best-selling author Fred Minnick debunks bourbon myths, provides distillery production methods (such as recipes and barrel-entry proofs!) and creates an easy-to-read interactive tasting journey that helps you select bourbons based on flavor preferences and bourbon styles. Using the same tasting principles he offers in his Kentucky Derby Museum classes and as a judge at the San Francisco World Spirits Competition, Minnick’s Bourbon Curious cuts to the chase, dismissing brand marketing and judging what’s inside the bottle. 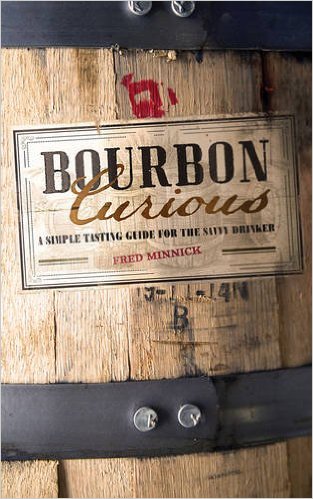 The above description is typical of bourbon books and the “debunking” is usually something bland like “all bourbon is whiskey, but not all whiskey is bourbon”. However, I was pleasantly surprised reading Bourbon Curious to see Fred digging into issues that concern Bourbonr’s. Minnick comes out swinging in the first chapter “Bourbon Politics”. He talks about Michter’s history and the controversy surrounding it as well as other Non-Distiller Producer’s (NDP’s).

What I like most about the book is how he lays out his bourbon tasting into four groups: Grain-Forward, Nutmeg-Forward, Caramel-Forward and Cinnamon-Forward bourbons. I agree with his assessment that most bourbons have the one over-arching flavor note that defines it. Bourbon Curious does an excellent job of segmenting bourbons into these four categories while also giving plenty of information about each bourbon. Each review states the bourbons proof, age, mashbill, grain origin, distillation, barrel entry proof, aging, release timing/how to find and barrels per bottling. While not all of these items have an impact on taste barrel entry proof (and its affect on taste) has been an interest of mine for quite some time. To have all of this information in one place helps to hone in your taste preferences.

Biggest takeaways from the book. Minnick confirmed that Michter’s contract distilled with Brown-Forman. While most have speculated this assumption, Bourbon Curious confirmed it. Bourbon Curious should serve as the starting point for any tasting. It’s an easy read but also serves as a reference guide for the curious Bourbonr.

I just finished reading this book and was really pleased with it. I actually got it at an event at Bourbon in DC where Fred was there signing copies of the book. I had gone just for the event and didn’t really even know about the book signing but was really glad that I picked up a copy.

Fred is making his way around the country doing a book signing thing and if he’s in your area, I’d definitely recommend checking it out. He was a great guy to talk to, especially for a bourbon geek like myself. He was also totally game for tasting different things and comparing notes.

Back to the book, I did think that the bourbon tasting notes by style was a really cool approach. It made me want to go out and pick up more of them so that I could do some of the comparisons for myself.

Good informative book and very enlighten. Really purchased the book because I wanted to broaden my drinking experience and taste for bourbon in addition to scotch and whiskey. From reading some online reviews and how some people breakdown the taste profile of a drink, I felt I needed to train my palate to do a better job. Just bought the book this week and I am not finished but I am impressed thus far with the tasting notes and the recommendation to put my tasting palate in the boot camp mode.
Some of the things that I never took notice to even though I have bought a dozen or so of bottles by them, was the two ways of the spelling of ‘Whiskey”’ while Maker’s Mark is spelled without the ‘e’ as in ‘Whisky’ like all the scotch bottles have it, I really never paid notice to all of that until now. Another thing I took notice of that was covered in the book was the meaning of the term ‘Straight Kentucky Bourbon’ on all the labels with the blending, coloring and the relations it has to rye whiskey. Just bought an Orphan Barrel ‘Barterhouse’ yesterday which is ~ 20 year old bourbon, that doesn’t have ‘Straight Kentucky Bourbon’ anywhere on it? Still yummy just the same but in relation does anyone know what’s up with that?
This is an excellent read to bone up on and would recommend to anyone wanting to get a bit of foundation and background to their drinking experience.

I just completed reading this book. Was very informative and tells more than you hear during distillery tours.