Admittedly, this is probably the most sensationalized titles I’ve used for a post on Bourbonr but there’s a reason. With the Pappy Van Winkle release in full swing there have been multiple Bourbonr’s that noticed the laser code on their bottles were 2013. In fact, there have been several states releases composed only of laser codes reflecting 2013. This led to speculations and accusations of Pappy hoarding (a felony in the bourbon world) aimed at retailers, distributors and Buffalo Trace (BT) themselves. Questions began to fly! Was Illuminati involved? Does Skull & Bones control the Pappy distribution? Did Dick Cheney have anything to do with this? All valid (sarcasm) questions so I decided to hunt for answers.

First, here’s some background from WhiskeyID about the Pappy Van Winkle lasers codes:

Dating Van Winkle bottles post-2007 is made relatively easy based on “laser codes” or “dot matrix codes” printed onto the bottles. These codes indicate the bottling line, date, and time the bottle was filled, but can sometimes be difficult to find and/or read. The date codes are usually printed on the back of the bottle below the label, though occasionally they’re above the label or under the label itself. A bright flashlight shining though the bottle from the other side will often aid in finding the code.

There are two versions of the date code layout, each with its own decoding schema:

Prior to 2007 Buffalo Trace wasn’t using Date codes, so it’s a little tougher. You can see the timeline for more clues. 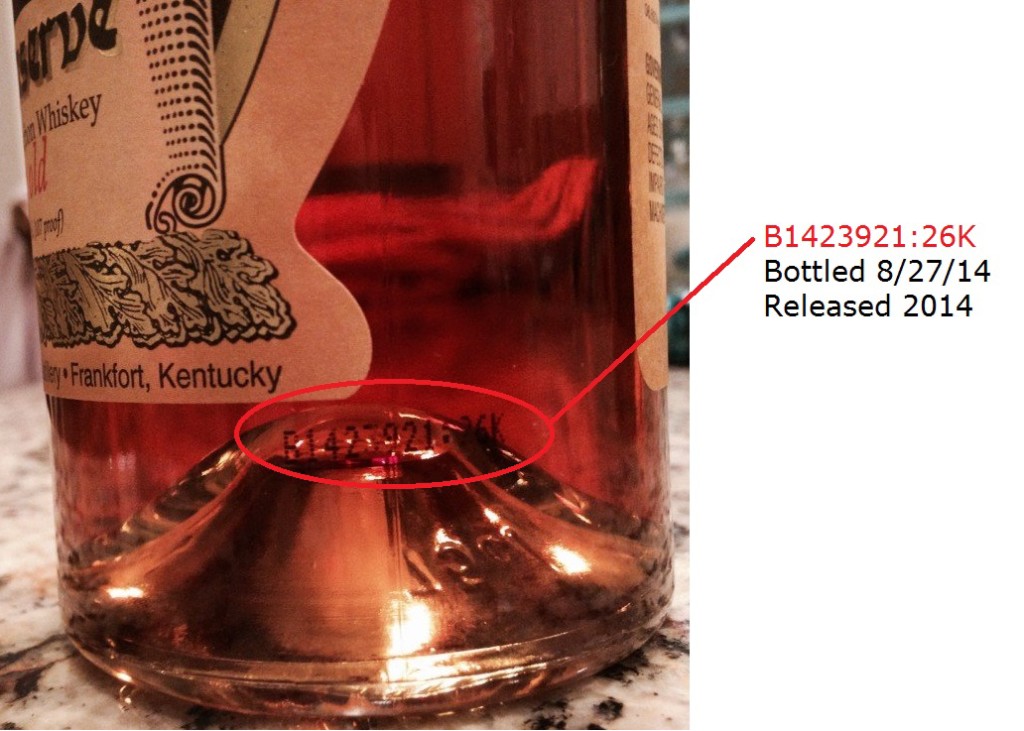 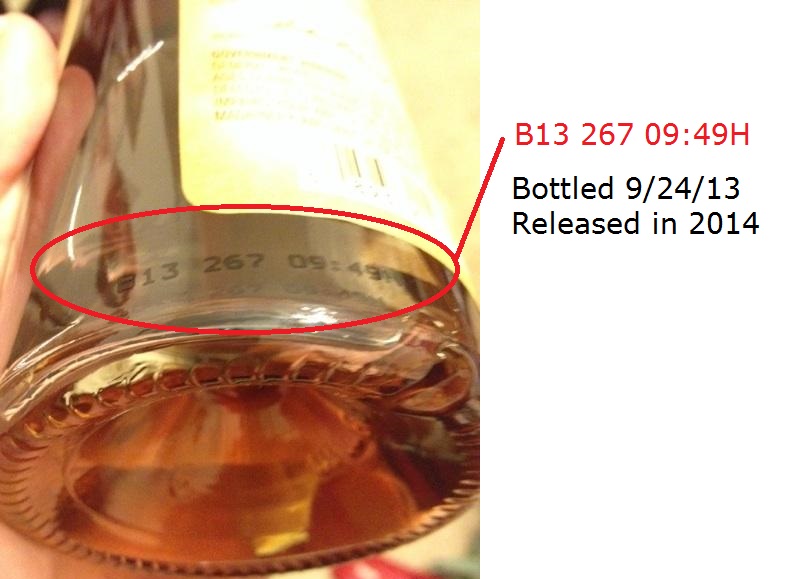 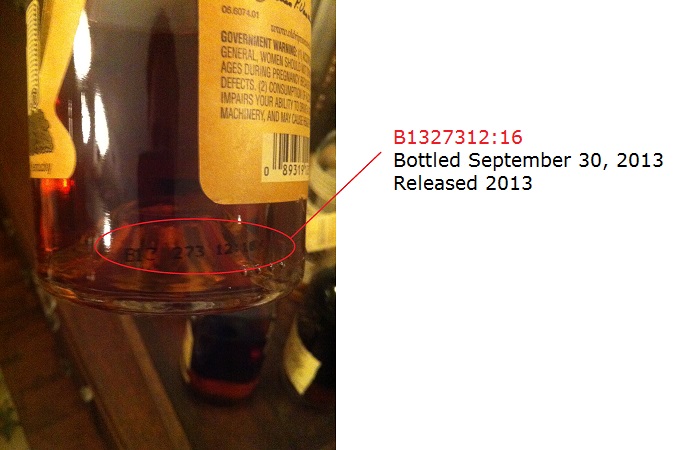 Initially, I assumed there was a bottling done in late 2013 and it was held by Buffalo Trace (BT) until 2014. This seems plausible and completely reasonable since Pappy Van Winkle makes up a very small percentage of what is bottled by BT each year. The problem is some of the bottles released in 2014 have laser codes very close to the dates of the 2013 bottling. Was someone hoarding bottles?

I reached out to Buffalo Trace about this issue and their response was about what I expected “Some of this year’s release were bottled in 2013, so the B13 would not be an anomaly to find. We will often bottle products as the bourbon is ready to bottle and we have space in our bottling schedule”. As it turn’s out Occam’s Razor proves true and the simplest explanation is the correct one.

While this isn’t as scandalous as someone hoarding large amounts of Pappy would have been it still is interesting. By my own rough estimates about 15% of this years release has had a “B13” laser code. Bottling that much Pappy a year early doesn’t exactly scream “WHISKEY SHORTAGE” either. The majority of B13’s appear to be on Pappy 15. These are probably bottled early because of the volatility in aging bourbon over the 15 year mark.

I have a 2013 15 yr pappy for sale please email about purchase live in Florida willing to ship.ronserpaio@yahoo.com

Good info, Blake. I got a Rye and also a Lot B in Illinois that were different years. Rye was a 13 and the Lot B was 12 laser code. The store only got 10 bottles and two of my buddies got a 15 and a 23 and they were the 14 code. I’m positive the store didn’t hold them, they sell them for MSRP, so I was figuring the distributor probably holds a few bottles a year back for special reasons and the 12 had been sitting there for a bit.

Definitely interesting. I wonder how many people will be paying some sort of premium on secondary sites for a 2013 pappy that is a 2014 release. Also, what does this mean as far as consistency across all 15 year?

I have a Pappy 23. Can anyone help me decipher your bottler?The laser code:
L180610107: 27N Any help would be greatly appreciated!

I mentioned this to you previously Blake but all 3 PVW20s that I purchased in Kansas had 2011 bottling codes. Very suspect to me.

I have 2 friends that both ended up with PVW20’s this year in AZ, and both had laser codes that showed a 2011 bottling. A friend in California snagged a Weller 12 year, also a 2011. Weird stuff.

Lucky friends, very hard to get a hold of in AZ this year .

Hey Pat. Yes, I think I probably know who you are talking about. Haha. It wouldn’t surprise me, 3 different stores and cities all with 2011 codes. Not that I’m complaining since it’s Stitzel-Weller, but it does seem odd.

I am in agreement that it does not seem scandalous given that the codes are intact from the actual bottling, otherwise they did not lie and put a 2013 code on a 2014 release. However, depending on how much emphasis you want to put on year to year variation within the same line, one or the other could be considered the “better” catch. I think the real story here is that BT is likely trying to manage the consistency of the year over year releases by holding some back when they know or can predict that the following years allocation of barrels won’t meet projections. So for example, rather than just distribute every drop allocated for 2013 in that years bottling, BT may say let’s hold back 15% of those bottles so that the 2014 release won’t even smaller than anticipated and therefore frustrate Pappy lovers even more.

Blake, thank you for this educational article. I immediately went to look for the laser code on the Pappy 23 I purchased last year and cannot find a code anywhere on the bottle. Can anyone tell me if I should be worried?

FYI I bought my PVW 23yr. at Buffalo Trace in 2006. It is signed by both Julian and Preston in gold marker and there is no code on the bottle. You just may have an old pappy. Hope this helps.

Finally……someone with the courage to come forward with the Dick Cheney connection!! LMAO

Look at you Mr. Nancy Drew!

>Trevor: Should you be worried? Only if you paid too much…which is more than likely 🙁

I got a bottle of 12y last year in 2014 and was lucky enough to get another 12y this year 2015 but strangely both are from the same batch and laser code in 2013. I thought that was super strange

Nothing I’ve read matches the extra digits found in this code.

I have a bottle of Van Winkle 12 year Lot B that I can’t seem to pinpoint a date on… It has no laser coding so that tells me pre ’07. Addressed in Frankfort, not Lawrenceburg, so that puts it post ’02. Any suggestions on how to get an exact bottle year?

I have the same issue with my 20. No code, but labeled Frankfort.

What does the L mean as the first letter?

did anyone reply to EZ’s decoding question ref what exactly all of the numbers mean?

Anybody have a botched laser code. I won one at Kroger and it looks like the bottle moved during the laser engraving.

I have two bottles of Pappy 15 with NO laser code etched on them. Is that possible that bottles were produced but did not get a laser code?