If you weren’t feeling the buzz of fall bourbon already you will be now! Buffalo Trace released the fact sheet for their Antique Collection. The bold is from me to highlight the important parts.

The powerhouse favorite of the Antique Collection, George T. Stagg weighs in at a hefty 144.1 proof this year.  Past releases of this uncut and unfiltered bourbon won many top awards, including twice named the number one spirit in the world by F. Paul Pacult’s The Spirit Journal. This year’s release contains bourbon from barrels filled in the spring of 2001. This batch contained 142 barrels, but not as many bottles as expected, due to some very greedy angels!  Storage location of these barrels varied across warehouses M, N, H, L and K.  Finding a bottle this fall will be difficult due to the low yield.  This whiskey tastes of dark chocolate, coffee and vanilla.

The Antique Collection’s uncut, unfiltered, wheated recipe bourbon is William Larue Weller. Previous editions of this wheater have won many accolades, including the “Bourbon of the Year” by Jim Murray’s Whisky Bible 2016 edition. The 2016 offering was distilled in the spring of 2003 and aged on the third and sixth floors of Warehouses D, K, and L.  This bourbon registers in at 135.4 proof – one of the stronger Weller releases.  The bold flavors include plum, figs and vanilla.

Thomas H. Handy is the uncut and unfiltered straight rye whiskey. The 2015 edition was named “Best American Rye Whiskey” at the 2016 World Whiskies Awards.  This year’s Handy was distilled in the spring of 2010; aged on the fourth, fifth and seventh floors of Warehouses I, K, and M, and weighs in at 126.2 proof.  The flavor has been described as toffee and cinnamon. 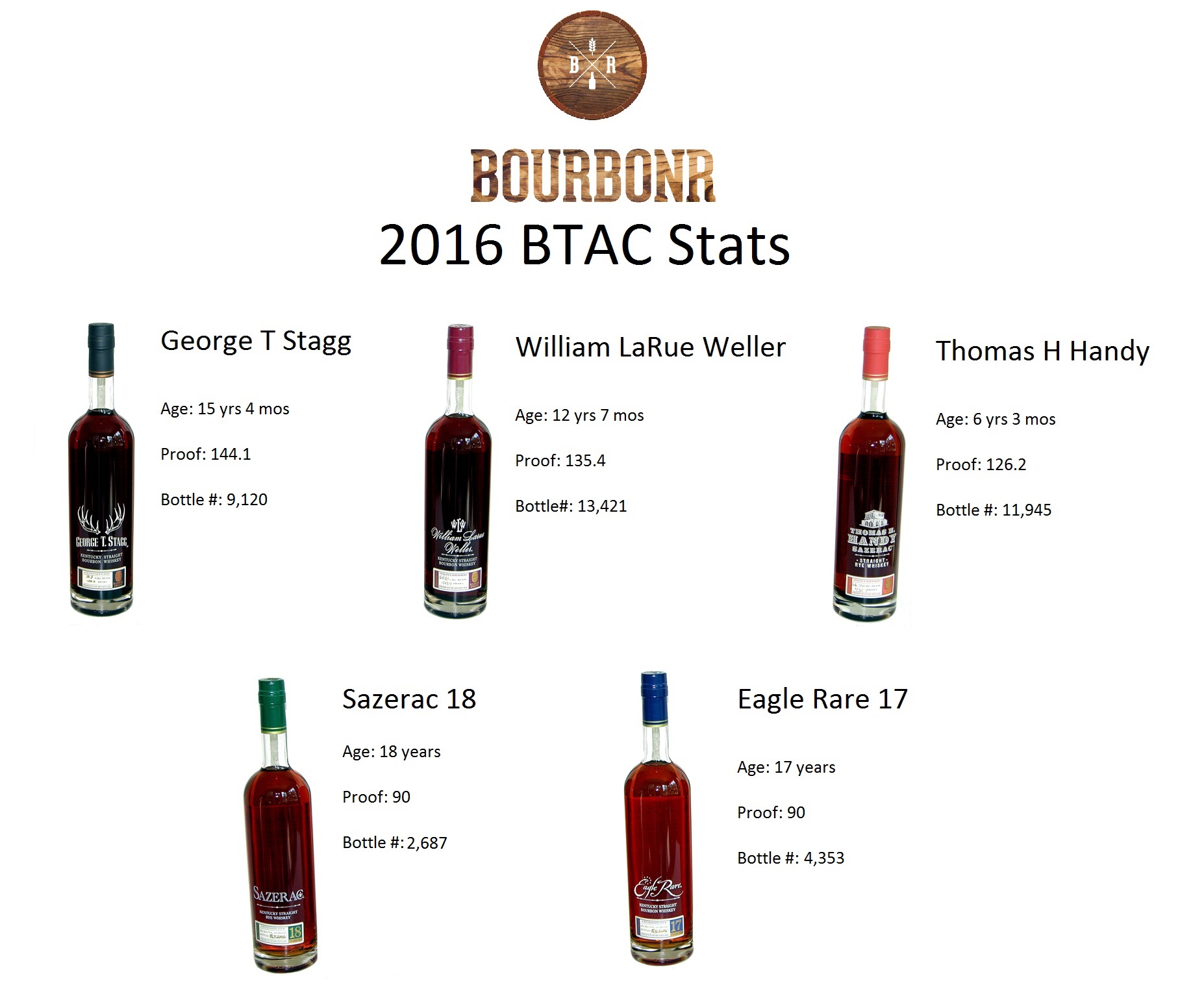 The previous edition of this bourbon was honored with a Silver Outstanding Medal at the 2015 International Wine and Spirits Competition. The 2016 edition has been aging on the first, second and third floors of Warehouses H and K.  This 90 proof bourbon was aged for seventeen years and tastes of leather, vanilla, tobacco and toffee.

Last year Sazerac Rye 18 Year Old was named the Best Rye Whiskey 11 Years and Older by Jim Murray’s Whisky Bible 2016 edition.  This 2016 straight rye whiskey release has notable flavors of smoke, clove and all-spice with a dry finish.  The barrels for this whiskey were filled in April of 1998, making them the first “new” batch in years not drawn from the stainless steel tank as the previous past few editions have been.  From this year onward, this whiskey will be drawn directly from barrels put away for 18 years, versus using any tanked whiskey.

The Antique Collection was introduced more than a decade ago and has become a cult favorite among whiskey connoisseurs. Since 2000 these whiskeys have garnered numerous awards from such notable publications as Whisky Advocate Magazine, Spirit Journal,and Jim Murray’s Whisky Bible.

The 2016 Antique Collection whiskeys will be available in limited quantities starting in late September or early October.  Suggested retail price is $90 each.  For more information visit http://www.buffalotracedistillery.com/brands/antique-collection. 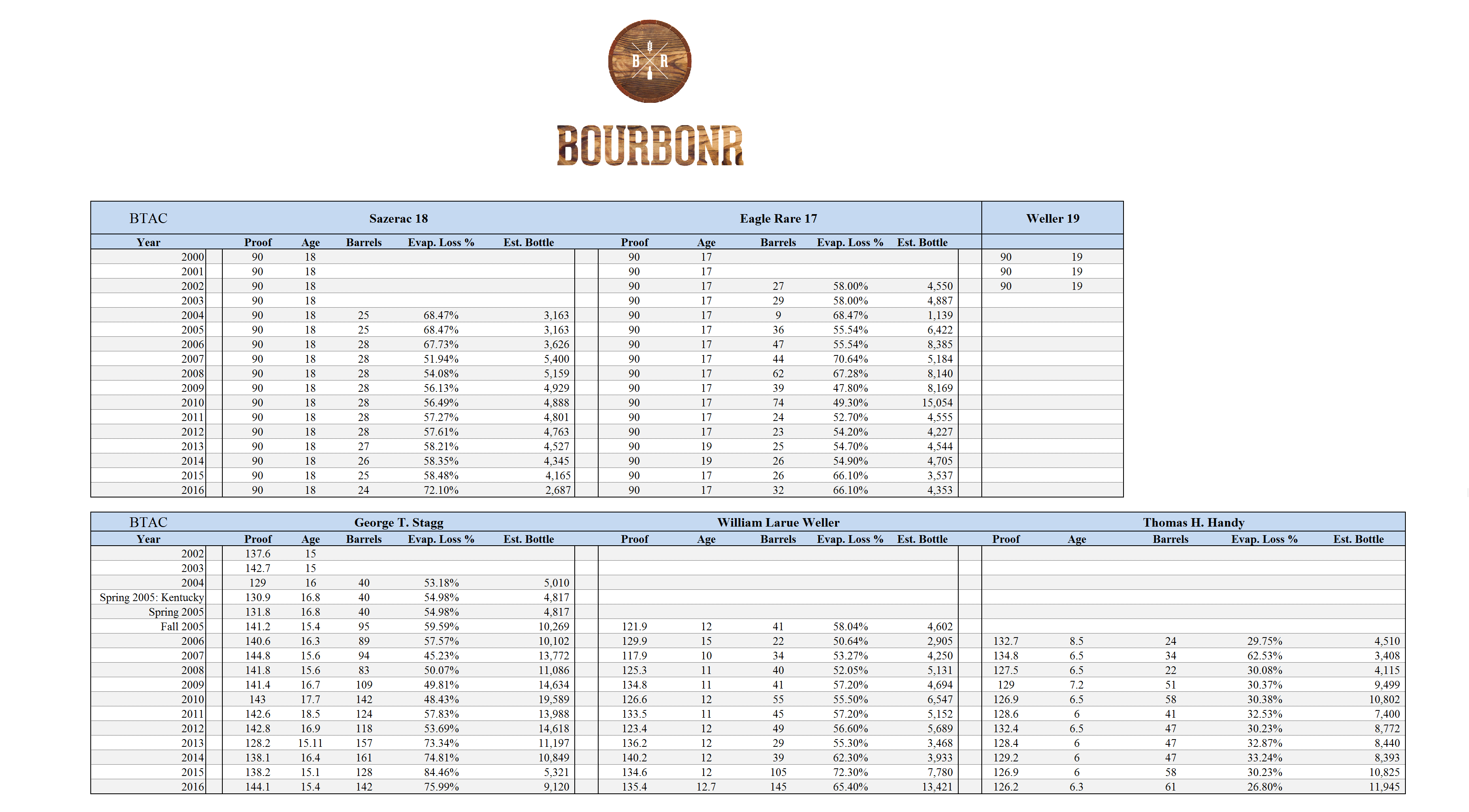 Look at those WLW volumes…no wonder there’s no standard Weller 12 year to be found.

I thought the same thing. Also, a lot of stores have been getting into the private selections of OWA. So, I’m guessing that is cutting into the reserves also.

Since these whiskies are essentially 100% unavailable through any retailer I know of, I’ve totally lost interest in the BTAC the last few years.

Since 2013, he’s been able to procure zero product whatsoever. Whatever BTAC makes it into my state nowadays gets swallowed up in the distribution chain black market, and sold at “market” prices(ie., prices for Stagg begin around $400).

Apologize for the butchered sentence above.

If you’re interested on getting your hands on a couple of these bottles I’ve got them.

Which bones do you have and how much?

I enjoy as much George T Stagg and William Larue Weller that I can find. Generally that means paying top dollar at a well stocked Bourbon bar somewhere! I would love to actually find a bottle of each that I could actually buy. I have been on numerous lists for years and landed a bottle of Handy and Pappy.

Eagle Rare is still #1 in my book with Sazerac 18 coming second. I echo earlier comments on how this is just dreaming. What little I have left from past years will be saved for very special occasions. Until those times I will enjoy Old Scout as the next best thing.

Was able to get a bottle of this from lat years collection. It was smooth and fantastic. Put up a fight with my Pappy 12yr

I’ve lost interest also, Dan. I pity the fool looking for one of those bottles on the shelf.

I agree…..every year it gets a little worse …There is NO hunt anymore! The average Joe will waste his time, energy and gas running around different towns, counties, cities and states looking for bottles that do not exist! Most states use a lottery and a waiting list now for BTAC and PAPPY and other high demand bottles…… the distributors and retailers either keep the bottles for themselves to flip or to sell to friends and family members. There is NO such thing as a valued “good customer” anymore….I HATE it when people lie and say they found such and such a bottle of PAPPY or BTAC on a shelf….just sitting there….wtf…hell, the stores even keep OGD BiB and Rittenhouse rye “in the back” …..and considering the Army of flippers waiting to pounce on ANYTHING BTAC/PAPPY we’re supposed to believe they just hapt upon a unicorn in the wild, just sitting there, waiting to be bought…..nah….I wasn’t born yesterday, I don’t believe it!

I got three last year.

Hey Joe! Which ones did you get? Did you get them at MSRP? Hope you’re enjoying them, lifes too short! Good Luck scoring some more!

Hoping to luck into some Weller/Stagg this year. Been putting in the work with local shops, so we will see if it pays off. Good luck to all in the upcoming season.

If anyone in Chicago wants to do a little team shopping, let me know!

By all means let me know if you’re interested in Chicago team shopping, how do you want to touch base? I am hopelessly optimistic for a BTAC bottle, any will do. Or maybe even the bigger unicorn of a 12 year Weller.

Hey Jeff – Hit me up at theroy@gmail.com

Hey Ryan, I’m down. Whats the best way to get in touch?

Sounds like we have a few folks in the mix – theroy@gmail.com

Unless you’ve been kissin’ butt and lickin’ boots all year, you won’t get a bottle of any. Too many unsavories with shady chatacters are in the whiskey business now trying to flip a damn bottle of whatever for a profit margin of be between $50/$100….damn,why even bother with such a menial profit? Straight up Ghetto mentality!

My butt kissin lips and leather shinin tongue are raw, but ready

I got lucky with a stagg this year

@blake any release maps this year for pappy or btac? Can’t seem to find them. Thanks

Yes. BTAC will launch next week

its really driven by our insatiable ego for the mighty one ups man to have that limited bottle that is so very difficult to come by. there is so much good stuff out there that btac is over shadowing with their adds and bluster. i like good whiskey no matter the name or the house name or floor from which it hails. price is not what makes it a good product..

buy what you like and drink it well and safe

As much as I want to dismiss the BTAC as a bunch of unicorns that I’ll never, ever be able to nab a bottle of and therefore not worth thinking much of, I keep running into one problem: Stag is hands down the best tasting bourbon I’ve ever had, in any release year. So as much as I agree with the idea of enjoying all the good bourbon that IS accessible to the common drinker, it doesn’t change the fact that my pick for the best is still something I can’t get my hands on.

So if I am reading this correctly, the stag and weller numbers are going to be a lot higher this year?

Suggested retail price goes up $10 dollars, so you can bet liquor stores will raise their prices $50-75 more this year.

Last year when it hit my state I went to a couple of stores – one grocery store had a THH and a WLW, said I could have one, and I picked the WLW. MSRP. The store where I do the majority of my shopping held a WLW and a Saz18 for me. Won a lottery for a THH. And about 3 weeks later I went in another store where I shop a lot, and the owner pulled out a ER17 from behind the counter. Never paid more than about $10 over MSRP for any of them. So it can be done. I don’t pay secondary.

Blake, I can’t wait to see what you think of this year’s lineup, particularly the new Saz. I tasted and put up some initial reviews based on drinking about half of the tiny bottles, and will be returning to them in a week or so to collect my thoughts.

Id love to know if anyone has any luck finding Pappy or BTAC or WLW 12 or Forrester Birthday in Michigan.