FRANKFORT, FRANKLIN COUNTY, KY (Sept. 19, 2017) Whiskey lovers rejoice, Buffalo Trace Distillery is releasing its 2017 Antique Collection. The highly anticipated collection will once again feature five limited-release whiskeys of various ages, recipes and proofs. Master Distiller Harlen Wheatley notes, “The team had another great year with the Antique Collection.  From distillation, to barrel selection, to bottling, this year’s collection showed very well.  I was particularly excited about the William Larue Weller with its extra richness, and the Eagle Rare 17 seemed more rounded and full of flavor.  None of these disappointed.”

Here’s what fans can expect this year:

The powerhouse favorite of the Antique Collection, George T. Stagg weighs in at 129.2 proof this year.  Past releases of this uncut and unfiltered bourbon have won many top awards, including “5 Stars – Highest Recommendation” by F. Paul Pacult’s The Spirit Journal. This year’s release contains bourbon from barrels filled in the spring of 2002. This batch contained 309 barrels, a few more than last year.  Storage location of these barrels varied across warehouses C, K, M and Q.  This whiskey tastes of expresso, chocolate fudge and tobacco.

The Antique Collection’s uncut, unfiltered, wheated recipe bourbon is William Larue Weller. Previous editions of this wheater have won many accolades, including a Double Gold Medal at the 2016 San Francisco World Spirits Competition and “Bourbon of the Year” by Jim Murray’s Whisky Bible 2017.  The 2017 offering was distilled in the winter of 2005 and aged in Warehouses D, I, and P.  This bourbon registers in at 128.2 proof.  The bold flavors include toffee, marshmallow and leather. 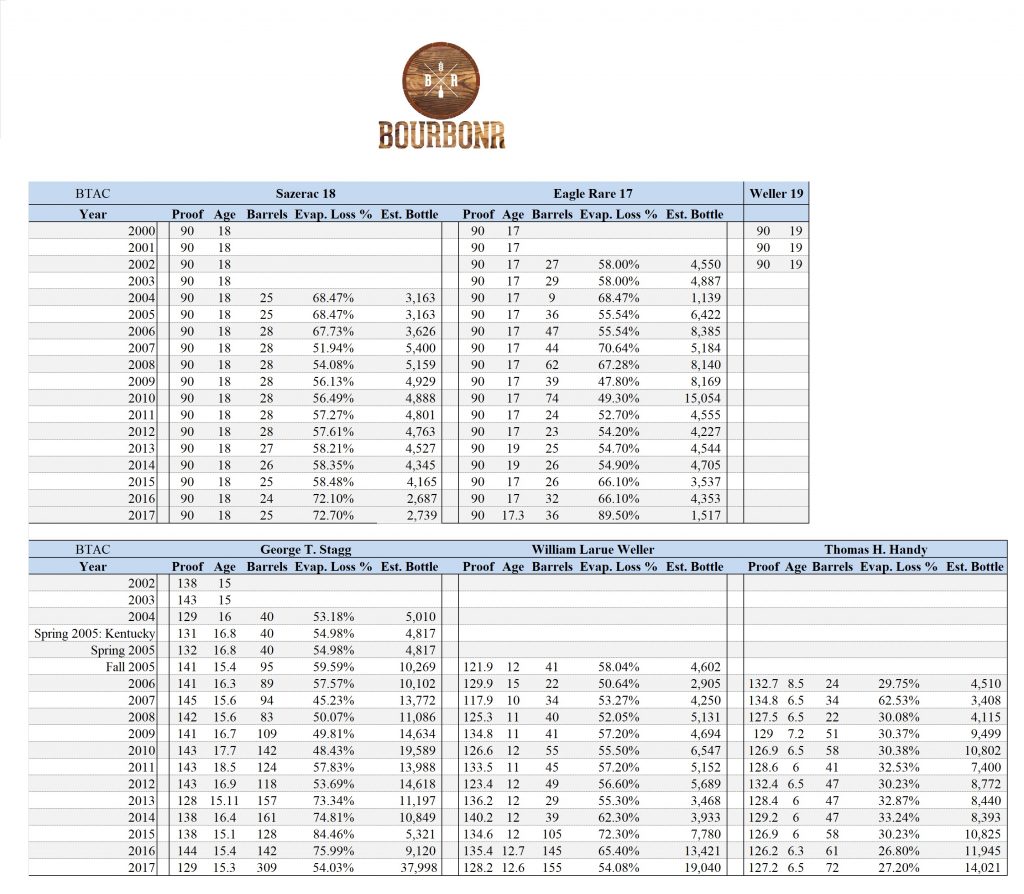 Thomas H. Handy is the uncut and unfiltered straight rye whiskey. Previous editions of this whiskey have been named “World Whisky of the Year” by Jim Murray’s Whisky Bible and “World’s Best American Whiskey” by Whisky Magazine.  This year’s Handy was distilled in the spring of 2011; aged on the third, fourth and fifth floors of Warehouses K, L, and Q, and weighs in at 127.2 proof.  The flavor is described as fig, allspice and cinnamon.

The previous edition of this bourbon was honored with a Silver Outstanding Medal at the 2017 International Wine and Spirits Competition. The 2017 edition has been aging on the first, second and third floors of Warehouses C, K and P.  This 90 proof bourbon was aged for seventeen years and tastes of oak, tobacco, toffee and vanilla.

Last year Sazerac Rye 18 Year Old received “4 Stars – Highly Recommended” by F. Paul Pacult’s The Spirit Journal.  This 2017 straight rye whiskey release has notable flavors of leather, clove and all-spice.  The barrels for this whiskey were filled in the spring of 1998, and then put into a stainless steel tank in 2016 to stop further aging and evaporation.

The 2017 Antique Collection whiskeys will be available in limited quantities this October.  Suggested retail price is $90 per bottle.  For more information visit http://www.buffalotracedistillery.com/brands/antique-collection.

Always interesting to read about the new releases I’ll never get my hands on at any price, let alone the $90 MSRP. Sigh…

Already got my hands on a Sazerac!

Awesome write up -thank you!

I’m always excited for the BTAC each year, but I have yet to actually get my hands on anything from it sadly. haha

Handy is always between 6-7 years. This year’s is 6 years and 5 month. I find the Handy to always be a solid barrel proof rye that doesn’t vary nearly as much of the other bottles in the collection from year to year.

I was fortunate enough to land 3 out of the 5 in the antique collection from 3 different liquor stores last year. WLW, ER17 and GTS. Believe me it took a lot of schmoozing the local liquor store managers with a lot of attention to friendship and even some birthday gifts. I will be happy to land any one of these this year. The best part is the actual hunt. It is open season… Good luck everyone!

I scored the GTS!! Sweet talking is key-

I would really like to get my hands on either the Stagg or the Saz 18. Actually I’d be happy to find any of these whiskeys. Just bought a house though so time and money are not on my size. I can at least take some solace in the fact that soon I’ll have a house with a bar and lots of space.

Yaaaaawnnnn. Just burned out on this whole bourbon bs. Each year for the past 3yrs. so called limited release prices rise, age statements drop and quality gets worse and worse. Top to mid shelf is now the new high price ‘status symbol’ collecting dust in collections and black markets. Go to any distillery, liquor store or bar to buy bourbon it’s like ‘just shut up and give me your money and leave we have all the business we need. Use to wonder how the bourbon boom would eventually impact the industry and its product, now I know.

You gonna have another release map this year Blake?

Can I please get a copy or tag on the map

Blake you gonna have a 2017 release map? can you send me a link please sir

Yes please, me as well

So I dumb lucked into the only liquor store that does not have every thing on a multi-year waiting list. They have the Handy/Weller/Stagg for sale at $349. PVW is due in on Friday first come first served.