There are several lists  of  “Pappy Van Winkle Substitutes” floating around. However, some of them are full of errors while others are just a list of several popular bourbons/ryes. I decided to put together a list of a few bourbons that will make a decent substitute for Pappy Van Winkle as well as include the reasoning for why they will be a good substitute. Technically, Pappy is only the 15, 20 & 23 year. The 10, 12 (Lot B) and rye are Old Rip Van Winkle. I use the terms interchangeably since most people just want “pappy” whether it’s 10, 12, 15, etc.

As I explained in a previous post a W.L. Weller and Weller Antique blend makes a great Pappy Van Winkle Alternative. These bourbons would most closely resemble the Old Rip Van Winkle 10 year and Lot B (12 year).

Buffalo Trace uses the same mashbill for Pappy (all but the 23 year for the 2013 release). While Old Rip Van Winkle probably gets first pick of the barrels the Weller line is still good bourbon at a much cheaper price. More importantly, you can usually find them sitting on liquor store shelves across the country. 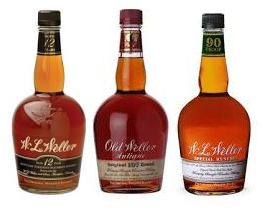 Yes, I know this is a part of the Weller line but it can be just as hard to find as Pappy Van Winkle so I separated it. The 2013 release is 12 years and one month old. Basically, William Larue Weller is Old Rip Van Winkle Lot B on steroids. Consider yourself lucky when you find a bottle of this (and send me a sample :)).

Sku of Sku’s Recent Eats published a list on his blog of all of the wheated bourbons available. If you aren’t able to track down any of the above mentioned bourbons you may want to give some of the bourbons on his list a shot. Yes, Makers Mark is a wheated bourbon (the small amount of rye used in most bourbon recipes is exchanged for wheat). While I do enjoy Makers Mark I don’t think it would win a head to head battle with any of the Pappy Van Winkle bottling’s.

Thank you for the clear and detailed explanation of your list. I will definitely use your guide.