This Spring (or late Winter) Jim Beam released a special edition Booker’s bourbon to celebrate the 25th anniversary of the Booker’s brand. While the bourbon was excellent the packaging and bottle was some of the finest packaging I’ve seen. Booker’s has always come in a wooden box but for the special release Beam added a new bottle design as well as 25 quotes, or Bookerism’s, from Booker Noe. Each box had one quote in it and they range from insightful to just plain funny.

The man behind the design is Marc Wendt. Marc is the former Creative Director of LPK. We recently caught up with Marc to talk about the design and to get a little more of the back-story on the design. Great bourbons usually have a story that go with them. In Booker’s 25th case the packaging and bottle tell that story.

B – Tell us a little bit about yourself (background, design work, other items you’ve designed)

M – I am a Creative Director with 16 years of experience, most of which has been Spirits, Beer and wine focused. I was born, raised and still reside in Kentucky, sparking my interest in distilled spirits. Some other things that I have designed are: Jim Beam Signature Craft, Devil’s Cut (one of my personal favorite projects), Old Crow, Knob Creek Single Barrel and of course Booker’s 25th Anniversary to name a few.

B –  How did you get the responsibility of designing the Booker’s 25th packaging?

M – While working for LPK, I was the Creative Director over all of the Beam bourbon / whiskey brands. Everyone wanted to work on this project, we all knew that this had the potential to be something really special. We put together a terrific team, everyone at LPK was super inspired to be a part of this. We had tons of great design options that we delivered back to Beam, their reaction was amazing.

B –  Give us a little background about the thought process that went in to this design?

M – The people at Jim Beam were amazing at including the LPK design team in everything. Over the years of working on various projects I gained exposure to Fred Noe, he always had something to say about Booker, I always took note of his stories. This firsthand experience made the thought process simple, “honor one of the greatest whiskey men ever”. They have a saying at the distillery “You come as friends and you leave as family”, they certainly made everyone at LPK feel like family.

B –  There’s a lot of meaning in the packaging. Did the Noe family play a role in providing information?

M – As mentioned, my exposure to Fred and Booker’s wife provided tons to go on. Even everyone at the distillery that worked with Booker shared a story here and there. You can instantly figure out how respected the man was and what he meant to his family. Beyond the Noe family, Beam has a great marketing team, they certainly ensured the success of the project.

B –  We all love the picture of Booker on the rocking chair and the Bookerism’s but what are some of the “less obvious”  items in the packaging?

M – There is a lot behind the package, this is a very storytelling design. I was told at one point that one of Booker’s favorite spots was his rocking chair. If you go to the distillery you will see the statues of Booker in his beloved spot. Knowing that these bottles were to be filled with some of the last bourbon Booker would have made, taking him out of the chair was meant to pay tribute to him. Some of the less obvious pieces are the inclusion of his loyal companion and the images on the Bookerisms. I changed out the images on a few of them that had numerical relevance.

B – Have you always been interested in whiskey or bourbon design?

M – A funny story, my wife has a picture that she took of me touring Maker’s Mark during my final year of design school. She remembers me saying this is the stuff that I really want to design minutes before she took the picture. About 16 years almost to the day, I was at Maker’s  Mark picking up the first LPK / Maker’s Mark project.

B –  Most important question. I need three bourbons. Your two favorites and your daily dinker?

M – My three favorite bourbons: Knob Creek Single Barrel (special occasions), Knob Creek Rye (not a bourbon, forgive me) and my daily drinker, yep Knob Creek Kentucky Straight. You can ask anyone, I was a Knob Creek guy well before I ever knew anyone at Beam.

If you’re looking for someone to help with design or branding at your company feel free to shoot Marc an email. Marc and his team at BrandFuel Co. would be happy to help

Also, thank you to all of the Bourbonr’s that sent in pictures of their Bookerism’s! While I would have like to buy 25 bottles of the Booker’s 25th Anniversary I’m not sure my wife would have been happy about the purchase.

Booker’s # 1 – “I know bourbon gets better with age, because the older I get, the more I like it.”

Booker’s # 2 “Bourbon is the American Spirit. Made in America, by Americans….Now here’s looking at ya!”

Booker’s # 3 “Goes well with dinnertime… or just about any time, for that matter”

Booker’s #4 “A respectable amount of bourbon to pour in a glass is about two fingers worth. Lucky for me, I have big fingers.” 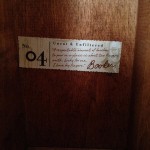 Booker’s #5 “Outlawing alcohol was the dumbest thing the government ever did. People aren’t gonna go without their toddies, their pick-me-ups… Hell.” 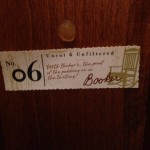 Booker’s #7 “Why would I drink just plain water, when I could flavor it with bourbon?”

Booker’s # 9 “It takes me years to make our whiskey. Fortunately, it doesn’t take me that long to drink it” 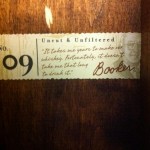 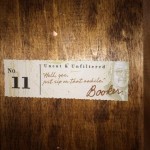 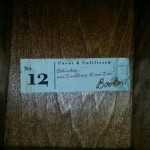 Booker’s # 16 “Favorite flavors? Hell, I like just about everything” 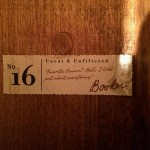 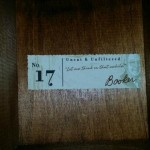 Booker’s # 18 “If you are not completely satisfied with Booker’s Bourbon, send back the unused portion and we’ll drink it!” 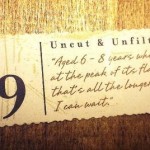 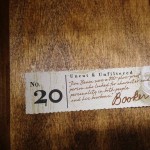 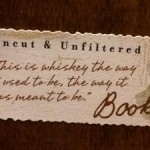 Thank you to everyone that submitted a quote!

You’re right! I can’t find it either. You wouldn’t happen to have it at Olympic Tavern would you?

I have a Booker’s 24 but cannot figure out out to post it or get it to you.

I did mine (#8) by visiting the site on my iPhone and attaching a pic I took with it. Or you could list it here without the pic. It’d be fun to have the last one we need!