Every few months Mark Brown, Buffalo Trace Distillery CEO, sends out an update email with different happenings from around the distillery. They usually include things like distillery events, updates on Warehouse X  or the continued “bourbon shortage” recap. However, today’s email (you can read the whole thing here) included some intriguing information that I think most Bourbonr’s would be interested in.

If you’ve read the email skip down to the “Fall Releases” section. The first paragraph is typical “there’s a shortage so don’t expect to find any” then there’s this:

Please be warned that finding a bottle of this year’s batch of George T. Stagg will be harder than ever. This batch contained 128 barrels, a similar size batch as in previous years. Unfortunately these barrels yielded very little whiskey. Some of the barrels were nearly empty, containing only 1 or 2 gallons. Storage location of these barrels varied across a number of warehouses and several floors, but 84% of the original whiskey was lost to evaporation.

Whoa! I know Buffalo Trace isn’t lying when they talk about shortages, but this is a considerable hit.  For George T. Stagg, the evaporation loss has averaged 56.35% over the last 13 years. Yes, the last 2 years of evaporation loss have been in the 70’s but 84% is a jump. There will probably only be 5,400 bottles of George T Stagg in the 2015 release. This is tragic news for those of us that love GTS! 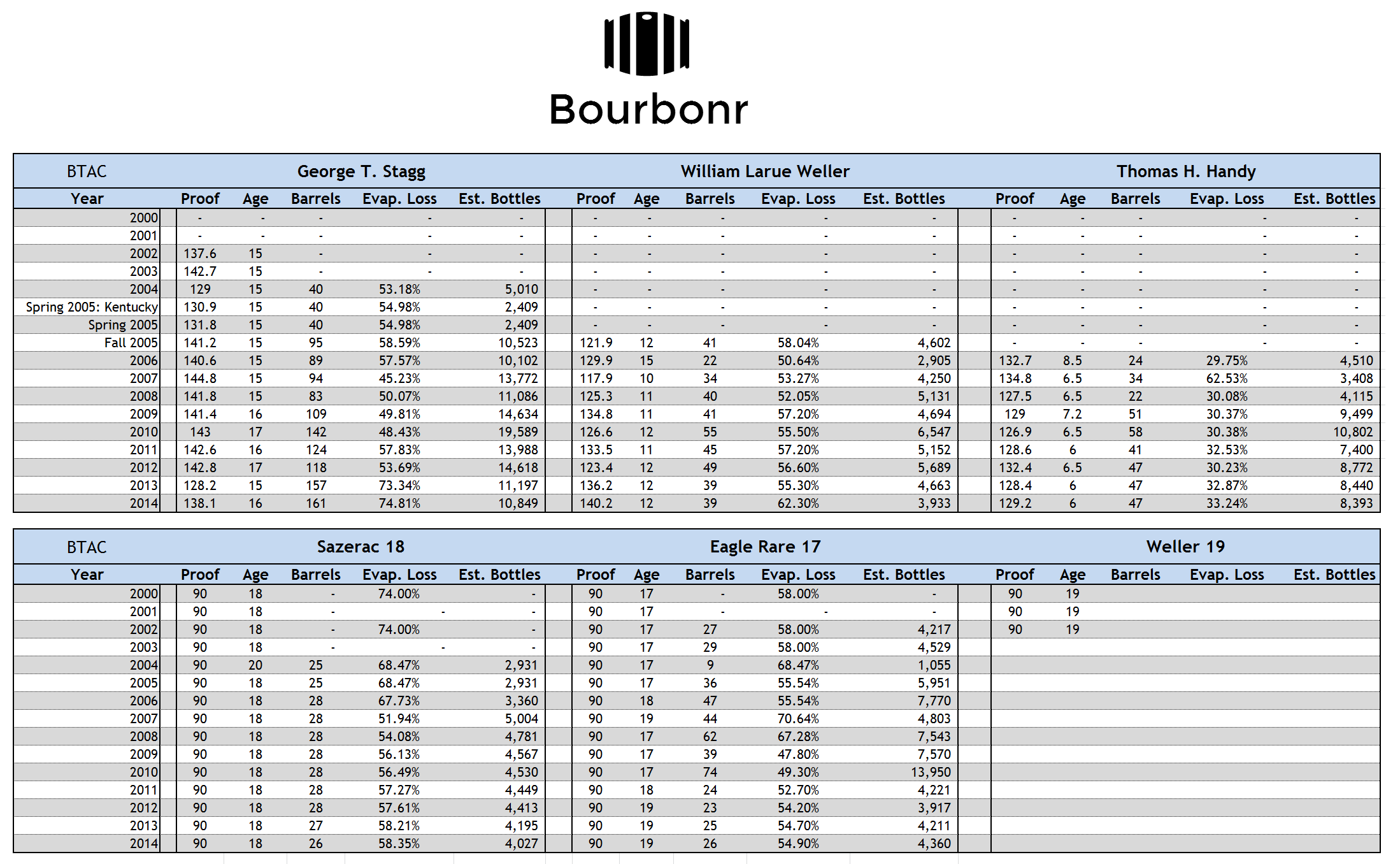 In other news, there’s this: “Also this fall, in late October, the Van Winkle bourbons will again be released.” Of course you can always track the progress at the Bourbonr 2015 Pappy Van Winkle Countdown

Been nursin’ the bottle from last year (got 2 more for back up!!). Drink more WT101 & you ain’t gotta worry your pretty little heads about it!

No wonder why the world has gone sh*t! All the angels are all drunk on Stagg.

Damn it! Unreal! I had my mouth fixed on enjoying some STAGG this year. Now, the black market will charge whatever the hell they want for a bottle tenfold now! I refuse to die until I have a glass of that STAGG STUFF!!!

What they should do, is put the juice in smaller bottles to accomodate the loss. This way, more folks would get to enjoy some.

Shorter bottles that can actually fit on a shelf? Yes
Half size bottles that will be empty before the next release? No

I’d rather not have something at all than not have enough of it. You don’t need to rely on the black market for GTS. If you want to try it, go to a high end whisky bar and have a pour, plenty around the country have it. If you want a bottle, start forming relationships with managers at liquor stores that get allocations and get a regular sized bottle at a good price.

I disagree about the bottle size. I always prefer a full size bottle but in this case it makes sense to release it in the 375 ml size so more consumers have a chance to purchase one of their own. I’ve had enough of those $15-20 shots at the bars. Ripoff!