A few months ago, these (self-proclaimed) “Nerdy Posts” popped up in the Bourbonr Facebook group. They were concise and well researched. And, the feedback and discussions from readers were excellent. I reached out to my friend Henrik Brandt, the man behind the posts, to see if he would be interested in doing an expanded version for the Bourbonr blog. This will be a recurring series on the Bourbonr blog. I hope you enjoy! Henrik is based in Copenhagen, Denmark and is an admin in the Nordic Bourbon Community Facebook group. He will be publishing a book about American Whiskey in November and you can follow him on Instagram via @the_bourbon_nerd

Today we look at the term “Barrel ENTRY proof”. This term should not be confused with the almost-similar term “barrel proof”. And to avoid that confusion, let’s look at the latter: A barrel proof whiskey is (typically) not diluted at all – but pretty much put into the bottles straight from the barrel. “Barrel proof” is not an official term, and you will see manufacturers refer to this as “barrel strength”, “cask strength”, “full proof”, etc.

This update is about barrel ENTRY proof and that is something very different – but hugely important. It is also something that the manufacturers tend to keep a little to themselves – and you will know why when you have read this post. “Barrel entry proof” is the proof level of the new whiskey (white dog) that goes into the barrels for the aging process. The new whiskey is normally 130-140 proof when it comes out of distillation – but you have to add water to it, before it goes into the barrels. By law, the proof cannot be higher than 125, when entering the barrels. Several manufacturers go up to that 125 limit, but there is a growing number of barrels that are being filled with a lower proof.

As it turns out, a lower entry proof seems to produce better whiskey – but it is also more expensive.

Curious why the whiskey is better with a lower entry proof? I will explain the three primary reasons below. 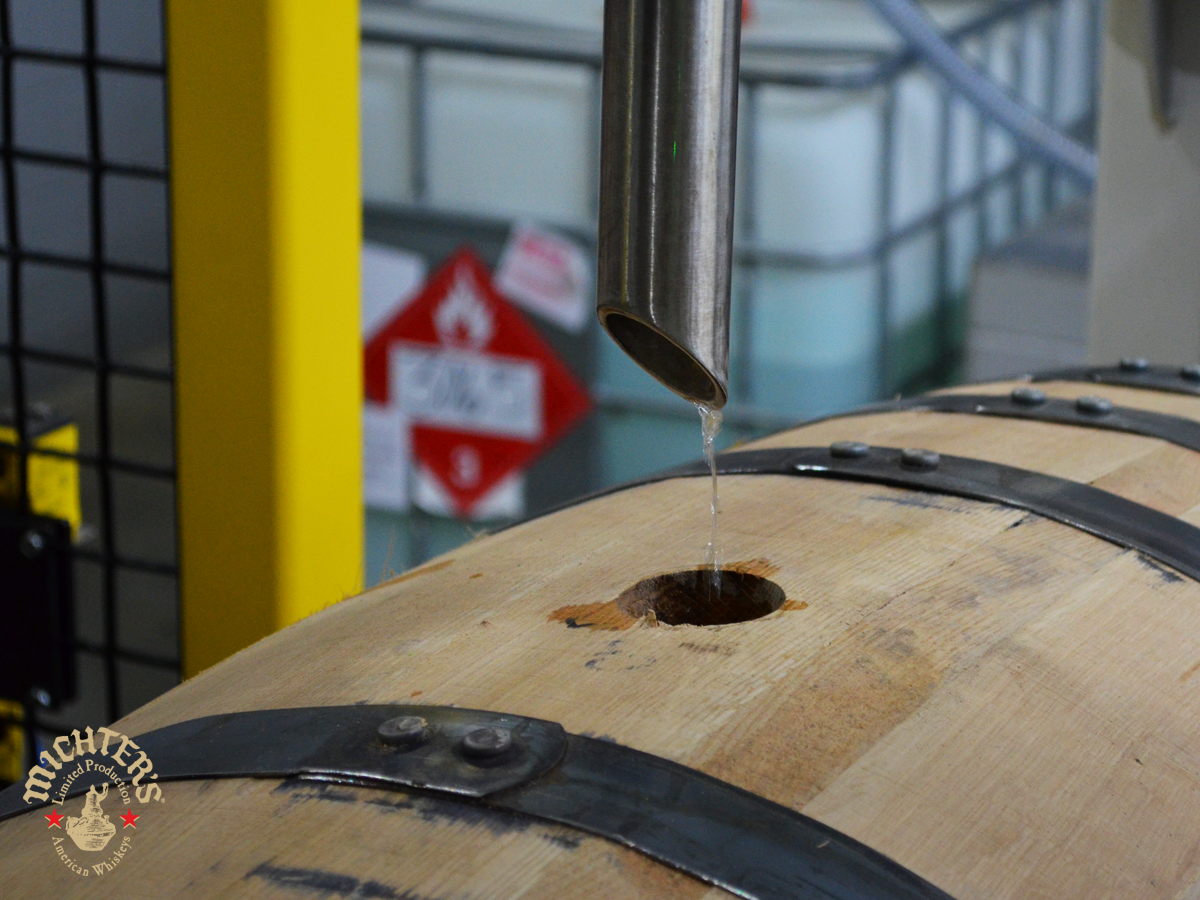 The first one focusses on the premise, that the lower proof will make it easier for the liquid to dissolve the sugars in the wood. High-level this makes sense, as the water molecules are smaller than the alcohol (ethanol) molecules – and thus easier to penetrate the wood. I have done some research on exactly what goes on – and even though this is a nerdy post, a full explanation will be too boring.

The second one is (sort of) linked to the first one: As the lower-proof liquid is penetrating the wood, the water will dissolve some of the “phenolic” compounds. Once dissolved, they will start to oxidize – and some of the unwanted tough and tannic flavors in those compounds will start to recede. You can read a more about this in a great article that Fred Minnick wrote for Whiskey Advocate here: http://whiskyadvocate.com/secret-science-proof-and-barrels/

The third one is based on pure math; Adding more water in the beginning, means that you need to add much less water in the end – and you therefore have more of the “original” distillate left in the bottle. If you have not fallen asleep already, let me try to explain what is going on – and sorry for all the calculations!

Let’s say you decide to go down from the legal maximum of 125 proof to 103 proof, when you dilute the new whiskey that goes into the barrels. The new whiskey from the distillation process is probably around 140, so you will need to add around 15 gallons of water to get from 140 to 103. If you had decided to go for the maximum 125, you would only have to add a little more than 6 gallons of water to get from 140 to 125.

Initially, you would think “How can adding more water be better??” Hang in there and let’s fast forward e.g. six years. The proof in your barrel has now (most likely) increased from 103 to 110 – as proof almost always increases during the aging process. Had you gone with the maximum of 125 proof, it would probably have been around 135 proof, by now.

If your plan is to sell your whiskey at 90 proof, you would now have to add another 10 gallons to proof down from 110 to 90. In case you are doing the calculations yourself, I have worked under the assumption that there are only about 44 gallons left of the original 53 gallons, due to evaporation over the six years. Had you gone with the maximum 125 proof – that would now be up to 135 – you would need to add whooping 22½ gallons of water to cut it down from 135 to 90.

So …. the total amount of water you added in the entire process from the new whiskey left the distillation process at 140 proof, to the reduction to 103 proof into the barrel, to the increase to 110 proof during the six years, to the final reduction to 90 proof in the bottle – you had to add a total of 25 gallons of water (15 initially and 10 at the end).  Had you instead decided to start at 125 proof, you would have needed 3½ gallons more (6 initially and 22½ at the end):

In conclusion: A low barrel entry proof is more expensive to make because it requires less water (and water is obviously less expensive than the distillate). Your whiskey is, therefore, less diluted – and that’s a good thing.

Phew … enough with all those calculations …. I think we all need a Bourbon.

I’ve got no proof of this but to me the last part makes the most sense, that the extra water at the beginning spends all that time in the barrel. Another way to think about it is if you water it down at the beginning you are going to need more barrels which means more wood in contact with the whiskey while it ages.

I enjoyed reading this article. I imagined sitting with Henrik in a dimly lit establishment in Copenhagen sipping a Bourbon as he explained this all to me. Cheers to more from Henrik.

If you are in Copenhagen – look me up!

I belong to a brew / distillation club in St Louis, Missouri. If you ever get a chance to come by St Louis look us up. We make some great whiskeys and rums.

This is wonderful. Well explained, interesting, sufficiently esoteric and advanced, and yet apparently critical to taste and quality.

This is excellent information. I would comment that most distillers use the terms Barrel Proof and Cask Strength interchangeably, but all the bottling I know of that use the term Full Proof are bottled at barrel entry proof and are in fact not barrel proof. In short they add water after aging and before bottling, but take the proof back down to what ever that whiskey’s barrel entry proof was before the aging process caused the proof to go up in the barrel.

To your very good point: The upcoming Weller “Full Proof” product is exactly what you described – a whiskey that is watered down, even though it is called “Full Proof”. Buffalo Trace explains that the “Full Proof” statement should be interpreted as “the proof in the final product is the same as the barrel entry proof (114)”.

I appreciated the article. Well written and informative.

I have a question that relates to the subject. There are two ways to achieve low barrel entry proof. The one you address is to use water to proof down the distillate. Another way would be to distill the original “white dog” to the lower proof desired and not add water.

What are your thoughts on the implications of distilling to a lower proof rather than watering down a higher proof white dog?

You are absolutely right. As far as I have been able to tell (after discussing it with a couple of master distillers), it boils down to two things; Money and the purity of the distillate. It is less expensive to simple add water after the fact, since the distillation process will become the bottleneck with a lower-proof white dog (you would have to make more white dog, if you did not add water). Regarding the purity argument, I will do little research. I guess that it may be easier to remove methanol, fusel, etc. if the second distillation (a.k.a. “High Wine”) is at a certain proof level.

Scott, you could do that, but distillation removes more than just water from the mash – it removes all kinds of impurities that, if left in the final product, will drastically alter the final product. The higher the distillation proof, the more impurities (along with water) you are taking out of the product. Think about the difference in how “white dog” and vodka taste; vodka is usually taken up above 190 proof through multiple distillations while “white dog” is generally kept under 160 proof, which leaves in some of the “impurities” that impact the whisk(e)y character we appreciate.

Thanks, Neal and Henrik.
I thought I had read that distilling to a lower proof was a potential 2 edged sword. On the negative side, more impurities could remain that alter the taste in ways that are not desirable. On the plus, some of “impurities” result in desireable flavors and character. So the battle is the balance.
Am I correct or totally mistaken?
Scott

Scott you are correct – the entire process is balancing act full of potential trade-offs. In the end it’s the sum of thousands of these variables that creates character.

In your example, is it fair to assume that the higher proof barrel entry loses more water than alcohol over time on a relative basis compared to the lower proof barrel?

I would have guessed that, given the lower proof has more water coupled with the fact that water evaporates faster than alcohol (hence proof goes up), the lower proof barrel would increase in proofage higher than the higher proof barrel on a relative basis (and obviously lose more overall volume along the way), and thus need relatively more water to proof down to 90.

Asked differently, what makes the proof % go up more in the higher proof barrel over the 6 years? Is that how it really happens?

As far as I have been able to research, the proof points increase at the same rate in low entry and hig entry barrels. Relatively, you are absolutely right the proof increase more in the lower entry barrels. In my example – which fairly represents the real world – the proof increase roughly 10 points in each case.Percentage-wise, the increase will be more significant in the lower proof barrels. It also seems like there is a natural limit that hovers around 140 proof. This means that the two barrels in my example might end up with a similar proof around 140 after, let’s say, 12-15 years. So.. there are a lot of variables.

Thank you! Great insight into one of the, I’m sure, many nuances of whiskey making.

What about the difference in solubility between water and alcohol. I would assume that organic compounds would be more soluble in the alcohol than water. Thus alcohol potentially can extract more flavor from the barrel.

From what I’ve read it’s actually the opposite. Things like vanillin (vanilla flavor) are more soluble in water than in alcohol.

Vanillin is actually 5 times more soluble in ethanol than water. One reason when you buy vanilla it is usually in alcohol. I’m sure all sorts of chemistry is going on in that barrel. Relatively complex mixture.