This post is a little longer than normal, but we also got a lot of ground to cover; When you have read this post, you will have learned about barrel charring basics, why it improves whiskey, what the different char levels are, what the difference between the red line and the soak line is – and what happens inside the wood itself, when it gets charred.

Barrel charring is probably one of the most exciting and spectacular things you will come across, as you learn more about American Whiskey. It is unclear how it all started – and there are a lot of interesting theories out there. The most famous one is probably about the Baptist Minister Elijah Craig and the lightning in his barn that accidentally charred his barrels, during the ensuing fire. The story is very likely not true – but it would have been SO cool if it had. The theory that I believe in the most, is that barrel charring simply started because they were trying to remove the smell, of what had previously been in the barrels. You know .. salted fish, oil, and other goodies …. Bourbonr Note: Check out Fred Minnick’s Bourbon Curious for more on this subject.

But … this is a nerdy post – and not a history post – so if you are interested in the historical aspect, you can knock yourself out on Google, I guess – or buy one of the great books about American Whiskey.

What happens inside the wood is basically insane – and you can read about the details below.

By law, many of the American Whiskey types must be aged in new charred oak barrels (technically “containers”, but everybody uses barrels). You char the barrels on the inside using flames, obviously, and some use a gas burner, and some use a “natural” furnace, based on left-over wood from the manufacturing process.

Even though it is not actually an official scale, most manufacturers work with so-called “char levels”, and the consensus is, that the wood is burned as follows:

Level #4 is sometimes referred to as “alligator” char, as the wood looks like the back of an alligator after those 55 seconds – as you may be able to spot from in the picture above. In principle, the scale goes beyond level #4, and there was a famous example of this a few years back when Buffalo Trace released one of their experimental bottles with a level #7 char. According to them, they had charred those barrels for a whopping 3-3½ minutes: 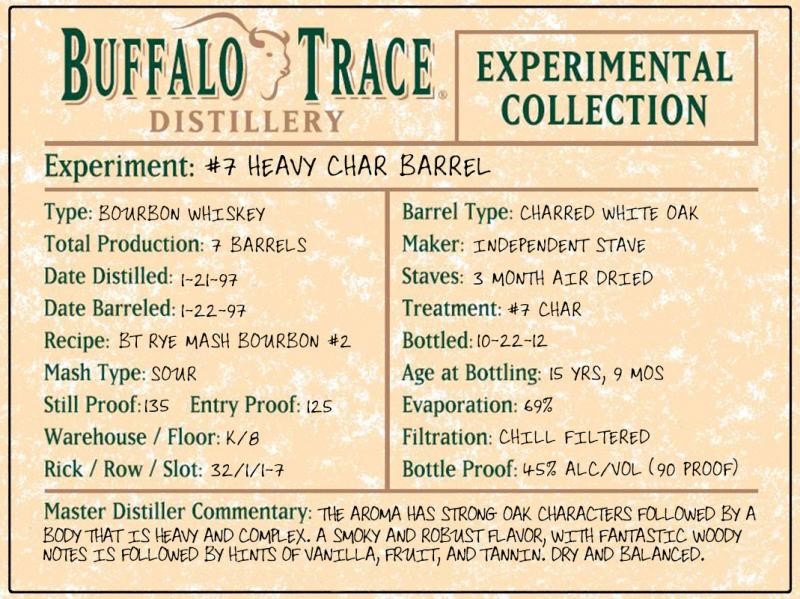 Is longer charring better, then? That very much depends on the flavor/taste profile you are seeking out. Think of charring as a kind of seasoning. Is more seasoning in your food better? That answer will also vary from person to person. Most companies, however, tend to prefer the higher char levels – and as you will read later, there are good reasons for that.

So far, so good. Let’s dig one step further.

There are basically four main reasons why whiskey benefits from barrel charring:

Deep-dive: How the liquid is interacting with the wood during the aging – and why the caramelized sugar matters.

When the sugar caramelizes as described above, it creates a so-called “red line” in the wood – just under the char itself. When the new whiskey is added to the barrels, it is typically done at (relatively) cool temperatures at the filling stations – and the barrels are filled to the top.

When the temperature rises during the summer months, the liquid expands and is therefore pressed into the wood. And the first thing it meets is the red line with the caramelized sugars. And when the liquid meets those sugars, it extracts a plethora of flavors – and the magic of aging is starting to happen. When the temperature gets colder, the liquid contracts – and those lovely wood sugar flavors are mixed with the rest of the whiskey. Over the seasons, this happens again and again – and many refer to this as “the whiskey is breathing”. Some manufacturer have implement climate control in the warehouses, so that they can introduce additional “heat cycles”, over and above the four natural seasons. It will allow the whiskey to breathe faster – and thus speed up the maturation process.

So … who would have thought: They probably started, back in the day, with charring barrels to remove odors from salted fish – and they ended up withdrawing the wood sugars closer the inner surface so that the whiskey became better. I freakin’ love nature.

And then just one more thing …

There is another “red line” in the wood, that is actually not a red line, but rather a “soak line”. Everybody gets them mixed up, so here’s the actual difference:

The “red line” is the caramelized layer of sugars just underneath the char – and barely visible. The “soak line” is how far the whiskey has penetrated the wood. As you can see from the picture below, it typically penetrates a few millimeters into the staves but goes much further on the sides, where the staves are joined together. This is not surprising, of course, as it is impossible to join the staves 100% together as if they were one. 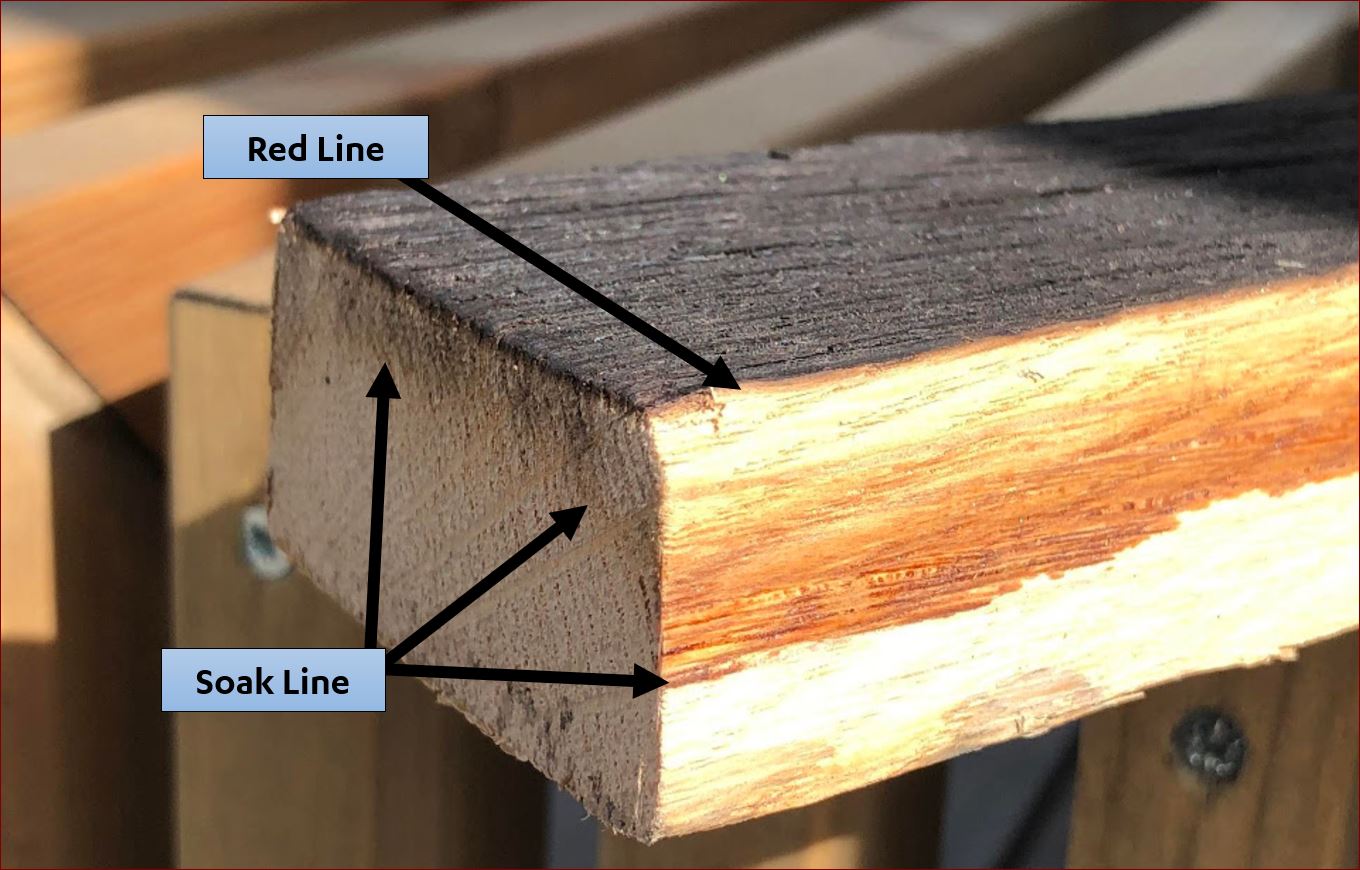 Hi Blake,
Very interesting information about char levels and,toasting. I visited Old Forester and spent some time with Campbell Brown and his VIP coordinator. Old Forester is rather unique in that they have their own cooperage on premises. The way they explained it,the toasting aspect(insertion of a toaster element inside the barrel) before charring,helped change the starch aspects of the wood to various sugars before the charring process which,I believe,was 3 or,3.5 but,don’t quote me on that! Anyone visiting Louisville would benefit from visiting the Old Forester Distillery. Keep up the imformative posts!
Thanks,
Scott

Good stuff !! If someone is REALLY into Bourbon, how can this info NOT be interesting…?!!

Thanks for the interesting and educational information. I look forward to your posts each week. Keep them coming!

The Independant Stave Company (ISC-Kentucky Cooperage) tour in Lebanon, KY (about 45min SE of Bardstown) was a fantastic enhancement to the distillery tours we took fall of 2017. It’s an interesting mix of automated and hands on manufacturing processes. I see they are revamping the tour right now, but we saw stations focused on building a new barrel, charring the barrels (awesome!) and re-coopering a damaged barrel. Well worth the drive!

Blake,
Can you contact me. I’d like to use your photos and come of your copy in a book on straight bourbons that I’m writing.
Thanks,
Roger