Skip to content
Blakein
Posts
July 17, 2018July 17, 2018
I know what you’re thinking. I’ve slipped and mixed up the most basic of bourbon facts. Pappy Van Winkle made wheated bourbon the most sought-after style of bourbon over the last 20 years. I don’t have to describe the levels of Pappy hysteria to the Bourbonr audience. But, what if I told you (insert 30 for 30 background music) the bourbon that put Pappy on the map was actually a rye bourbon.
In general, bourbon uses a corn, rye and barley mash bill. A bourbon mash bill has to be at least 51% corn but is usually in the 80% range. A wheated bourbon substitutes the rye for wheat. I use toast as a comparison. Wheat bread is sweeter and rounder than the spicy and peppery rye toast. Here is the Bourbonr Guide to Wheated Bourbon.
Julian Van Winkle took over the family business after his father passed away in 1981. They continued to buy inventory from Stitzel Weller and other distilleries. For more than a decade, Julian continued to do whatever he needed to do to keep the business alive. There was a slew of decanters and other “gimmicks” to entice sales. In 1994 Julian decided to release bourbon under a new brand named Pappy Van Winkle 20-Year. It came in a cognac-style bottle with the iconic picture of his grandfather smoking a cigar on the label. The big break for Van Winkle came in 1996. The 20-year received an unprecedented 99 points from Beverage Testing Institute (BTI).
The BTI win seems to be the tipping point for Pappy Van Winkle. Bourbon was on the rise. Pappy became one of the most sought-after spirits (not just bourbon) in the world. This is where it gets interesting. The bottle that received the 99 was actually a rye bourbon from Old Boone Distillery. You can distinguish this bottle by its green tint. There is also a Pappy Van Winkle 23-Year from with green glass and a gold wax top. It’s rumored to be a rye mash bill as well. But, Julian hasn’t revealed the source of this bottle.
For an interesting read, check out the archived thread from Straight Bourbon. 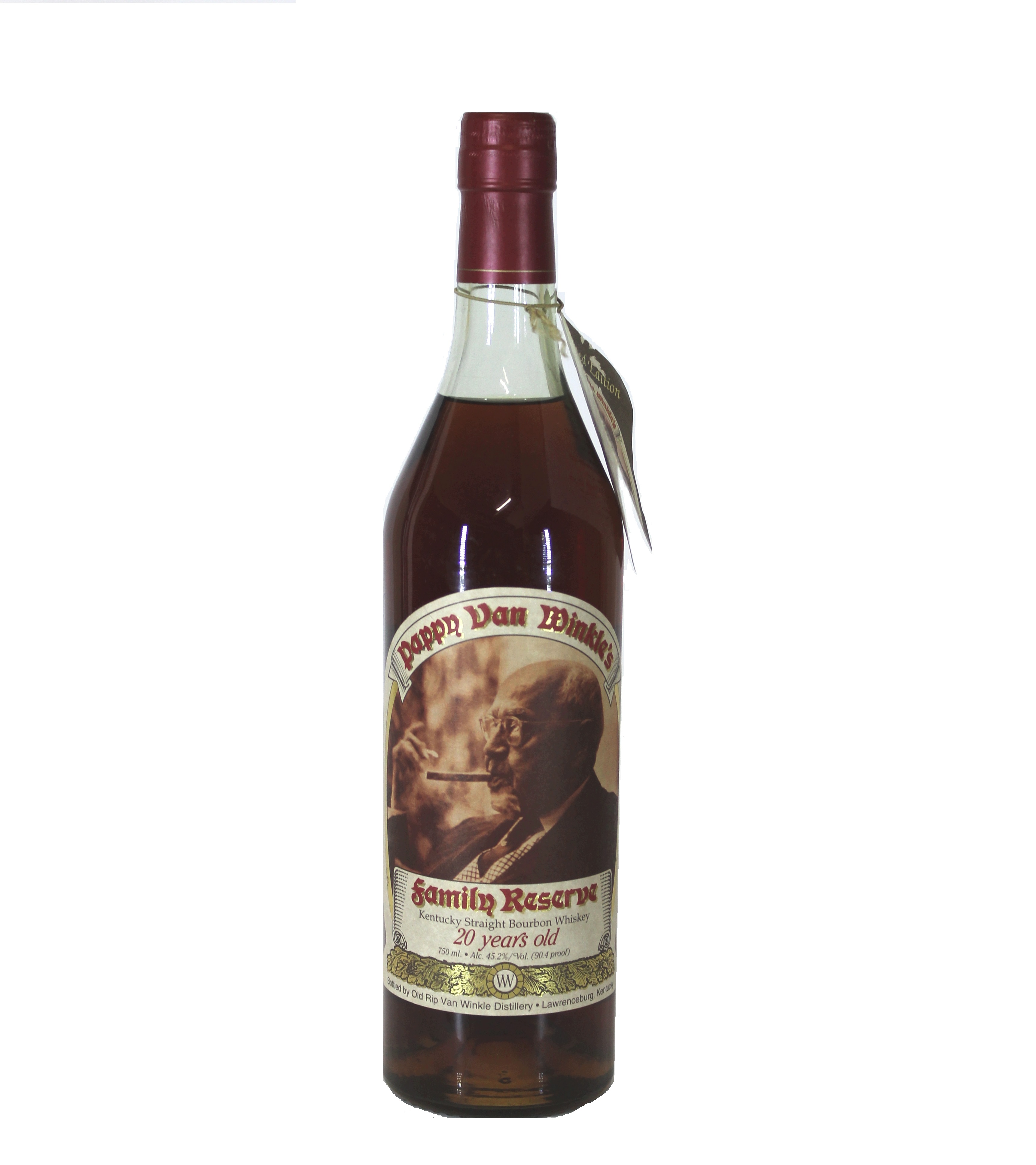 What does this matter? That’s actually a good point. It doesn’t. In an age where we fetishize bourbon and the Pappy Van Winkle brand, it’s an interesting caveat. Pappy Van Winkle 20-Year won several 99 points and a multitude of awards as a wheated bourbon too. It goes to show the talent of Julian Van Winkle as a blender. He doesn’t have to do much “selling” these days. Somehow we forget the decades before the hype and attention. He has created brands and blends since before the majority of the market knew what bourbon was.

Hi Blake, nice post. What are the chances of getting a bottle this year? It WON’T be resold by me, every year I try and hunt down a bottle for my uncle. He loves it and we drink it around Christmas.

NYC sells out almost instantly every year and then I see bottles on craiglists for 1000x markup. No thanks!

The odds are the same they’ve been, and will be for many years to come. Unless you are spending enough at a store that they will hold a bottle for you, or know someone well enough that they can set something aside for you, your best bet is a store that raffles bottles off their allocation. Otherwise, bite the bullet, save up during the year and buy secondary.
Barring any changes in distribution (which is very very closely held info) there won’t be much change in availability for quite a few years.

I remember seeing Pappy (with the grand dad and the cigar) in a liquor Store in Rochester MI called the Red Wagon. Small batch Jim Beam just came out and I was getting a bottle of Baker’s for Booker Noe to sign at a tasting he was going to be at in Detroit. I saw a price tag of $100 + and thought who the hell would pay that for bourbon….Lol! If I only knew then… Now I just paid $300 for a bottle of Stag…

So are bottles of SW juice worth and sought after more than BT juice? I would think so!

Regardless of the BTI results, Pappy exploded on the scene well after that when it was wheated and nobody even knew if it’s rye history. Obviously it all starts somewhere, and the 99 score obviously helped the brand get going in a big way, but this bourbon craze took off more than a decade after that.

I used to keep Old Rip Van Winkle as my house bourbon back in the 70’s because I liked it better than Makers and it was affordable — $17. I think it came from Anderson County but I’m not sure. Anyone know the early history?

What an honor to taste the revered Pappy Van Winkle. Rare to find a bottle rarer to find one open and willing to share it.
Thanks Bruce!

I’m new to creating my Bourbon collection. I seek all the advice I can get and love the back stories and reviews. The offerings in my area are limited. Thank you in advance for any pointers.

I’ve tried so many bourbons over the years, and while the Winkles are damned good, they are hardly the best. They hit a specific flavor profile but aren’t my cup of tea. At Retail? Sure I’ll buy. But that’s never happening again, and it’s not worth the hysterical pricing these days. Too much great stuff for far less.

Interesting to see a collection of Pappy behind the bar at Pete Dye golf Club in Bridgeport W. Va. single shot of the good stuff at $125.00. Did not expect to see it there at golf club.

I’ve still got a bottle of the original 23 year. Hard to find reviews or even background on it, since it came out 20 years ago, but what I’ve seen has been overwhelmingly positive. At some point, I’ll have to find out for myself.