You’ve probably come here to read a review of this years BTAC but allow me to take a quick detour. This is a statement/observation about whiskey reviews. Every bourbon cycle I read reviews about the current year’s limited edition whiskeys, and it’s always “98 points”, “outstanding!”, “fabulous,” etc. Can every limited release be a 95+? What’s the problem? Is it that the reviewers haven’t tasted enough 95+ bourbon to know what’s special compared to what is simply good bourbon? Does a free sample change someone’s opinion that much? Is it confirmation bias because we’ve paid $100+ for a bottle? 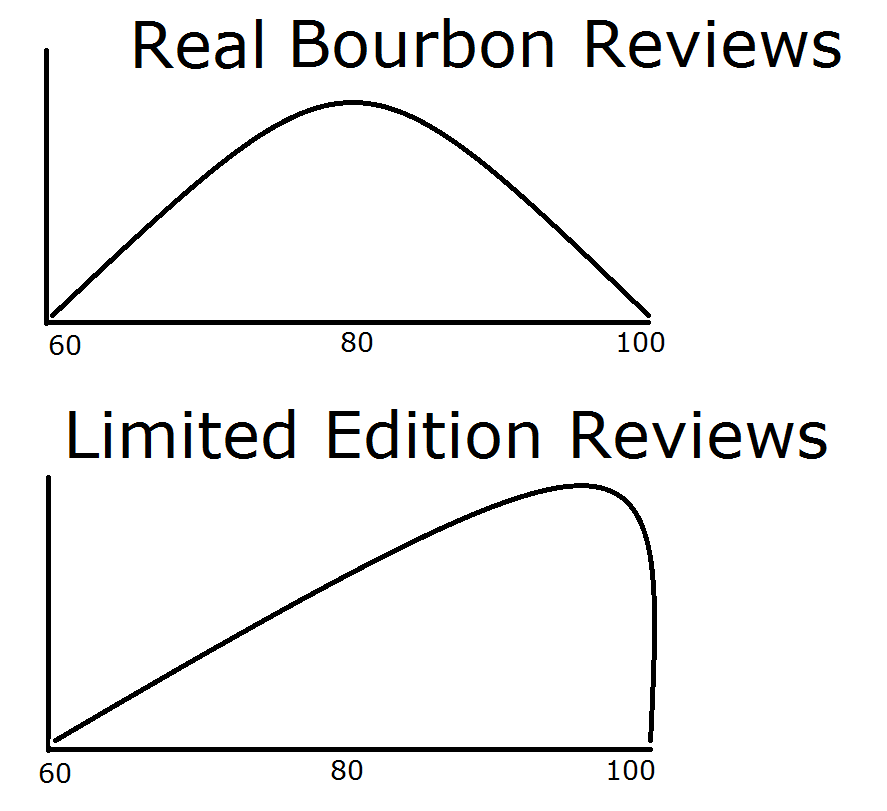 Most probably haven’t noticed, but I stopped adding a numeric value to my reviews. I try to be as straight forward as possible with my flavor notes and leave it up to you, the consumer, to decide whether or not to buy. Just because I like something doesn’t mean it’s worth your $100 but hopefully I can provide relevant information to your decision-making process. Now, on to the good stuff! 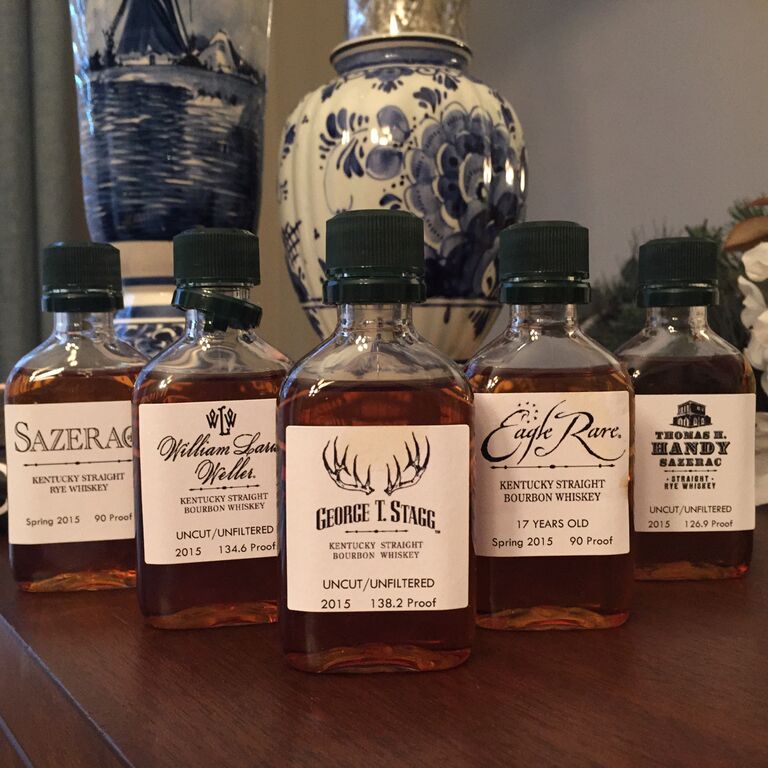 There’s a general sweetness with a woodiness to it. I get cherries but not necessarily dark cherry. It’s brighter like a fresh cherry or raspberry. It’s a consistent GTS flavor, and the taste is excellent. Carmel up front, but there’s a lot more going on (reminds me of mulled wine). It has some orange and hot notes on the taste and finish, but that’s expected at 138.2 proof. I tasted it next to the 2014 release. They’re very similar, but 2014 has a much better finish with more brown sugar and vanilla. I hate that there are so few bottles this year, but I was lucky enough to put a few of the 2014’s to hold me over.

The nose is honey and fruit. Like cantaloupe dipped in that cheap caramel sauce from Publix. There’s a little bit of vanilla but not much wood. The taste is excellent. It’s cinnamon, sweet tea with a nice creaminess. The finish is black tea and burnt sugar. It’s a little bitter, but the woodiness is great. The 2015 release takes the cake in this battle.

Woody and floral on the nose. There’s a leathery sweet tobacco smell. The first sip is wood and spice. Think spicy almonds because it’s not too sweet. It’s w clean taste and well balanced. I get an herbal tea finish. I’ve always thought that ER17 doesn’t get enough respect amongst the BTAC. It’s the Steve Kerr of the ’95 Bulls. However, this release is a little flat. Still good but seems muted compared to previous versions.

Big hit of fruit punch on the nose. There’s mint, vanilla and caramel, but the fruitiness is incredible. The taste is strawberry jam on butter toast and golden raisins. There’s surprisingly little oak until the end of the finish. Saz 18 is a whiskey you’d like to sit and smell for an hour. Delicious. Even after I finished the pour, the glass still smells like honey

The nose is sweet with a slight nail polish smell. It has an herbal fruitiness to it. It tastes like cooked apples and cinnamon. It has the honey and vanilla with the barrel proof burn on the finish that we all love but can come off a little hot at times.

There you have it. This is my take on the 2015 Buffalo Trace Antique Collection. While I don’t think anyone will pass on these bottles because of my review, it’s pretty hard to go wrong on any of these bottles. Any criticism I have is splitting hairs as they’re all well above average. How would I rank them? WLW, GTS (first time in a while this has been second for me), Saz 18, ER17=THH. Are they worth their secondary prices? That’s a discussion for another post 🙂

Great reviews (as always), and I applaud your candor about the reviewing process. As another reviewer who refuses to score his reviews, I appreciate that you’re letting the tasting notes speak for themselves.
With that out of the way, I’m *really* hoping to get my hands on a bottle each of WLW and GTS this year. I missed out entirely last year, and I want to rectify that. It’s a long shot, but I can keep hoping (and hunting)! And don’t worry, if I find any, I’ll be drinking it!

Awesome reviews, Blake. Looking forward for these to come to Charleston. I may stop putting numeric values on my bourbon reviews as well, there’s definitely some bias in the limited releases.

Have you noticed that you start the article saying limited bourbons get rated as though they are all toward the exceptional end of the scale, as though this represents a problem or an inaccuracy…
…then you finish your article with “Any criticism is splitting hairs as they’re all well above average?”
You’ve basically confirmed that the shifted curve is appropriate, haven’t you?

The top is in reference the LE’s as a whole. I do think the antique collection is deserving of good reviews however there’s a lot of “limited” or “special” bottles getting released that aren’t very good

If I’m lucky enough to find some again this year, I really dislike the decision making. Last year I chose GTS because I had to have GTS. I passed on Saz 18 in doing so. Then I found another bottle of GTS. Still haven’t had Saz 18. So decision time again, if I have the choice, grab the rarer than usual GTS, or pick up my first Saz 18 and risk no GTS this year.
At least I have faith I have the ability to make a choice 🙂
Thanks for the review, love the depth Blake.

Since you’ve never had the current Saz 18 (i.e., the Cream of Kentucky tanked stocks), then I would recommend selecting this year’s Saz 18 over the GTS. My reasoning is that 2015 will be the final year of the Cream of Kentucky version of Saz 18, and starting next year, Saz 18 will be Buffalo Trace’s own aged rye distillate. The tanked stocks of Cream of Kentucky will all be gone with this year’s release of Saz 18, so it will (likely) be your last chance to purchase the old/classic version of Saz 18. The BT version of Saz 18 next year may be just as good or better, but you never know. And if you want to taste what the “old” Saz 18 is like, get it now, while you still can. As they say, “when it’s gone, it’s gone”!

Lyndon, most people feel that Saz18 is some sort of blend of COK and Medley, which I would tend to agree with. The taste definitely falls somewhere between the two of them.

Although Stagg is always an excellent pour, some releases are better than others. I wasn’t too impressed with the last two Stagg releases. They are missing the hard hitting robust fire and char found in other expressions. Your review indicates that the ’15 Stagg is toned down a bit too. This year I think I’ll focus my efforts on getting the WLW. Thanks for the thorough reviews.

Blake, really appreciate the reviews. I’ve always been looking for someone to actually compare the new stuff to previous releases. I’m among the apparently small minority of people who was not impressed with any of the 2014 releases, especially the GTS. Really hoping that both that and the WLW are moving back in the “right” direction with this release.

I got the a saz 18 and a Thomas h handy yesterday. I know this will ruffle some feathers but I am a pretty new bourbon drinker and am starting to realize how lucky I was to find these. I opened the thh and had a taste and it was amazing, I have never had anything that tasted like this. I was really surprised at how floral it smelled, and was so smooth and delicious for 60% alcohol. It is really special, and if this is the “worst” of them then the i am officially on the hype train. I haven’t opened the saz 18 and I see it sells for 650$+ on the secondary market (craziness), selling it would break my heart but the entrepreneur in me has a hard time not considering ~800%+ profit.