While the release of a cask strength version of Maker’s 46 has been rumored for a couple of months now Maker’s Mark Distillery finally released Maker’s 46 Cask Strength a couple of weeks ago. While it was a distillery only release I was able to get my hands on a bottle thanks to the kindness of a fellow Bourbonr. Maker’s Mark 46, which was released back in 2011, is regular Maker’s Mark, but they add toasted French oak and allow it to age for an additional 2-3 months. The cask strength version comes in between 108-114 proof (mine is 108.9). 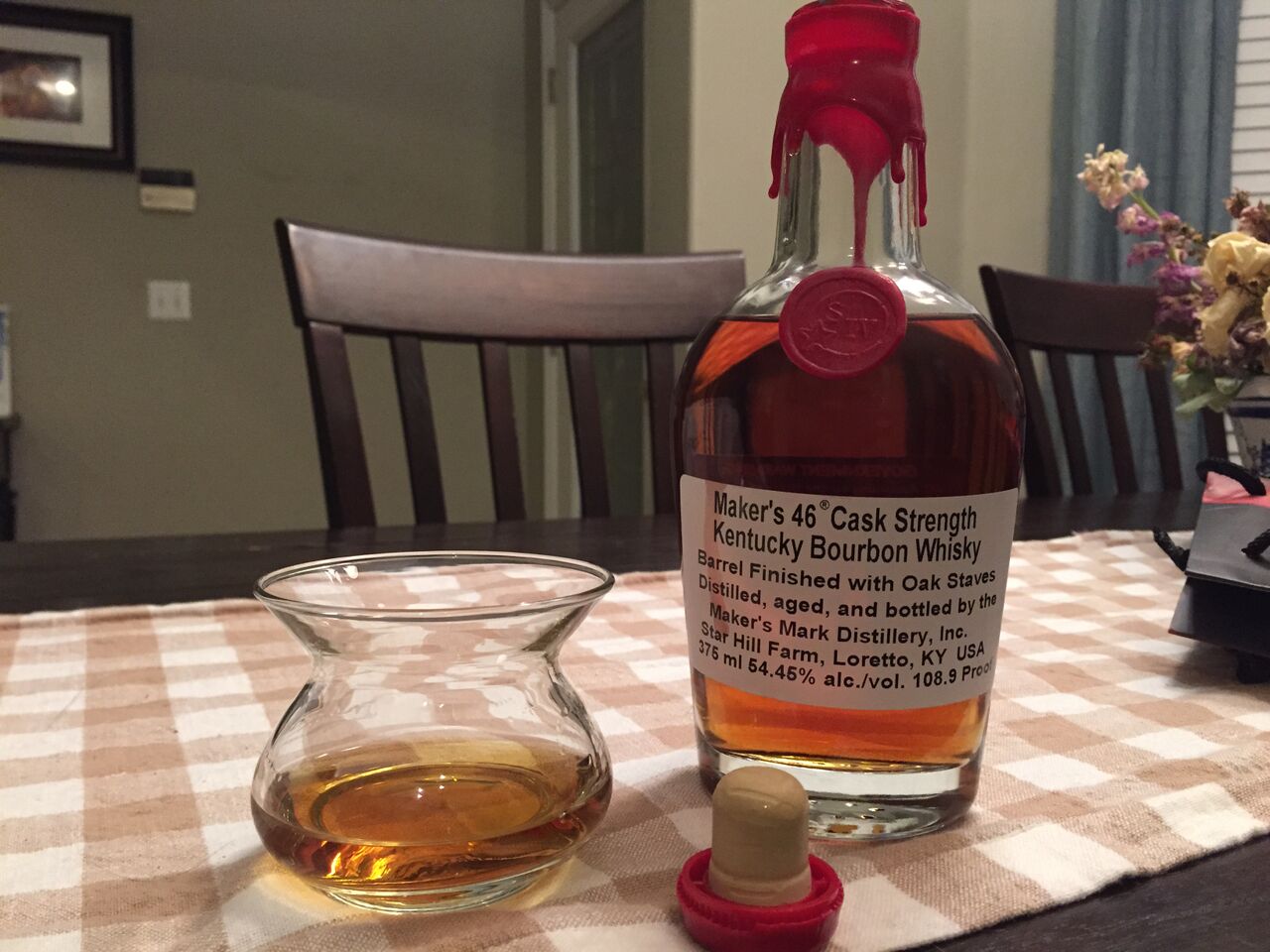 The first thing I notice about 46 is the bottle. The shape is a mini M46 bottle. It has the trademark MM red wax top with red wax seal. Then, there’s a label cluttered with text that looks like I printed it on an address label and slapped it on the bottle myself. The label on my bottle isn’t even straight. It is pretty funny that Maker’s Mark is selling the bottle like this. Take a look at M46. The bottle is beautifully designed with the label etched on the front and back. M46CS looks more like sample bottles I give out to friends. However, I’m not here to judge the bottle but rather the contents of the bottle.

The nose is sweet like toffee and or burnt sugar. There’s some dark fruit with a little bit of cinnamon. I’ve tasted this several times now, and the taste is nice but nothing that complex. It’s more burnt sugar from the nose with orange peel and baking spice. I was hoping for oak but it just barely shows up on the finish. M46CS is good but nothing to go crazy over. Spend $38 and get a 375 ml bottle when it shows up at retail. You’ll enjoy the pour, but I wouldn’t look to the secondary or pay anything more than retail

I missed the release by a few weeks with the timing of my visit and taking my daughter off to UK. HOWEVER I did pick up a bottle of Makers White. When you review that please don’t use all those fruity style wine references as those seem to me to take away from what real bourbon is about – manliness LOL. You might just describe it like it too has the smoothness of all Makers and this store bought shine is just some really good smooth shit! Isn’t that what shine is all about?!

So, we’re not allowed to describe what something tastes like or we’re in trouble of being less manly?

Reminds me of the guy who said I was a ‘bourbon snob’ for using juicy fruit gum to describe a flavor profile I found in one batch of Booker’s. Lol! There is no right or wrong when describing the many fine flavors found in bourbon — it is all subjective. A bourbon review however, is totally objective, and Blake is always spot-on with his reviews. BTW Blake , I wish you’d post your reviews on those ’15 BTAC samples that you have. Thx in advance.

Will the average person be able to purchase this item at a reasonable price?

unless you personally know a liquor store owner or nake a trip to the distilleries , you’re never going to be able to get a 750 ml bottle of Maker’s Cask Strength. You’ll have to settle for the 375 ml squatty-body.

That’s not true. They’re all over the place down here in FL

Incorrect. VA, DE and NJ have had the 750ml MMCS since April or so. Every liquor store I frequent has at least one on the shelf

Not true. I bought a 750ml of MMCS at the ABC store in Durham, NC and if you can get it off the shelf in NC, it just ain’t that hard to get.

Not true here in Texas either… we’ ve got them all over the place !!

That’s not true at all. purchased a 750ml MMCS last week in Atlanta.

This stuff is everywhere