At the end of 2014, Tuthiltown Distillery released their limited edition Double Charred Whiskey. It’s a mix of bourbon and rye, 92 proof, costs around $50, aged less than 4 years (apparently this label was approved before the TTB crackdown),  it’s a 375 ml bottle and was dumped from barrels that were saved from a distillery fire. 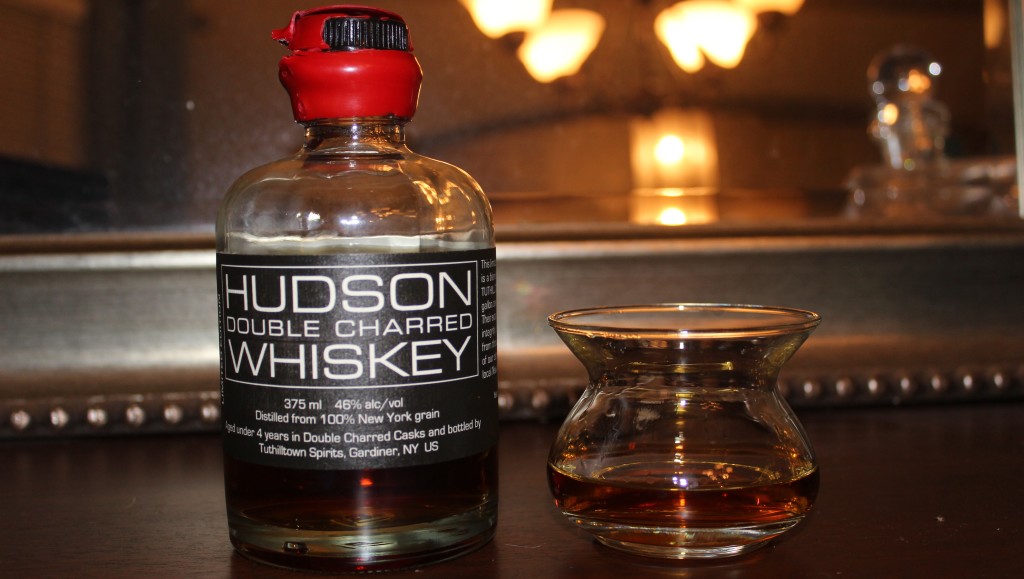 In the fall of 2012, a build-up of flammable vapors in the still room set off a backdraft that nearly caused the farm to go up in smoke. Thanks to the courageous and quick-thinking efforts of local fire fighters, not only was the distillery saved, but 100 freshly filled 10 gallon oak casks holding bourbon and rye now share a part of Tuthilltown’s history. Their charred exteriors yet untainted contents got Erenzo thinking, and eventually doing what he does best, innovating. On the two-year anniversary of the fire, the father-son distilling team of Erenzo and his son, Gable, released the limited edition Hudson Double Charred. A blend of bourbon and rye.

As with all bourbon and whiskey back stories, I tend to take them with a grain of salt. In this case it’s true. A good story only goes so far. Time to find out if the whiskey is any good.

Nose: A lot of cinnamon. Like a red hot candy mixed with some green wood. Smells young

Overall: I’m undecided on this one. I’ve never been a fan of Hudson Baby Bourbon because it was too young in my opinion and the small barrels just created an overly woody taste. However, this whiskey is different and I’m not sure if I really like it or if it’s just different. I’d say give it a try. While it falls short in some areas it’s interesting, tasty and for $50 is worth a shot.

A must for any Bourbon/Whiskey nerd …In my humble opinion 🙂

In compared to other bourbons it was not worth the price.

I am also on the fence with this one. Actually the second bourbon I’ve tried from Hudson, I am not totally wowed and not hating it either. Alittle water goes a long way with it.

$50 for a 375ml bottle? I haven’t tried this whiskey so it’s hard to say, but it doesn’t sound like it meets the requirements to be “worth a shot”. Sounds like the marketing folks are taking advantage of their unfortunate warehouse fire and making a good story out of it. Reminds me of E.H. Taylor’s Tornado Survivor.

Getting sick of these gimmicky bourbons…tornado surviving bourbons, bourbons that travel on the ocean, in a fire, etc. I am going to put a barrel on ski lift all winter, roll it down the hill, then send it back to the top and repeat 🙂

KYBourbonGuy, Please let me know when the Sky Lift Bourbon is ready!! Sounds like a great idea! Cold crisp air in winter, hot summer suns, snow, chair lift movement. YOU GOT SOMETHING THERE!!

lol While I agree there are a lot of weird gimmicks out there in the bourbon world, they sometimes work. I was convinced last year to try a bottle of Jefferson’s Ocean Aged #3 by the liquor buyer and also the owner of the local store, who both highly praised the bottling. I opened it for visiting family and the “gimmick” worked for everyone. A balanced, smooth combination of wood and flavors (I won’t bore you with my subjective “tasting notes”). After that positive experience, it put me in the camp of it being historical/retro, rather than gimmicky, since floating barrels on ships/barges for months was actually how bourbon was treated in its early days. Hey… maybe I just fell for the gimmick, but I was pleasantly surprised.

Jefferson’s Ocean probably gets more hate than it should. Release #2 was good but pushing the price limit at $50. I thought #3 was also too good but just too expensive. I’ve slipped them in to a couple blind tastings and they’re just OK.

I found a couple of bottles of the Double Charred recently and was pleasantly surprised. I will start by saying I am a fan of Hudson. The Four Grain is my Favorite and then probably the Rye. They are a lot of $ for the small bottle – but they are very unique in the category and go down nicely. The Double Char did not disappoint. Much like the other Hudsons, it provided some nice complexity and a very unique last profile without being overly harsh. Just my 2 cents. Also, this was not a marketing gimmick. There truly was a fire. While they might be romanticizing the story – it is real.