If you’re a bourbon drinker you probably remember Wild Turkey from your days of mixing their 101 bourbon with coke. While they continue to pump out some great/available bourbons (Rare Breed is usually my favorite) Wild Turkey has a long tradition of limited edition bourbons. Wild Turkey Diamond was released in 2014  to mixed reviews and can still be found on a lot of store shelves but I was really excited when I heard they were releasing a 17 year barrel proof bourbon. 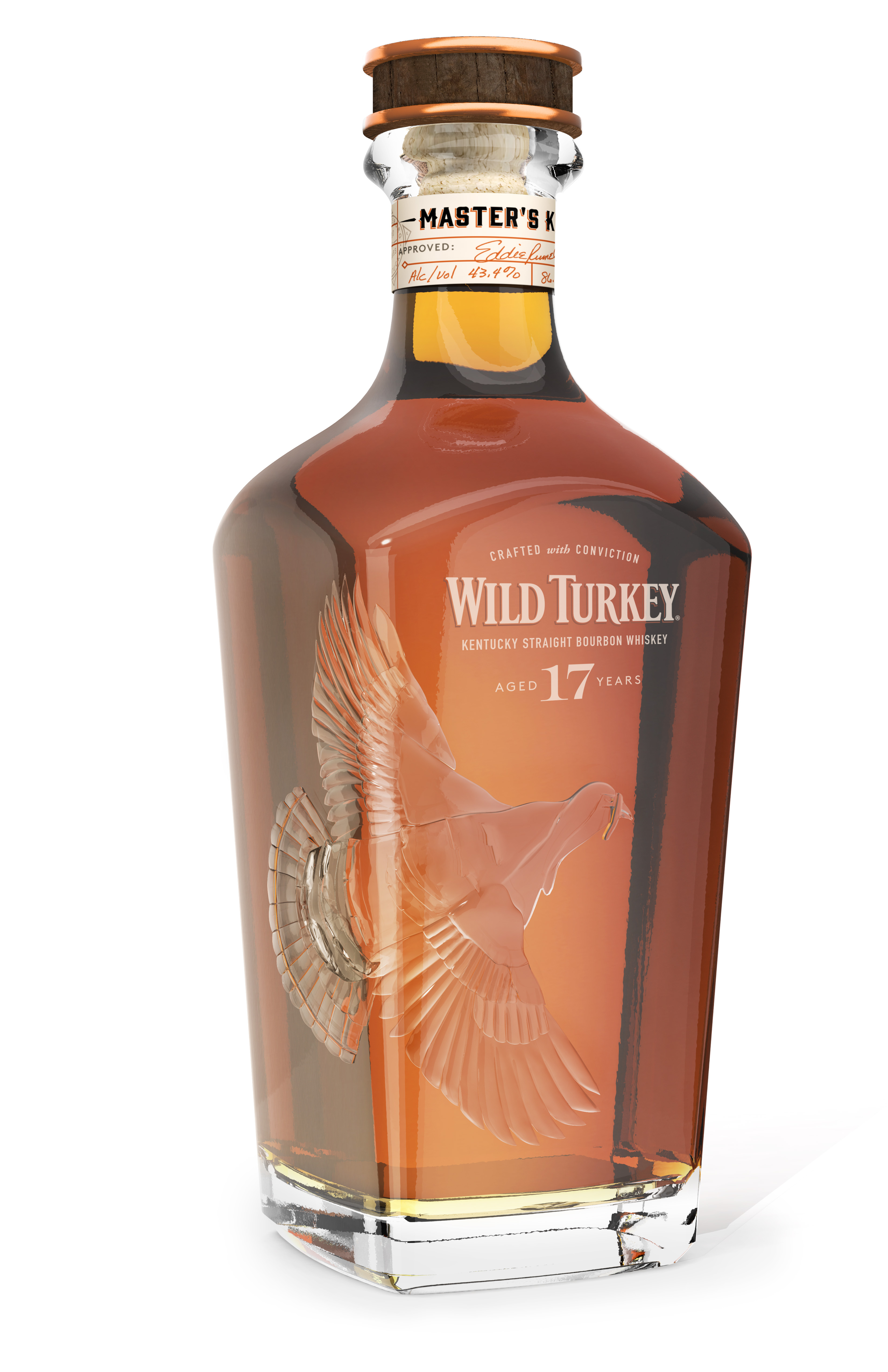 The story behind Master’s Keep is even more interesting. In 1997, Wild Turkey was running out of space in their warehouse so they transferred the barrels to  stone warehouse at the old Stone Castle Distillery. Due to some water damage the barrels were moved to a different stone warehouse on the property. Finally, the barrels were moved back to the Wild Turkey distillery in 2010. Cool story but why does any of this matter? You’ll notice the proof of Master’s Keep is 86.8. That’s because of the aging environment. Stone warehouses have far less temperature swings and as a result affect the finished product. 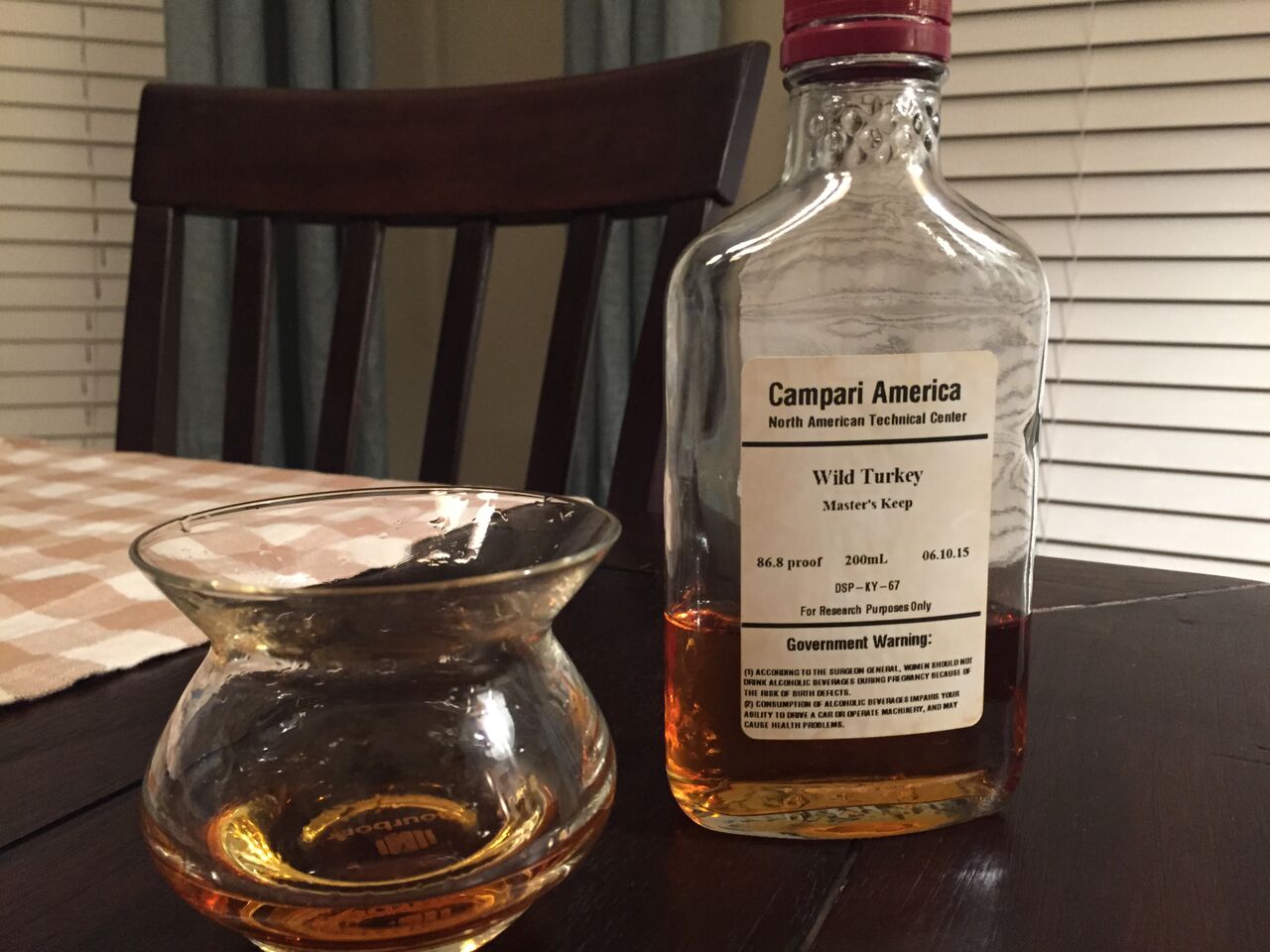 Coconut, orange peel and a sweet wood. Spicy with ground cinnamon or some kind of savory spice. There’s an interesting sweet and herbal taste. Kind of like sweet tea. Overall, it’s woody there’s no doubt about that but I’m not sure what else to expect from a 17 year old bourbon. The oak is powerful at times but in a really enjoyable way.  The fact that it’s an 86.6 barrel proof makes it one of the more interesting pours I’ve had this year.

Conclusion:It’s an interesting pour. Probably the most interesting thing I’ve tasted in 2015. The low proof barrel proof really plays tricks on the palate. I’ll definitely be grabbing a bottle even though I passed on Wild Turkey Diamond. Even at $150 I don’t see Master’s Keep being on shelves for very long.

When does Master Keep release to the public or when will it be available at the gift shop for the distillery tour? What date in August?

I was hoping to see Wild Turkey turn it around on special releases after the WT Diamond. I’m not sure they understand who they are. Wild Turkey has spent years trying to be a working man’s bourbon. Look at some of the tv ads for WT 101 over the years. The price point is a problem. I could care less if this is the new bourbon market. If BT can suggest a reasonable msrp for BTAC’s at $80 why in the hell is Master’s Keep at $150. It’s Wild Turkey a brand most associate with good quality at reasonable prices. Thanks for alienating your fans that pay the bills day in and day out.

Wild Turkey just doesn’t seem to get it or how to do a limited release. This isn’t what brings all the bourbon nerds out to praise you. Creative, complex and somewhat reasonably priced bourbons do that.

Couldn’t agree more! Sounds more like an “Orphan” Turkey that couldn’t couldn’t make the cut anywhere else for 17yrs than anything else. $150 for low proof Wild Turkey with lipstick?! Huge passssss! Willing to bet this will be saddled up next to all of the Diamond anniversaries that are still gathering dust as we speak. The fact that in theory for $10 more I could have a Stagg and WLW is mind boggling. Just because you’ve been making mediocre whiskey for 60 years doesn’t mean you can command a hefty ransom for whatever barrels you have lying around the warehouse that you deem “limited”. Stick to the middle shelf and leave the limited releases for the quality producers.

I was also fortunate enough to sample this a few weeks ago in Kentucky. I loved it! I found it to be viscous, lots of caramel and spice goodness, and a solid sip from entry to finish. I think our chances of finding a bottle of this are pretty slim & I saw elsewhere that it would be retailing for more like $250.

Thanks for the review! I’m intrigued by this one, but I’m not yet sure about picking it up when it hits shelves near me. Is it an “interesting” that you’d want to go back to with relative frequency?

I had a taste of it at the Bourbon Affair. It was really good. Eddie Russell said that there wasn’t many bottles being released, I hope that I can get one.

Nice bottle in any case!

Was this a free sample from Campari? Were there any conditions from them for this review?

Yes free sample. No conditions on the samples and I’m sure they don’t even read my post. I take samples when I can’t buy something in a reasonable amount of time. Florida tends to get everything late so I probably won’t see a bottle for another 2-3 months and by then everyone has already decided whether or not to buy

Thanks for the review. Sounds like it might be worth a try at a bar, but not worth chasing down a bottle that’s goin’ to run me 150+. Looks like the marketing dept. at Campari did a nice job creating a good deal of hype surrounding this release. There’s the story — everyone loves a good story — about the traveling barrels. Then comes the hook about a unique low barrel proof that ties in with the story. Finally bundle all of that together with the high age statement, plenty of pre release samples sent to popular bloggers and some mumbling from Jimmy Russell about llimited number of bottles and you have an instant $150+ bottle that everyone has to have regardless of taste or quality.

Water damage….low alc….hmmmm. It doesn’t take Sherlock to figure out how the barrel proof was magically so low on this. They’re bottling their flood damaged (likely almost destroyed) stock and branding it as high end, unique stuff. MEGA pass on this.

I ended up buying a bottle at LB since they had plenty available for $159.99. It’s a very smooth yet average pour with an oily, dull, flat, cloying sweet and Spicy taste. Kinda reminds me of a cross between Bulleitt and Four Roses. For $160 it’s a total rip off–hell it would still be a rip off at $60. I’ve learned to stand clear of these heavily hyped story bourbons that come in grandiose packaging and carry ridiculously high prices, but the 17yr age statement hooked me on this one. With 36K bottles produced my guess is that this will be another dust collector along side Diamond.

Please post any proof you have of the statement you’ve made here!
I’m no Wild Turkey fan boy …but words are cheap!!
I find your assertions here… that they are selling “damaged Bourbon” (your word)…e pecially so!!

Nice review. What do you do with your empty sample bottle. Would love to get my hands on one. Full or empty for the collection. Willing to pay. Contact me if interested.

I’m attempting to purchase a Wild Turkey Masters Keep 1894 but nobody will sale me one because I live in the USA. How can I possibly make my purchase happen? Is there anybody out there that will sale me one or help me to get one ? Thanks to anyone that can help me aquire one, as I’m a collector. Whatever it takes
David Goodman
normsgts@comcast.net
318-470-5078

I’m trying to purchase a Wild Turkey Masters Keep 1894, which is for Australia and I live in the USA. Well, nobody is willing to sell me one, claiming customs problem. I would be willing to purchase an empty decanter of this item w/box as I only want the decanter & box to complete my collection. That should overcome the customs problem. I would need it to be in like new condition, though. Could be profitable for someone.
Thanks for anybody willing to help me,
David Goodman
normsgts@comcast.net