Whether you’re new to bourbon or a veteran of the game you’ve heard the name Stitzel-Weller. In (almost) mythical bourbon discussions the Stitzel-Weller name fly’s free.  The same question pops up when discussing older bottles Pappy Van Winkle, Old Fitzgerald, Weller, Rebel Yell, etc. “Is it Stitzel-Weller?”. Stitzel-Weller became famous for their wheated bourbon recipe and produced some legendary bottles. Even even 20+ years after the distillery shut down it’s still some of the most sought after bourbon.

The Stitzel-Weller determination is like a murder built on circumstantial evidence and not a case with a smoking gun. Below is a list of all the Stitzel-Weller brands. There are many variations to some of these brands but this is the four.

The history and timeline can be a little confusing but here are the highlights:

1908 – Julian “Pappy” Van Winkle and Alex Farnsley acquirer a controlling interest in their employer WL Weller and Sons. Now WL Weller and Sons was just a bottler and buying most of their whiskey from Stitzel.

1933 – Stitzel joins forces with Weller and Sons to create Stitzel-Weller. They begin construction on a distillery in Shively, Ky the next year.

1972 – The Van Winkles sell their ownership and begin sourcing the bourbon for their own brand.

There’s gaps in this timeline but for the purpose of this article we only want to know whether a bourbon was made by Stitzel-Weller. You should read Mike Veach’s full timeline to get a more detailed account of the history.

Is your bottle from one of these brands and was distilled, barreled or bottled during before 1992? Check the bottom on the bottle for a number. This is a decent indicator of age. Tax stamps are a better indicator but you’ll only find these on bottles that are pre-1985.

Is your bottle marked “Distilled at DSP-KY16 in Louisville, KY“? DSP or Distilled Spirit Plant is a unique code given to each distillery and KY-16 was Stitzel-Wellers. Remeber SW isn’t (wasn’t) the only distillery in Louisville. Their Old Fitzgerald brands transferred to fellow Louisville resident Heaven Hill.

Is the UPC code 88508? This is tricky because some of the SW UPC labels went with the Old Fitzgerald brand to Heaven Hill and doesn’t always confirm that your bottle is Stitzel-Weller.

Remember, these are clues. I’ve heard of distilleries using old labels after acquiring Stitzel-Weller brands. WhiskeyID is another great resource for determining the source of your bottle.

According to Julian Van Winkle Stitzel-Weller was making bourbon for him from 1982 until they closed in 1992. That’s 10 years of stock. The Van Winkles took most of these barrels with them to Buffalo Trace when they partnered up in 2002. These barrels moved to the BT warehouses, got bottled or put in stainless steel drums to prevent further aging. This is where things get a little confusing. The obvious answer for when Pappy Van Winkle stopped using SW would be to back the age statements to 1992 but there have been some differing reports. This is the years I’ve always believe to be the cut off: 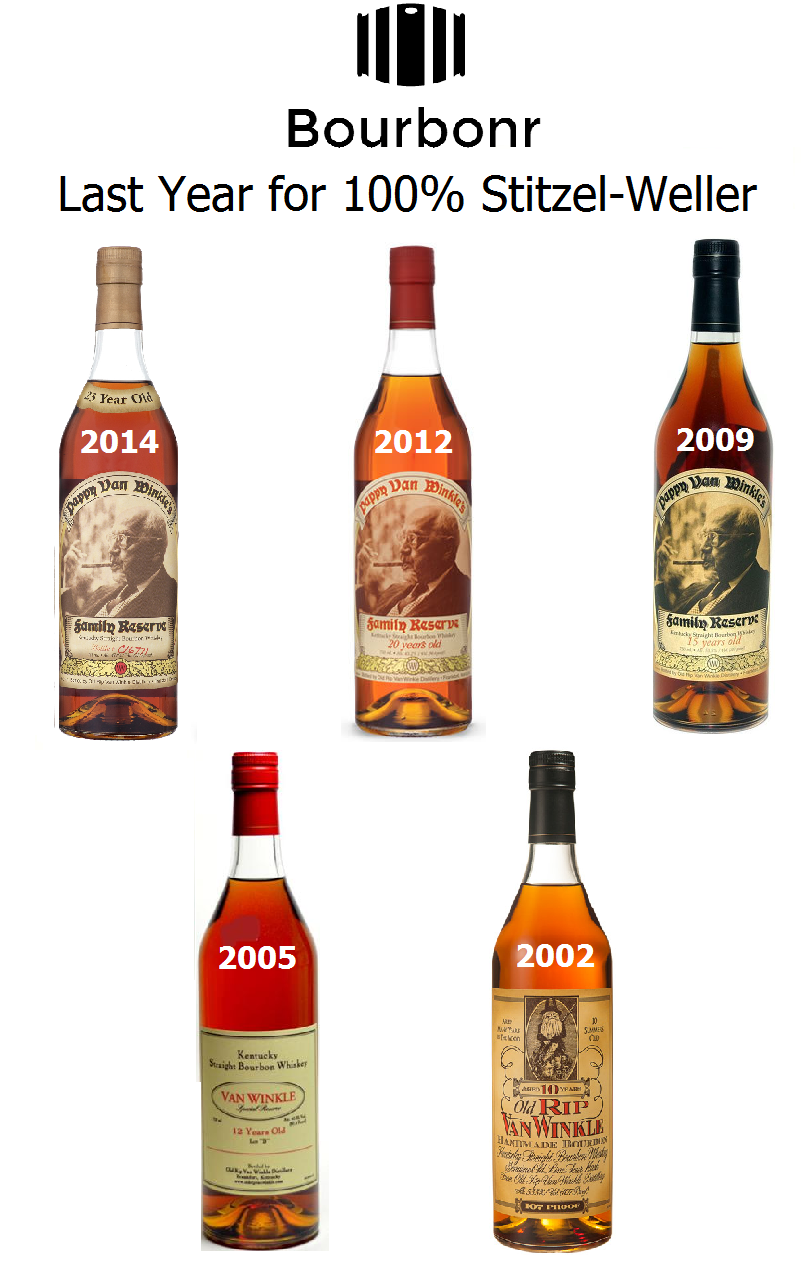 Sku’s interview with Preston Van Winkle lends a little more credibility to these ages. I decided to reach out to Preston as well to see if he could shed some more light. Below is the response I received:

It’s not as cut and dry as that as there are some Bernheim barrels in there as well. On top of that there was a year in the early 90s before S-W shut down for good that their still was down and coincidentally BT did some contract production for them. The below [chart above] is fairly accurate as to when the last possible bottling of 100% SW was done with the exception of the 23. I believe what we have bottled this year for the 2015 allocation is at the very least mostly SW as the the spring of ’92 was the last distilling season at SW.

Prestons comments peak my curiosity even more about when the Bernheim barrels were used. My guess is he’s referring to ORVW 10 and 12 (Lot B). Good news is the 2015 Pappy Van Winkle 23 will be all or a majority Stitzel-Weller. Buffalo Trace acquired the Weller brands in 1999. It’s probable that more SW stock came with it to add the the Van Winkles SW stock. Confused? So is everyone else. The fact is no one knows (or is saying) exactly what went in to each bottling. Until a few years ago no one cared. Yet, this is the age of information and Bourbonr’s care about this kind of stuff now.

Michter’s 10 bourbon with a 7k-10H batch code – These aren’t officially confirmed but I’ve been told from some pretty reliable sources that they are.

Jefferson’s Presidential Select 17 & 18 – I only say rumored on these because of Trey Zoeller’s comments about blending a rye bourbon in to the later batches of JPS 18. I’ve never heard a definitive cut off for which batches were blended as opposed to all Stitzel-Weller bourbon.

John E. Fitzgerald Very Special Reserve – This was distilled at Stitzel-Weller and some how ended up at Heaven Hill. It will be released this fall. Most likely at the gift shop with a price tag north of $250 for a 375ml bottle.

There are some bottles that we will never know for sure whether they’re Stitzel-Weller. As much as I enjoy finding answers the uncertainty adds to the myth and legend of Stitzel-Weller.

Fascinating bit of detective work, Blake! Thanks for putting this together. Figuring out the lineage of some of these bottles certainly seems like a daunting and confusing task, but I suppose you could argue that it adds to the “mystique.” Personally though, I’m more concerned about how a bourbon tastes than whether or not it’s “100% Authentic Stitzel-Weller Juice.”

Very cool and informative piece and it all seems to line up with most everything that I’ve beeen able to suss out from various places– thanx for putting it all into one tight piece that exists now as record.

We were cleaning out the cellar and found 12 bottles of this bourbon. The copyright says 1956, and the seal has the numbers 496610427. They’re all still sealed. The find of a life time thanx

Hi Tom – do you mind shooting me an email at Blake@bourbonr.com

Heaven Hill is in Bardstown.

Heaven Hill owns and operates the Bernheim distillery in Louisville. That’s why you see “Louisville” on a lot of HH bottles

Another great post! Other than branding, history and linneage, what is the actual significance of SW juice? Beyond “status” and market price….why the hype?

More than any other market principle, scarcity drives demand when it comes to high-end spirits. In turn, demand drives up costs, often regardless of quality or actual taste.

I’m not saying that Stitzel-Weller juice isn’t good, but the fact that many experts aren’t even sure where the cutoff is suggests they can’t tell simply by tasting it. I’m also not saying Van Winkle products aren’t great, but there are tremendous bottles sitting on the shelf for under $30 (Old Weller Antique, to name one) which can give even the more elusive bourbons a run for their money.

Never forget the golden rule of marketing: “The easiest way to make someone want something is to tell them they can’t have it!”

Hey Blake,
What about the laser codes? If , say, one of my ORVW’s shows a bottling year of 2009, and it’s a 10 year old whiskey, the earliest it could have been distilled would have been 1989, predating Buffalo Trace. Not all whiskies from my experience have a DSP number and none of my Van Winkles’ do.

If you have a 2009 ORVW 10, then it was distilled no later than 1999. BT bought Weller that year, and started making wheated bourbon for that brand. So it is from BT and/or (new) Bernheim. The usefulness of DSPs is limited to bottled in bond bottles, which in this case would be limited to the original SW brands.

Reply
Pingback: The Old Crow and the Cabin Still (not to be confused with Hemingway) | It's just the booze dancing...

Here is the link to the you tube video for you to view: https://www.youtube.com/watch?v=wyPVmNhTkxg
Re: the SW vintage bottles, I currently have.
Thanks,
Jetskili

Reply
Pingback: The Old Crow and the Cabin Still (not to be confused with Hemingway) | It's just the booze dancing…

It doesn’t matter who distills the stuff, it’s the mash bill that tells the tale. Saying something was distilled at Stitzel-Weller doesn’t automatically make it a Van Winkle bourbon. After the Van Winkles sold Stitzel-Weller Cabin Still, for example, went from a decent lower priced bourbon to all but undrinkable.

While I agree that the new owners dropped the quality they didn’t use Canadian Whiskey and there’s no such thing as Canadian bourbon. Here’s a good read about the brand http://www.cooperedtot.com/2014/04/the-tragedy-of-old-cabin-still.html

Despite the name, Canada Dry was a American Bourbon Brand, not a Canadian Whisky.

Blake, the link you provided mentioned the Canada Dry bourbon, which was the brand name,.
As an aside, there is Canadian bourbon, made before 1964.

I noticed you mentioned “K&L’s Willett Pick – 21 year, #9948”. Are you basing that off K&L’s claim that it is Stitzel-Weller Bourbon? Has it been confirmed? Back in 2012, when Willett first opened its doors, no one really cared THAT much about the brand, which is why I ask.

Reply
Pingback: What Happens When Your Favorite Bourbon Brand Gets A New Owner? - Chicago Bourbon

I have a 20 year PVW with no UPC code on it. Has the same photo and story when “Pappy completes a round”

Guess to age? No laser code either.

Reply
Pingback: There is no Pappy in Pappy – Distilled Sunshine

We have a Very Very Old Fitzgerald DSP Ky 16 unopened 90 proof.. Looking for a value?? Please…

Yes, it would be. Bottled and distilled in Lousiville?

Need help a have a stitzel-weller barrel serial number a19915 filled 11/04/1967 trying to find a little history on it,do you know where I could find it thanks terry

I have the opportunity to buy at an estate auction an unopened bottle of Rebel Yell that was originally purchased in 1967. The bottle looks to be in great shape. Any idea on its value.