An analytic review of the BTAC barrel proof releases

Every fall since 2002 Buffalo Trace has released their Antique Collection. While the Antique Collection has evolved over the years there are three staple barrel proof whiskies (2 bourbons and 1 rye) in the collection: George T. Stagg, William LaRue Weller and Thomas H. Handy. Every year these three whiskies are crafted by selecting barrels from three of my favorite Buffalo Trace mash bills (mash bill #1, wheated mash bill and the rye mash bill).

While most would be happy to drink and enjoy these fine whiskies the accountant in me came out so I decided to whip out an excel spreadsheet. The antique collection began in 2001 but George T. Stagg was not released until 2002 along with Eagle Rare 17, Sazerac 18 and Weller 19 (no longer released, these barrels were most likely siphoned to Pappy Van Winkle and later WLW). It wasn’t until 2005 that Buffalo Trace introduced William LaRue Weller with Thomas H. Handy following the next year. By 2006 we had the current line up for the Buffalo Trace Antique Collection:  Eagle Rare 17, Sazerac 18 (the first two are age stated and 90 proof so not much to analyze there), William LaRue Weller, George T. Stagg and Thomas H. Handy.

BTAC Barrel Proofs by the numbers: 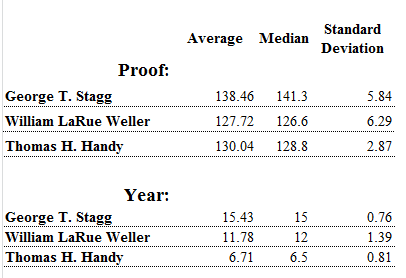 There is a lot of interesting details on the graph below. Notice that while the proof has remained fairly consistent in Thomas H. Handy there are some pretty big swings in both George T. Stagg and William LaRue Weller. This is most likely because Buffalo Trace is going after a specific taste rather than just bottling on a predetermined date. Also, 2013 was the first year George T. Stagg wasn’t the highest proof in the release. While I really enjoyed the lower proof of this years release this is something I think will change for the 2014 release.

What things do you find interesting in these numbers? Let me know in the comments section. 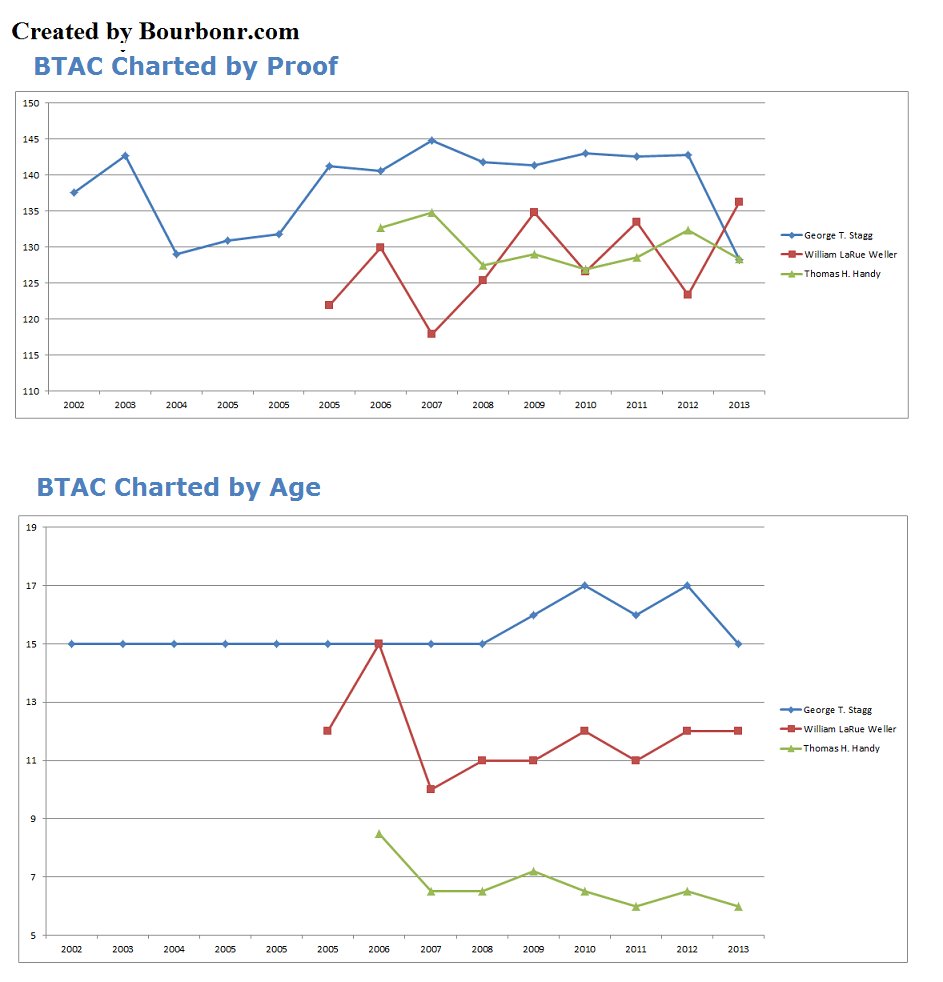 Final thought: How great would it be to add a barrel proof release from mash bill #2! Maybe a Blanton’s (US release) or Elmer T. Lee BP? Just a thought

Both Elmer T Lee and antique Ancient Age are no longer readily available. I suspect a well aged, but new product line from mashbill#2 is in the works from BT

I’ve noticed a shortage on shelves for Elmer T Lee but still seeing plenty of ancient age. I’m sure there is a shortage across the board. Would love to see at new older mashbill #2.

Also, found this very interesting:
“Buffalo Trace Mash Bill #2: Ancient Age, Elmer T. Lee, Rock Hill Farms, Hancock Reserve, Blantons.
Those bourbons are made under contract by Buffalo Trace Distillery, owned by Sazerac company, for Age International, a Japanese company.
Chuck Cowdery giving his take: “Sazerac can make suggestions to Age but that’s about it. Age controls all of the brands that use that mash bill. Obviously, these are deals between two closely held corporations, so I don’t know the exact arrangements, but I assume that Age actually owns all of the whiskey made from that mash bill from the moment it’s distilled. It’s essentially a contract distilling job. Bottom line is Sazerac has nothing to do with it. It’s 100% up to Age.”
Read more here: http://www.straightbourbon.com/forums/archive/index.php/t-17271.html“

Shocked Handy is a 6 year old Rye. Does it come from normal Sazerac mash? Will it age to Saz 18?

In a way yes. Sazerac 18 is not currently a BT mash bill but as soon they have it aging and it should be ready in a few years. This may help as well: http://bourbonr.com/blog/buffalo-trace-distillery-bourbon-mash-bills/