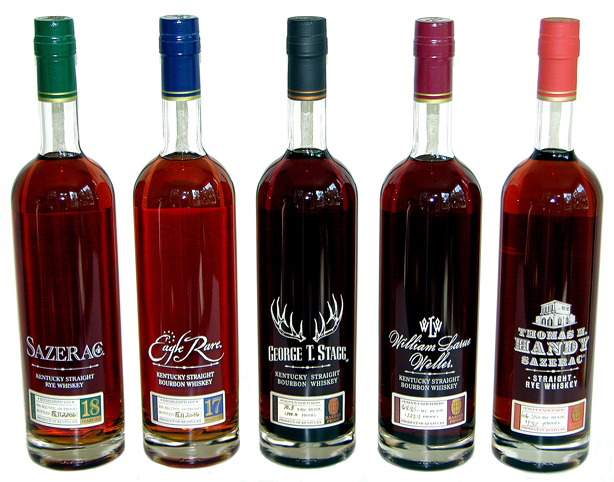 Eagle Rare 17 Year Old
The previous edition of this bourbon was honored with a Gold Medal at the 2012 International Wine and Spirits Competition. The 2013 edition was distilled in the Spring of 1993 and has been aging on the 2nd, 3rd and 6th floors of Warehouses I and K. The barrels selected for this batch were actually aged for 19 years, and the taste has been described as dry, with hints of oak, leather, and tobacco.

George T. Stagg
The 2012 release of this perennial favorite was named the “World’s Best North American Whiskey” at the 2013 World Whiskies Awards. The 2013 George T. Stagg was found in Warehouses I, K and Q. This uncut, unfiltered bourbon was distilled back in the spring of 1997 and weighs in at 128.2 proof, not as strong as some years, due to the location of the barrels on lower floors. “We sample many barrels throughout the year to find the best ones to create George T. Stagg. It just so happens this year, most of the barrels had been stored on lower floors. The temperature remains cooler down low where it balances the mature flavors from the wood and in turn the proof climbs slowly from the entry proof. The quintessential George T. Stagg taste is there – a big, bold whiskey that is easy to sip,” said Harlen Wheatley, master distiller. Although still highly allocated, Buffalo Trace did begin to start putting more barrels away back in 1997 for future George T. Stagg releases. This whiskey tastes of fudge, vanilla, and tobacco.

Thomas H. Handy Sazerac Rye
Thomas H. Handy Sazerac Rye is an uncut and unfiltered straight rye whiskey. The 2012 edition was named “World Whisky of the Year” in Jim Murray’s 2013 Whisky Bible. This year’s Handy was distilled in the spring of 2007, aged on the seventh floor of Warehouse K and weighs in at 128.4 proof. The flavor has been described as toffee, clove, and allspice.

William Larue Weller
William Larue Weller is the Antique Collection’s uncut, unfiltered, wheated recipe bourbon. The previous edition was named the “Second Finest Whisky in the World” in Jim Murray’s 2013 Whisky Bible. The 2013 offering was distilled in the spring of 2001 and aged on the third and fourth floors of Warehouses M and P. This William Larue Weller release registers in at 136.2 proof. It tastes of dates, caramel, and brown sugar.

The Antique Collection was introduced more than a decade ago and has become a cult favorite among whiskey connoisseurs. Since 2000 these whiskeys have garnered numerous awards from such notable publications as Whisky Advocate Magazine, Spirit Journal and Jim Murray’s Whisky Bible.

The 2013 Antique Collection whiskeys will be available in limited quantities starting in late September or early October. Suggested retail price is $70 each.

Today my virginality is broken.
I tasted the first Buffalo Trace and it was an exciting happening.
I like to do it again !

It’s only the beginning!