Sourced products are one of the most controversial topics in bourbon. Mainly because some brands choose to use deceptive tactics. This is the story of how it all works.

I’ve mentioned it before, but I worked with Manifest Distilling in the Winter of 2016 to source a 10-year product. This story really starts close to three years ago when I met a local whiskey enthusiast via Bourbonr, Scott Kennelly. Long story short, he became one of the founding members of Manifest Distilling and introduced me to another founder and Head Distiller David Cohen. Like drinking buddies do, we often discussed what we liked and didn’t like about the industry and what products we’d like to try.  As Manifest planned their distillery opening, the option to source a product kept coming up. Craft distilleries are forced to walk a tight line in the early years. Release a product too young and you may lose customers. However, cash is king and most businesses aren’t positioned to sit and wait for 3-4 years with little to no revenue. 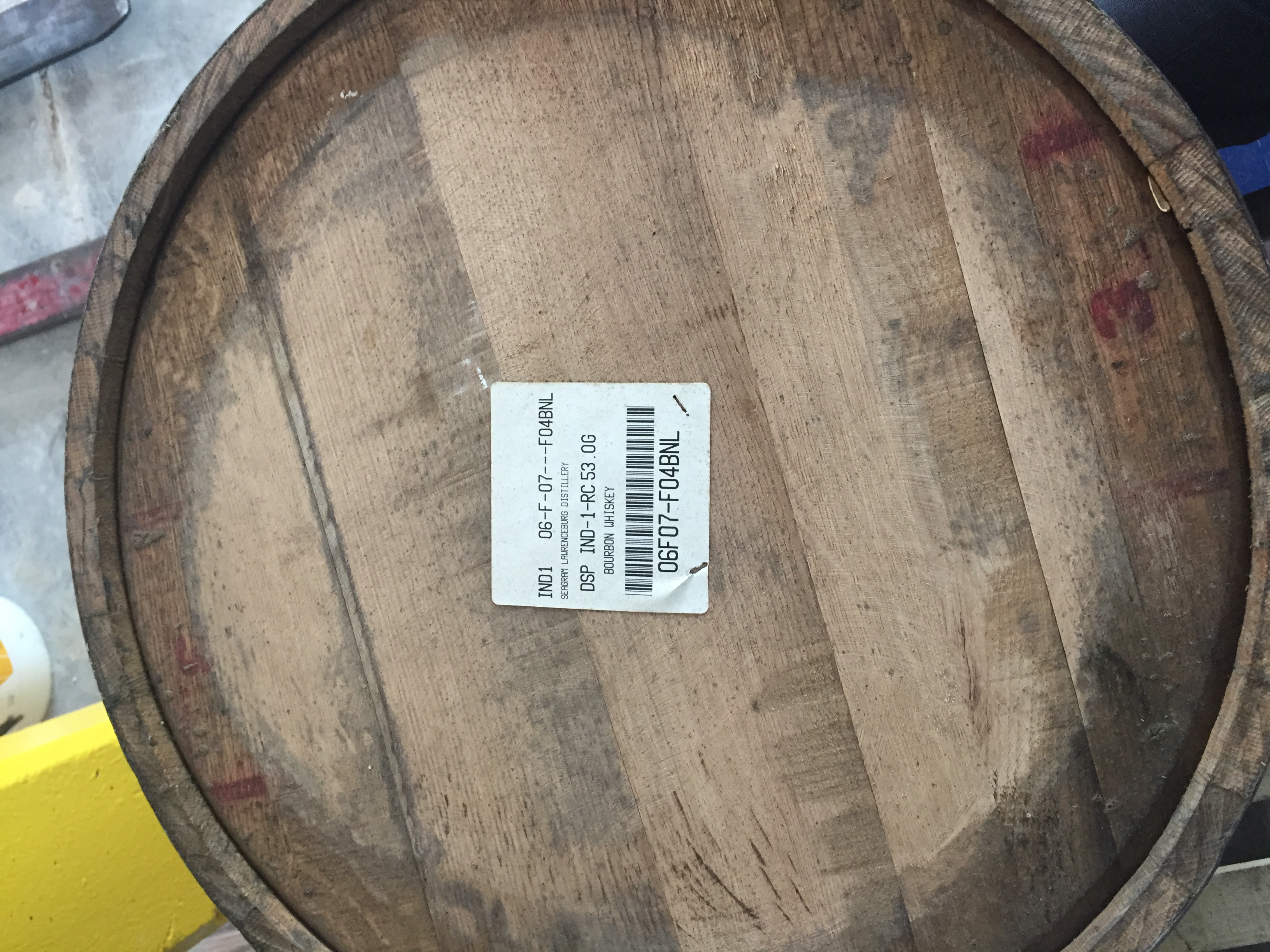 After considering a sourced product, the hunt begins. It would be great to be able to call a distillery and casually buy barrels. Unfortunately, that’s not how it works anymore. Ten years ago, distilleries would have loved that call. I’ve heard that distilleries currently receive dozens of calls daily from people trying to buy barrels. When supply is limited for your own brands, it’s hard to wholesale barrels to a competing brand. Because of the bourbon boom, most Non-Distiller Producers (NDP’s) source whiskey from MGP in Indiana, an unnamed distillery in Tennessee (most likely Dickel) or the treasure trove of whiskey owned by Diageo. If you have $500,000+ allocated for barrel purchases you can buy directly from one of these sources. If not, you’re looking to whiskey brokers for a deal. This is the interesting part. These whiskey brokers send out a list of their current stock with prices. A few years ago, this was a variety of products (bourbon, rye, wheated, etc.) from different ages. Most whiskey available today is less than six years old.

In March of 2016, Manifest received an email from a whiskey broker with a 9-year old bourbon from Indiana. The broker didn’t name the distiller. But, because of the age, location and mash bill, it wasn’t hard to figure out it was MGP. The price was fixed, as well as the minimum number of barrels to purchase. After some haggling, we were able to request samples from several of the barrels. I’d be lying if I said I wasn’t nervous about the barrels. I’ve had enough MGP bourbon to know that they make a good (and a lot of times great) product. Paying thousands of dollars for barrels you haven’t tasted is still a scary thought. Luckily, we were able to taste a couple of the barrels and we were impressed. The lot was all distilled on the same day and aged in the same warehouse. I would’ve liked to have tasted every single barrel, but we mitigated as much risk as possible. 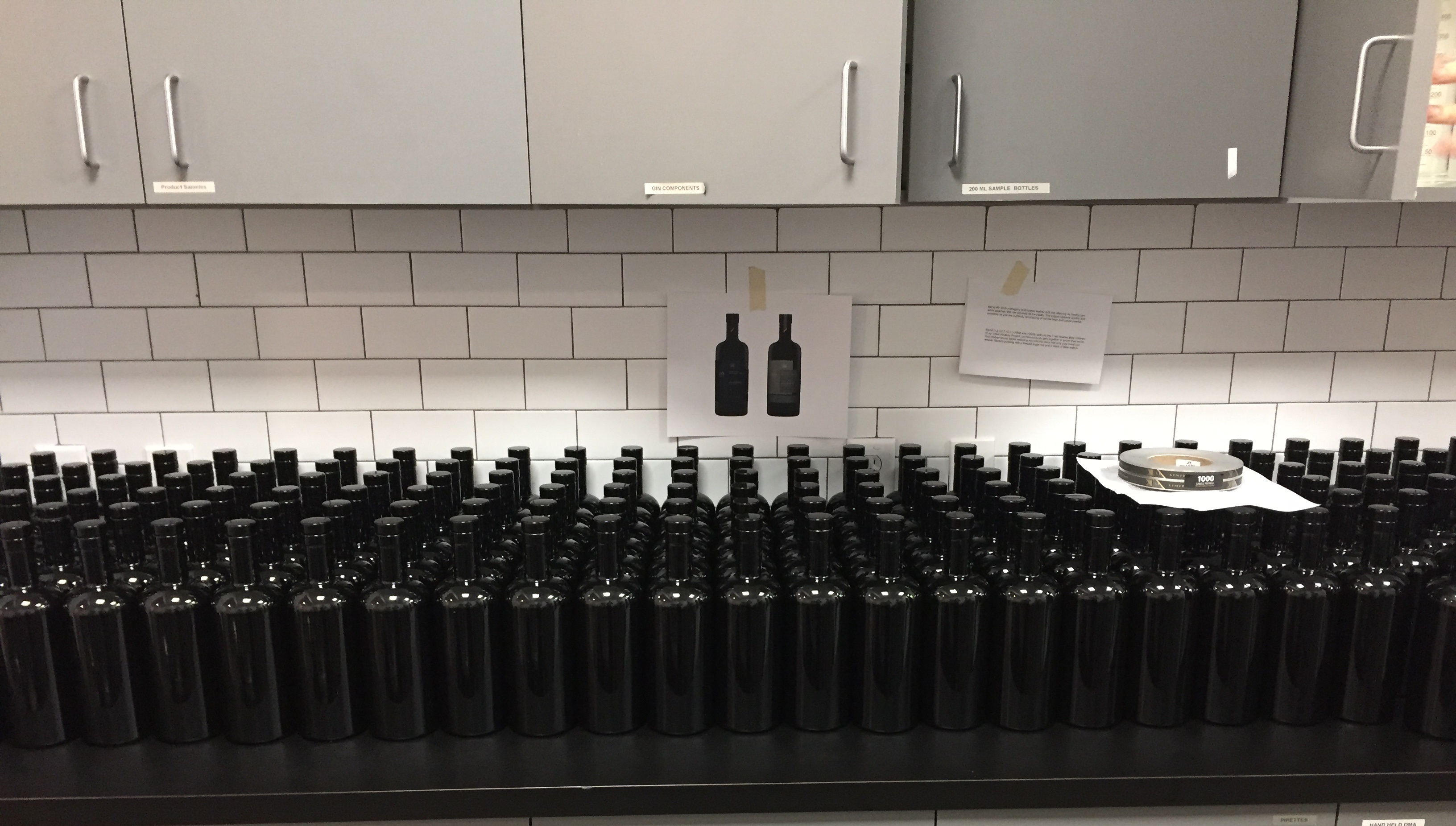 Now to figure out what to do with the bourbon. We discussed all kinds of options, including whether to use a barrel finish. The decision to release at least some of the bourbon at barrel strength was a given. We decided to taste all of the barrels before deciding their fate. Next step was to get the label and bottle designed. Manifest had already worked with a design firm on their Vodka and Gin bottles. The same firm was selected for this project.

The design process takes a lot longer than I realized. Ever paid attention the cork or topper on a bottle? What about the thickness of the label? I haven’t. This was new territory for me. Luckily, David and the Manifest team handled the majority of this. You’ll notice the MWP bottles are black. The only other whiskey I’ve seen in a black bottle is Lock and Stock rye. I was against the black bottle at first. But, after seeing a mock-up of the packaging, I was sold. It’s different and is something I can display in my home bar. One complaint we heard about the black bottle was you couldn’t evaluate the color of the bourbon in it. That’s on purpose, so you have to open the bottle and pour it into your glass! 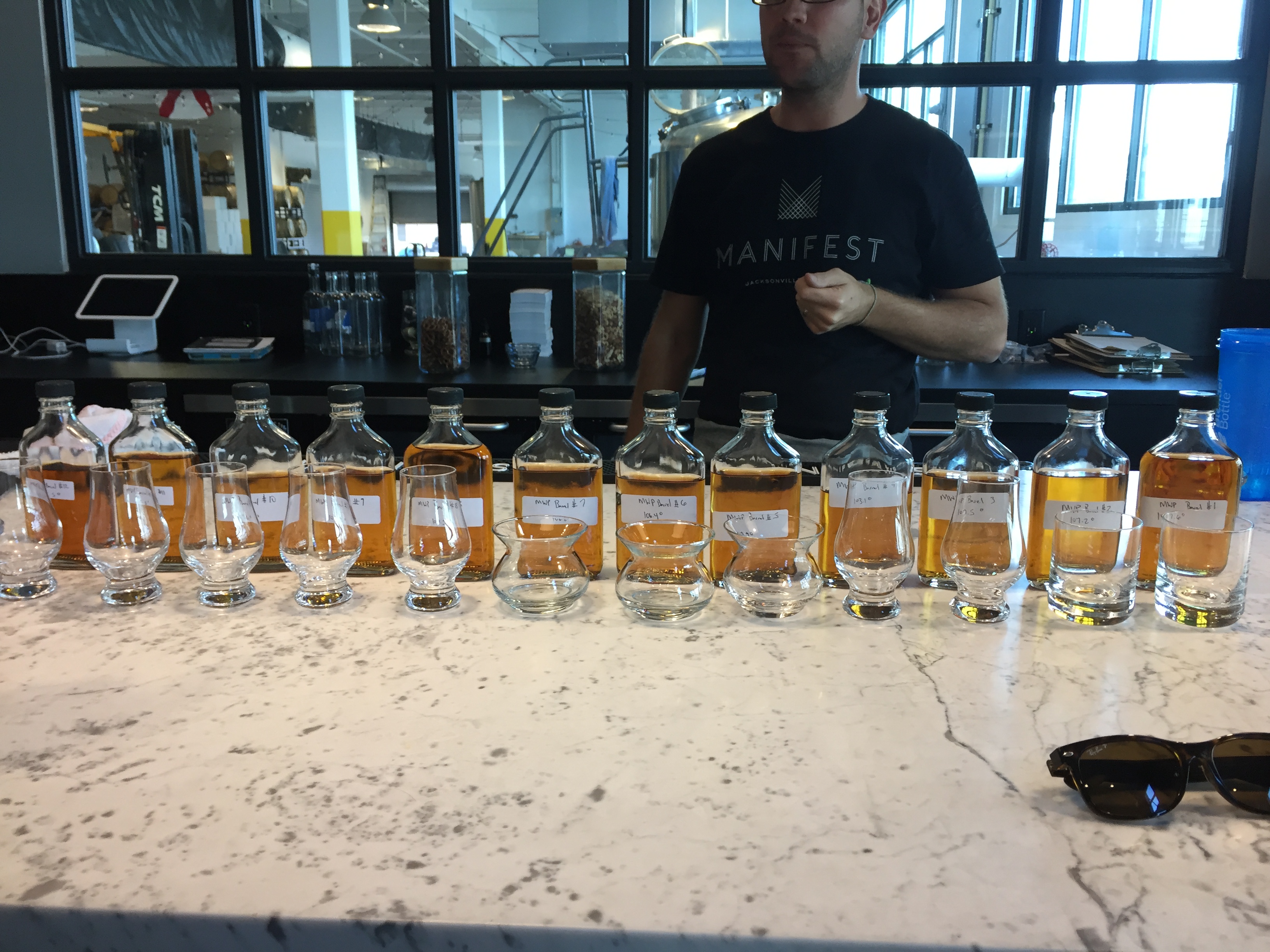 In August, Manifest brought the barrels into their warehouse. It didn’t take long (maybe 30 minutes max) until we were drilling into a barrel to sample. It was excellent! There was an undiscussed sigh of relief after months of working on the project without the product on hand. The plan was for a fall release. Unfortunately, some delays in the bottle order threw this off. In the interim, the barrels hung out in the Florida summer.

In early October, samples were pulled from each barrel for the selection process. The idea was to go into the tasting open minded. There may be barrels that would make great single barrels while others that would improve with blending. If a barrel was too hot, maybe we’d use a cask finish to round it out. Tasting 12 barrels is fun. That is until you get to barrel number eight and realize your palate is blown. Tasting commenced again the next day. After the first day of tasting, there were three barrels everyone agreed should be a single barrel release. After tasting some other barrels and playing around with some blends, we were left with five single barrels and a blend of seven barrels. I can’t explain exactly how we arrived at the small batch release, but once we tasted it we were sold. With the single barrels, there was no question to bottle at barrel proof. The small batch was a different story. At barrel proof, it was around 110 proof. We tasted it at 110, 100 and 94. While I love barrel proof as much as anyone, the 94 proof version was the clear winner. As most of us know, it’s amazing what a little water can do to a product. Tasting a 10-year-old product, that had lived the entirety of its life in a space devoid of light only amplified this effect. From an aromatic standpoint, the difference between 100 and 94 made it an easy decision.

As we inched closer to the finish line of this project, different issues arose. How should the release be handled? The goal is to share the product with as many people as possible. When there are only about 2,200 bottles, tough decisions must be made. Pricing is another concern. Manifest took a straight-forward approach to this portion. At this point, they knew the project’s total cost and simply backed into a reasonable profit margin. What sits on the shelf at $90 means the producer sold it to the distributor for around $45. 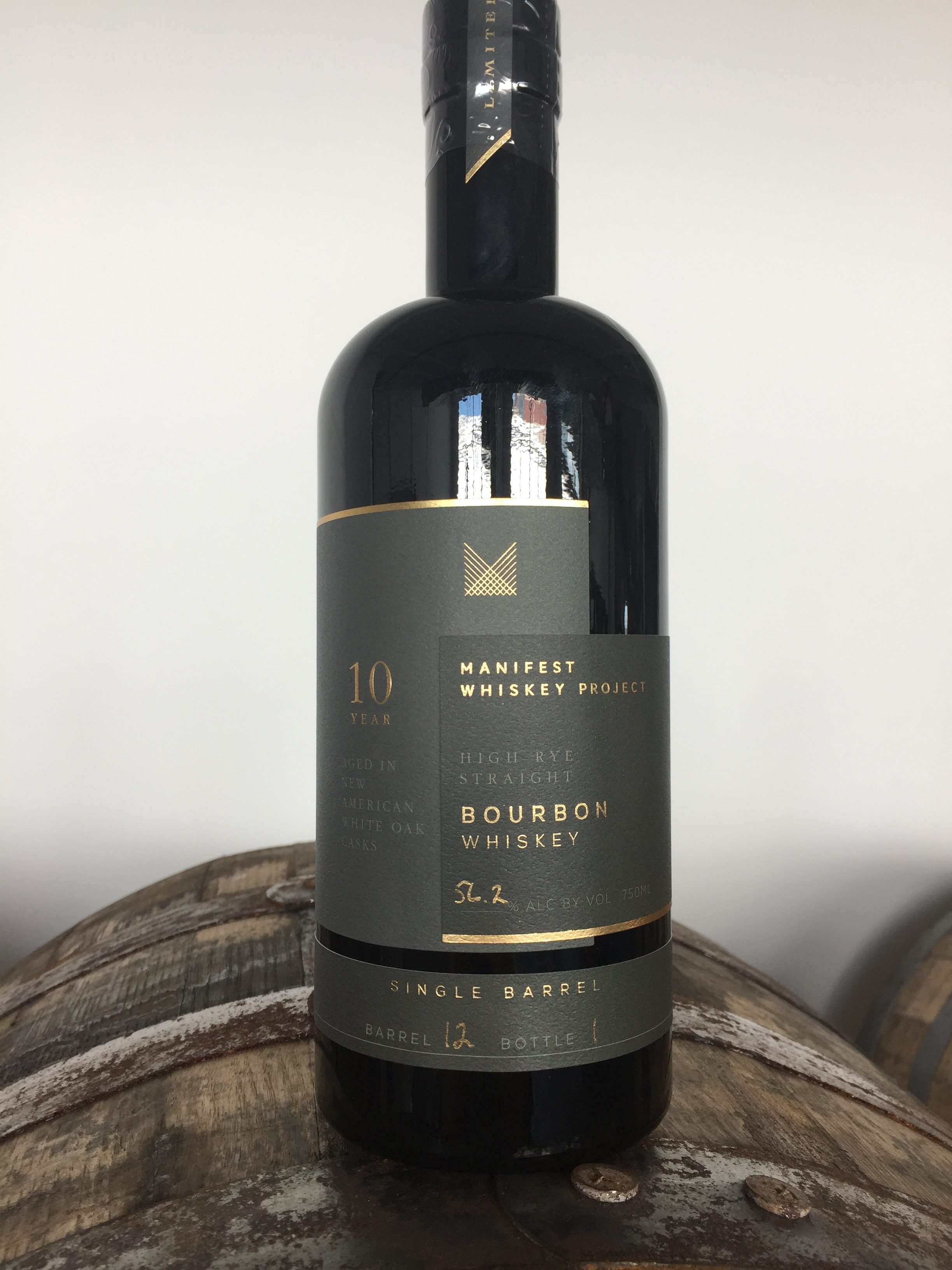 In early November, the bottles finally arrived and the product started to come together. The Manifest Whiskey Project was complete. I couldn’t be prouder of the finished product! In all, the project took about ten months. There is a huge learning curve with projects like this, but I had a blast working on it. If you’re interested in a bottle there are still a few left. Just follow this link to MWP barrel #12 (my personal favorite). If you prefer a more peppery and oaky bourbon you’ll probably like barrel number 4.

Fantastic article Blake! Great to learn about the behind-the-scenes of what it takes to buy a sourced bourbon, taste, design the label, etc. Very interesting. hopefully I can get my hands on a bottle – dumb Indiana laws prohibit shipping into our state. Well done to you and the Manifest team.

Very odd that it cant be shipped to NYC. Ive purchased bottles from other websites with no issue.

TeeFred,
New York state recently enacted a law forbidding shipping into the state. We are a NJ retailer who had a lot of customers in the state I can tell you anyone still doing it is breaking the law.

So $90 for a 9 year old at 94 proof bottle of MGPi bourbon? I can still buy 10 year SA OS at barrel proof for $55. And they got to pick directly from MGPi, so they did not get the leftover barrels that went broker route. You may be proud of it, but it’s too darn expensive and sane bourbon drinkers, not sure if there are any of us left, will stay away.

10-year for $90 on the single barrel and $69 on the small batch. You’re free to think it’s too expensive. That’s the point of the post. To give insight into what happens on these releases. If people think it’s not worth the money that’s fine. I’m sure you had similar conversations when Garrison sold a five-year-old bourbon for $220.

OK, the article was unclear on the price of the small batch. HH sells Henry McKeena BiB 10 year for $29 at retail. They are making money on that. I imagine all the big guys have very similar production and aging costs. NDP’s are desperate for aged stock to sell and the asking price for it keeps going up. I know it’s supply and demand, but at some point I hope consumers say enough.

No craft distillery will ever be able to make bourbon as cheap as the big guys. They have to learn to make it different and then the consumer can decide if it’s worth to support a craft distillery. And yes, $220 is crazy price for a 5 year old bourbon.

Not sure why you root against the guy. Yes, it’s a bit expensive, but you don’t have to buy it. Obviously the consumer has already decided they will pay $90 for a 9-10yr old single barrel. The beauty is you don’t have to. Enjoy your McKenna.

Blake, are you a partner in Manifest Distilling? If not, were you paid for your participation in this product development?

I’m not a partner in Manifest Distilling. But, most likely I will be paid for my participation down the road.