Check out our 2014 Pappy Countdown by State!

12/3/13: Pappy in New York , Califonia and Washington! Not sure if it’s hit the city yet. Pappy Van Winkle has come and gone in Maine and New Hampshire. Very limited supply – Pappy in Minnesota as well

That is probably the last big push of this Pappy Season. If you missed out we have a consolation prize for you

11/12/13: Pennsylvania and Texas has Pappy – No rumor, Kentucky (Lexington) has Pappy. Pappy Van Winkle in South Dakota and Arizona

11/5/13: Heard the rumor over the weekend but it is now official, Tennessee has Pappy (Knoxville); Pappy in South Carolina (Someone make sure Spurrier gets a bottle)

10/31/13: Pappy continues its trip around the Midwest and is now in Indiana (not sure of the city)

10/30/13: Pappy in Illinois. Looks like the Midwest is is starting to get all the Pappy. Add Missouri to the list as well

10/29/13: Wisconsin is now serving Pappy. To clarify, this was Old Rip 10 yr so there is still hope for Pappy if you didn’t get any

10/22/13 Update: While there has been some discussion on whether or not the KY Pappy was 2013 or 2012 release I received some pretty good tips that Pappy has hit NC and NV. Be on the lookout Bourbonrs in those areas!

Pappy is the new iPhone!!! Except the iPhone never brought me this much joy

-The Pappy in Louisville was leftover 2012 Pappy. Still has not been released in KY

Old Rip Van Winkle did announce that they were not going to have a Spring 2013 release. That should mean more bottles for the Fall!

Please email Blake@Bourbonr.com if you know of a state where Pappy Van Winkle has been released but isn’t on the map

Or, if Florida doesn’t see any Pappy soon and anyone wants to share please email me too 🙂

While you’re waiting get our new iOS app and start building your Bourbon Library -FREE!!

Pappy Tracker App: Check out this app that tracks all Pappy sightings! 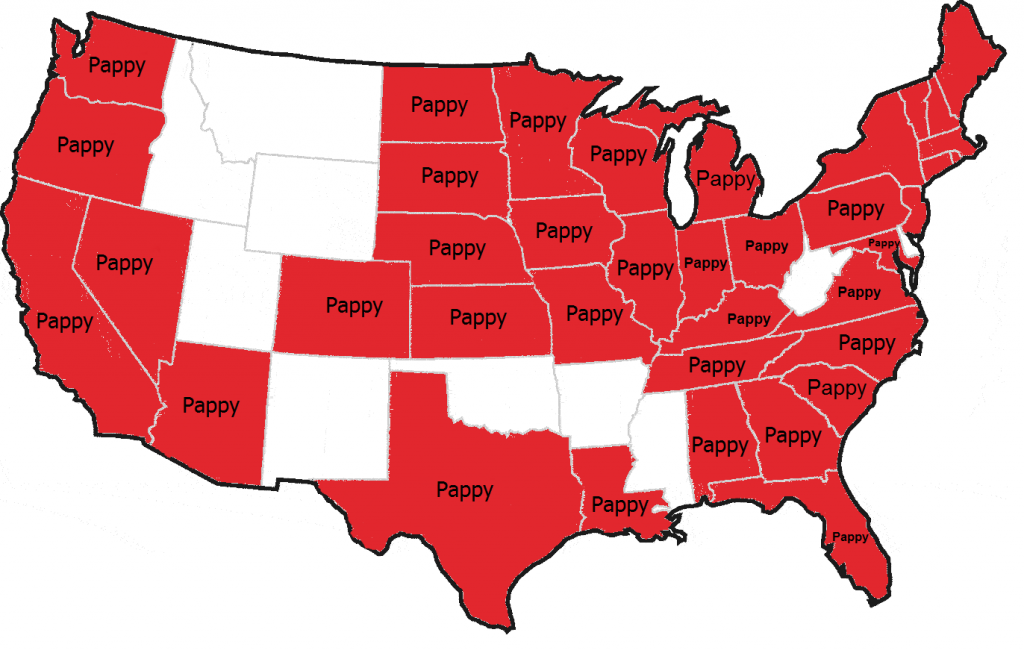 not sure where the word on Pappy in NJ came from, but it may have been premature. I’ve been calling all over and went to several stores last night in Northern NJ. Nobody has seen anything. They have been assuming it was going to be 11/19, but that’s come and gone and they still have no bottles.

Maybe some stores did get it and put it out, but the majority of the state is still dry.

My report came from the Southern part of NJ and is reliable. Could be it hasn’t made its way up yet but probably will soo

Pappy has only come out in Madison, WI. Have you heard any rumblings about when it may come out in the rest of the state?

Sorry, I have not

Just wondering if there is any info on where to purchase ANY of the top shelf BT products in North Alabama?

Pappy has been released in NY state today! I got a 20 yr in hand.

Hi. May I ask how much you paid for it?

Pappy was released in NY state today. I was able to get a 20 year!

Thanks, Eric! What city?

Actually all of western NY now.

I just left the lottery, although i did not get any Pappy there were 5 bottles here in Tacoma, WA as well as all BTAC……maybe next year.

Anyone know where the Pappy has been spotted in CA? Just called a few places in the bay and they still haven’t seen anything.

BevMo and Total Wine have received theirs

BevMo in Los Angeles sold there’s based on a lottery. Pappy 20 in hand!

Stores in Connecticut were receiving Pappy on Wed. (Dec. 4).

My wife got it! Pappy 20 in Los Angeles!
she won the lottery at the local BevMo. When she went to pick it up she said there was a crowd of people looking to see who won. Guess Christmas came early for me this year. This is gonna look great next to my George T Stagg!

Any idea when it will hit Virginia?

I haven’t heard many rumors about Virginia. I am surprised it has taken this long

Any word on Pappy in TX ?

Yes, it released about a month ago

Reply
Pingback: When You Can Find (Maybe) a Taste of Pappy Van Winkle Bourbon in 2014 | The Pursuit of Pappy