Jim Beam released two new whiskeys this spring, Booker’s Rye and Knob Creek 2001. The Knob Creek brand started in 1992 as a part of the Beam Small Batch Bourbon Collection (although Chuck Cowdery has a great post about how the brand may go back even further). It’s one of my perennial favorite everyday bourbons so I was pretty excited about this release. 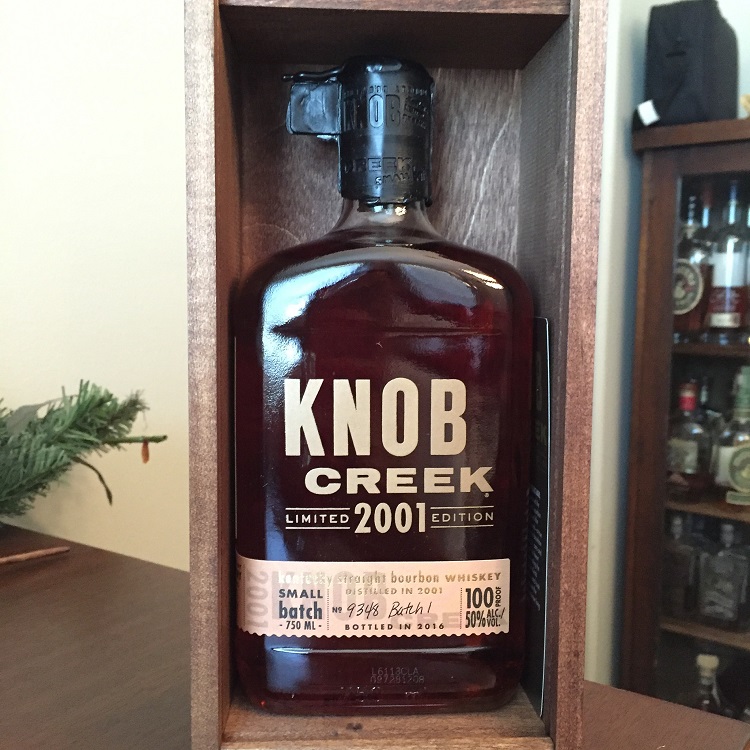 Knob Creek 2001 Limited Edition Bourbon commemorates a significant year for Knob Creek, as late in 2001, the tradition and responsibility of stewarding Knob Creek Bourbon was passed from Booker to Fred — from father to son. This release, made from barrels that Booker laid down in 2001, was finished by Fred Noe in honor of all he learned from his father and stays true to the pre-prohibition standards that Booker sought to restore when he introduced Knob Creek Bourbon. Bottled at 100 proof and aged for 14 years, longer than any other Knob Creek release to date, this bourbon has an even bigger, fuller flavor than what Knob Creek fans have come to love. It will be released in three limited batches, each accentuating distinct notes of the 14-year-old liquid, for a suggested price of $129.99 for a 750ml bottle.

This review is going to be a little unique. First, here are my tasting notes from the day I opened the bottle: heavy mint, char, and spice. Slightly sweet but more herbal and spicy. Reminds me of an over proofed Basil Hayden. If you’re a fan of drier bourbons or Four Roses OESQ, you will enjoy this bourbon. Second, here are my notes after tasting the bourbon two weeks later: sweet, cherry, and spice. There’s some vanilla, oak, and tobacco on the finish. I’d still put it in the “dry” bourbon category but a much higher level of sweetness after being opened for a couple weeks.

This bourbon morphed more in two weeks than any other bourbon I’ve had. Initially, I thought I had a bottle from batch two based on the flavor notes in the press release. After getting some air the bourbon tasted much closer to the batch one notes. The ultimate question is does it merit a $130 price tag. I don’t regret buying my bottle but I don’t think I’ll grab a second. Part of the reason is because Knob Creek private barrels are too good for $40. If you’re looking for a special occasion bourbon this is a good option.

I’ll be interested to see how the other batches turn out. There’s around 12,000 in each batch so finding a bottle should be too hard.

I’ve found many bourbons benefit greatly from a few weeks or months of oxidation. Almost always, they become fuller and sweeter, sometimes bordering on cloyed. Eagle Rare immediately comes to mind. Man, that one becomes dangerously easy to drink after oxidation kicks in. Cheers!

I agree completely, I have a bottle of Batch one also and I am glad I have it but I wont buy another. I have a Westport Whiskey store pick that is much better and more interesting and for a lot less money, I would have like them to have made this cask Strength.

Haven’t seen one locally yet, not surprised. I saw though somewhere for 165 plus shipping. Really not sure I want another “collectible ” for so much. I have so many for special occassions and nobody to drink with , that I prob will wait to see many be lower price

Any Idea on when this will be released? Or has it already been in local stores?

depending on where you are, they should be out, i have all 3 batches locally, have already bought 1 and 3

Thanks Blake, timely and very helpful. I was ready to buy one but it doesn’t sound like a style I’d especially like.

I decanter most of my bottles. Getting the “bottle phenols” out can reveal a wealth of taste even to the layperson selections.

Well, im not impressed. I’m gonna skip buying this one….the reviews on the internet haven’t been so great. When I see it at the bar, I’ll give it a try there, who knows, maybe I’ll change my mind after a taste and buy one. I’m always scared off by bad reviews.

Way too expensive. With the Knob Creek Single Barrel priced at about $300.00 per gallon, I just can’t see paying $600.00 a gallon for something that’s not being reviewed favorably. I think the prices of spirits, all of them, are way too high. Even Old Crow is selling for $50.00 per gallon.

Reply
Pingback: A Guide to High-Proof Bourbon, the Only Whiskey Fit for Dad – IronGutsGlory

I just purchased a bottle of this as well, but it says batch 4 #6538. I thought there were only 3 batches.

I just found a batch 4 and a batch 5 in Key West. Couldn’t leave them there. Still can’t find any info on either.