You’re probably thinking “does a winner need crowning?” Bourbon purist wouldn’t dare add anything to their bourbon. Much less cheap sugar water. However, bourbon and cola is a timeless mixed drink. Some prefer coke; others prefer Pepsi. What remains the same is the bourbon. I’ve been testing different recipes of bourbon and colas for a long time. Some could say I may have put in a little too much research in my college years. I decided to set up a blind tasting to find the answer. I know everyone is dying to hear “what makes the best bourbon and cola?” 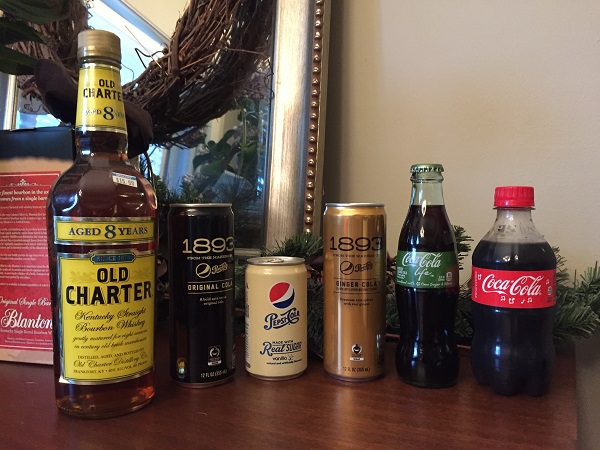 If you follow me on Instagram, you may have seen my picture from this weekend. The blind tasting included seven different colas:

I recruited some of the best tasters I know for this experiment. Unfortunately, none of them cared to take part in this tasting, so I was stuck with a buddy of mine and my brother.  Despite thinking, they were coming over only to watch the GSW v. OKC game 7 the tasting was a success.

1 –  A lot of vanilla. Has to be Pepsi vanilla. I like it but I really like vanilla coke so I’m not sure how that fits into the overall tasting.

2 – Not as sweet. It’s refreshing and the bourbon pairs well

3 – Huge kick of ginger. Not a fan of ginger and coke. Would fair better in a mint julep type of drink

5 – Similar to 4 but a little sweeter

6 – This is really good. The right amount of sweetness. Hard to out actual tasting note to it other than to say it’s better than the others

7 – Wow. This is fantastic. Hands down favorite. I even tasted back through all the glasses again and it still stands out as the best. 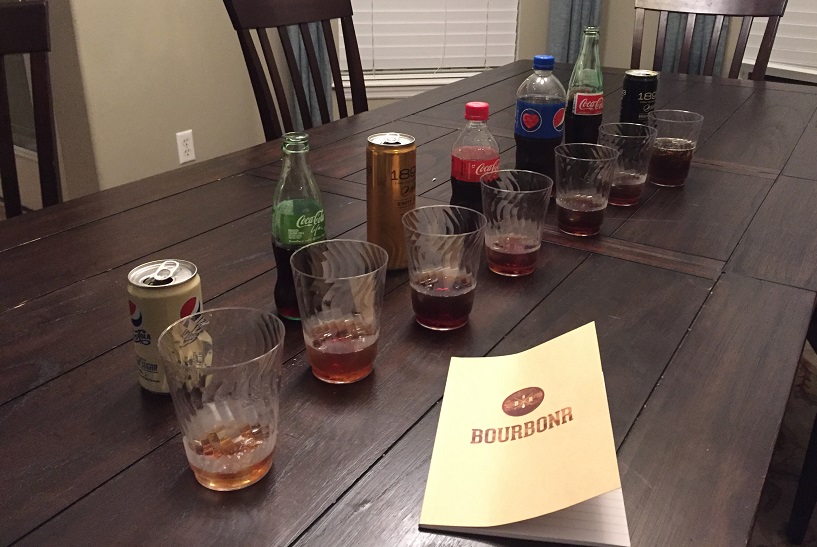 Pepsi 1893 Original Cola was the winner by a significant margin in my book. It was the only cola that showed up in all three tasters top 3. I’ve seen Pepsis commercials obviously marketed to the whiskey crowd. There’s a guy tasting 1893 out of a snifter and he’s surrounded by barrels. I was sceptical of the marketing but the product is really good. I don’t want to sound like part of their advertising strategy but if you like bourbon and cola, 1893 is worth trying out. Second place goes to Mexican Coke. I was surprised how much of a flavor difference there is between the same cola sweetened with real sugar and hydrogenated corn syrup.

Conclusion: Enjoy your bourbon however you choose. But, if you plan on mixing, I’d stick with bourbons that cost $15 or less for 750 ml bottle.

Ah Hirsch 16 & Surge or you’re not doing it right

Only a communist would drink Pepsi….

My Man!! Preach it Bazooka Joe!

If you have to mix your bourbon with something other then straight up then you should not be drinking bourbon at all.

You want to know something strange is that my mom used to drink Old Charter and Tab and she thought there was nothing else like it.

Your mom was one cool lady!

If you have PVW 23, and you mix it with ANYTHING (including ice); you do not deserve PVW.

Jack and Ginger (or Jim, for you nitpickers) with a twist of lime is a pretty refreshing drink

I love JPS 17 with cranberry juice

Try Woodford and Cherry Coke (not a substitute) Very tasty!

I truly believe that if you buy it, you can drink it however you want. I love bourbon and have had it a myriad of ways including mixing with cola. I try not to name call, but only a pretentious snob would tell someone that they don’t deserve bourbon if they drink it any other way but neat. That’s like calling yourself a music fan but you only like rock and roll or R&B or jazz. So, Blake, what do you think about chefs who say they wouldn’t cook with a wine they wouldn’t drink? Shouldn’t the same axiom hold true for bourbon and cola? Wouldn’t a better bourbon make a better bourbon and cola?

My go-to mixer with coke is Makers Mark, and makers isn’t a $15 bourbon last I checked. 😉

I’ve had pretty much every bourbon I’ve ever drank with Coke (or Pepsi) at one point or another. Each bourbon adds a very distinctive taste to the cocktail.

Lately I’ve been drinking Old Grand-Dad 114 with coke. It’s a definitely a good one, especially at its price point.

Jack is not bourbon… its a blended whiskey

Sorry this one was supposed to be a reply to David above.

Jack Daniel’s Old No.7 is a Tennessee Whiskey. By definition it’s everything a straight bourbon is, plus it’s charcoal mellowed, plus distilled and bottled in Tennessee. All bourbons unless they’re single barrel bourbons are “mingled” or “batched”, which is what I think you meant. Blended in the U.S. implies that neutral grain spirit has been mixed in with the whiskey. This is not true with Jack.

Thanks for clearing up that common misconception, Sam!

I also have to disagree about mixing cheaper bourbons. As any chef, bartender, or mixologist will tell you, the better the ingredients the better the flavor or taste. Although I like some of the wheated bourbons straight, I much prefer a Bourbon & Coke mixed in exactly the correct portions. There is a point where the precise mixture is “perfect” and truly becomes another thing entirely–a blend of the two that is its own entity. So much so (to me) that the drink must be consumed quickly before the ice melts and dilutes the drink into something else entirely. (And no I do not favor non-ice chemicals in balls or cubes to keep the drink cold–that just seems artificial to me, besides being possibly harmful if the plastic cube were to leak chemicals into the drink.) Although you might not agree with me as to which combination is “perfect”, I know mine when I taste it. I compare this to the different old-timers master distillers knowing precisely when to bottle their bourbons and/or blend them according to their own tastes. This was their art. And mixing good Bourbons with Coke, Pepsi, or whatever, is an art and a special taste, not to be maligned by those who favor a different taste and experience.

Good ingredients make a better cocktail and excellent ingredients make an excellent cocktail. This is what Paulius Nasvytis owner of the Velvet Tango Room told me nearly 20yrs ago when giving me advice on making Manhattan’s at home. It was this advice that lead me to tasting bourbons and finding my passion. PVW 23 in a cocktail? Why not! Bad ingredient don’t make a good cocktail! Cheers Brothers and Sisters of Bourbon!

What a bunch of Bourbon snobs. People should drink the way they want. Not the way you like it. If you care that much about Bourbon you probably drink too much.

Maker’s Mark and Diet Coke with a twist of lime is by far the best in this catagory!!!!

I once drank a fifth of Beam with Coke at a Bengals game and saw two games for the price of one.

not sure I’ve ever had bourbon that costs $15 or less!? agree w the majority- good ingredients =good cocktails 🙂

‘Coke’ and bourbon are great together or so they say Wooohoooo I could post all night!!! Mixing soda and whiskey is a rookie move. We have all done it and thank God we did. Our appreciation for fantastic bourbon had to start somewhere…

If you like it drink it. I just feel I control my buzz better when I drink straight whiskey
and I like the flavor. Some cocktails taste great though.

For me, it all depends on my mood at the time. I drink it straight from the bottle, on the rocks or mixed with Coke, or other sodas and alcohols.

Exactly. I drink more neat whiskey than most. But, if I’m outside and it’s 90 degrees I’m not pouring my bourbon neat because some unwritten rule or principle says I have to.

I enjoy mixing SOME of my different bourbons with different mixers—for example, I like my ETL just the way the Ol’man liked it himself, mixed with Sprite (and a squeeze of lemon)……I *really*like that combination., as the Sprite soda marries well with the sour mash taste…i also LOVE PVW (not the 15, 20 or 23 bottles) mixed in a cocktail with wild Muscadine grape juice and a squeeze of fresh meyer lemon juice, delish!!! And OGD 114 is absolutely PERFECT with ginger beer and a squeeze of fresh lime (Kentucky Mule)… I use the Crabby’s alcoholic version…tasty!…MM cask strength in a mint Julep is wonderful!…. some bourbons just taste better in a cocktail and with ice (I use crushed, cubes-all sizes and shapes, and my *favorite* >Sonic ice pebbles>superb), shaken and or stirred,lol….However; i would NEVER use my BTAC William Larue Weller, BTAC George T. Stagg, Bookers, and some of my Van Winkle expressions in a cocktail, i enjoy those as is, cask strength, but of course that’s a personal thing….oh well….I could go on and on with some wonderful cocktails I’ve had and loved over the years, but I will stop.

Thanks for your concoctions! I’ll have to tackle of few of those! And, you are so right as well as Blake advise. I had a buddy come over last night and we’re doing a few taste testing starting off with Evan Williams..nope! Didn’t do it for me so used Vernors Ginger Ale and then enjoyed it. Then, tried Knob Creek Small batch.. Better but still nope… Added Vernors to that.. And Wonderful! Then, WL Weller 12yr.. WONDERFUL on its own!! No mixing with Weller. And, the ECBP Batch #6 – AMAZING!!! A good Bourbon deserves to be enjoyed solo!!

Bourbon is an experience and there is no “one way” to experience it. For you In-N-Out fans on the West Coast it’s like a Double Double vs a Flying Dutchman. Both great burgers but totally different experiences. I once ordered a PVW 20 and coke at a very contemporary bar with an extensive whisky menu. The bartender practically had a heart attack and I am pretty sure he checked with the bar owner
before serving it :). The order led to a long conversation with the bar owner about all things whiskey. We talked for hours, sampled many whiskeys both mixed and neat. The end result were several changes to his premium whiskey menu, his artisan cocktail menu, and a long lasting friendship.

This whole BS about not mixing bourbon with Coke is nonsense. Summers in Texas are only bearable drinking bourbon and Coke. Being a hot, sweaty mess is much more tolerable with a tall, iced, bourbon and Coke! Although I may balk at mixing some bourbons with Coke, it’s only because some bourbons mix better with Coke while others are better expressed neat. As for price, it’s more about how easily replaced the bourbon is than how much it costs. I can easily taste the difference in bourbons mixed with Coke. At least to the extent that if I didn’t like the bourbon neat, I’m probably not going to like it with Coke any better.

You just have to experiment and see what you like Basil Hayden’s on the rocks, Buffalo Trace and R.C.Cola, Eagle Rare and Diet Dew, Makers Mark in an old fashioned just drink and enjoy.