Buffalo Trace just received approval for a new expression in the EH Taylor line. E.H. Taylor Four Grain will be a mix of corn, barley, rye and wheat. This will be the fifth expression in the E.H. Taylor line. To be honest, things are getting a little confusing. I defended Season Wood while others were claiming it watered down the Taylor name and a wheated bourbon didn’t belong in the brand. Now that Buffalo Trace appears to see the EH Taylor(EHT) line as their launch pad for limited releases I find it strange. Isn’t this what Buffalo Trace Experimental Collection (BTEC) is for? Maybe, if a release is exceptionally good it skips BTEC and goes straight to EHT?

Some other questions I have about the release. Did they start with a four-grain mash? Or, is this just a mixture of rye bourbon and wheated bourbon? 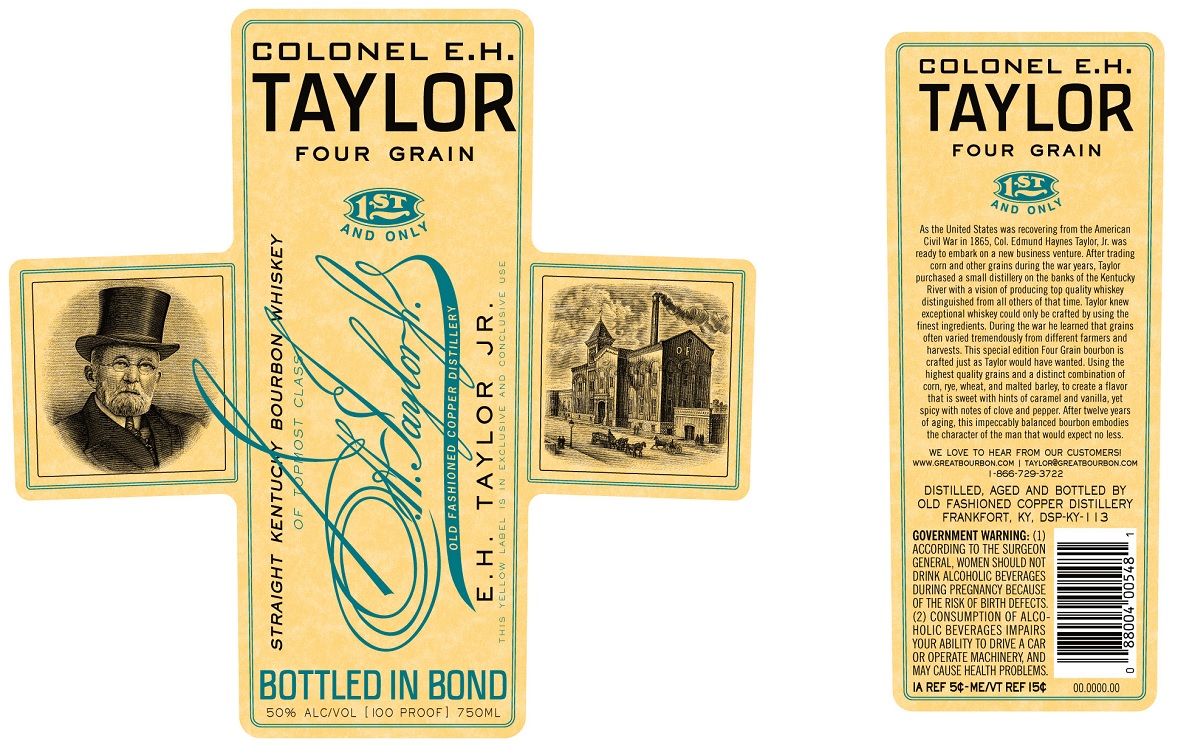 Will it sell? Absolutely.

The standard EH Taylor line has been an accessible great pour for years. This new hype bullshit is getting old and promoting more hoarding and flipping. I’m a fan of new releases but this is getting rediculous. Buffalo Trace is laughing all the way to the bank. What’s next, Pappy Laborers Hidden Stock found in an abandoned janitors closet from Stitzel Weller?

Actually, “Pappy Laborers Hidden Stock found in an abandoned janitors closet from Stitzel Weller” is already on Wine Shlepper & Bottle Shlock!! $6000.00 a bottle!! You have SOLID releases w/ the Small Batch, Single Barrell, Cask Strength, & Rye. WHY do we need all this other crap? Sure, “Cured Oak” was tasty but, as the above stated – this is adding to the problem (Flipping / Gouging).

How is BT laughing all the way to the bank? They’re taking a chance on creating an untested 12 year old bourbon and selling it for $85. That’s high, but that’s not laughing all the way to bank. (remember, BT makes no money off the secondary market). To take a big risk on something like that over the course of 12 years can easily warrant an $85 price tag. If it was Michters or Jeffersons, it’d be atleast $250… if not more.

I totally get why BT is doing this. It’s hard to come in with a new product under a new name and generate interest. They already established the Taylor brand. They know anything with Taylor on it is going to sell. If I were them, I’d do the same thing. With that said, as a consumer, it’s very irritating because I already know that it’s everything to do with Marketing and nothing to do with the juice and any association to anything to do with Taylor or the line. In my opinion, the Taylor brand has grown way beyond the Small Batch, which I really do not like at all. Almost everything else in the line is better than Small Batch. Taylor has basically become a way to lunch middle-tier stuff (not Pappy, BTAC, etc.) and ensure it’s success. Should it have been something else, probably but it’s not and we’re stuck with it.

BTEC is not bottle in bond either, correct?

the really astonishing thing to me is that they’re able to keep these under wraps for 12 years.

Personally, I’ll all for BT continuing to mix it up. The secondary market is what it is… that shouldn’t influence what the distillers are doing.

I’m not 100% sure here but I think this is the type of thing the EH Taylor line was meant for. The label itself, “1st and only”, implies that the particular release will be the only release in the line. The Single Barrel, Small Batch, Rye and arguably the BP are what don’t belong here.

Yippee!!! Here’s another hype and hands unicorn I can hardly wait to sell on bottle spot for hundreds of dollars! Mo money, mo money,mo money!!!!!

I’m looking forward to getting 20+ bottles this release too, it appears as if some cry babies from those private FB Bourbon pages are on here…. So many feelings