Micther’s Barrel Strength Rye was released in 2015 and an instant hit with rye fanatics. If you’re looking for a barrel proof Kentucky rye whiskey, your options are limited. Nothing against MGP,they make some of my favorite ryes. But, it’s nice to have a barrel proof, more traditional rye whiskey available. The bottle in this review is from the 2016 release.

Yes, Micther’s is an NDP, but they do control the process more than others. They use a barrel entry proof of 103. I suggest reading  Mike Veach’s article if you’re unfamiliar with how barrel entry proofs affects a whiskey’s taste. The source of Michter’s whiskey is still a mystery. But, it has to be Heaven Hill or Brown-Forman. Michter’s contracts their bourbon from Brown-Forman. I wouldn’t automatically assume the rye is the same source, though. To me, its tastes comparable to Pikesville (Heaven Hill). 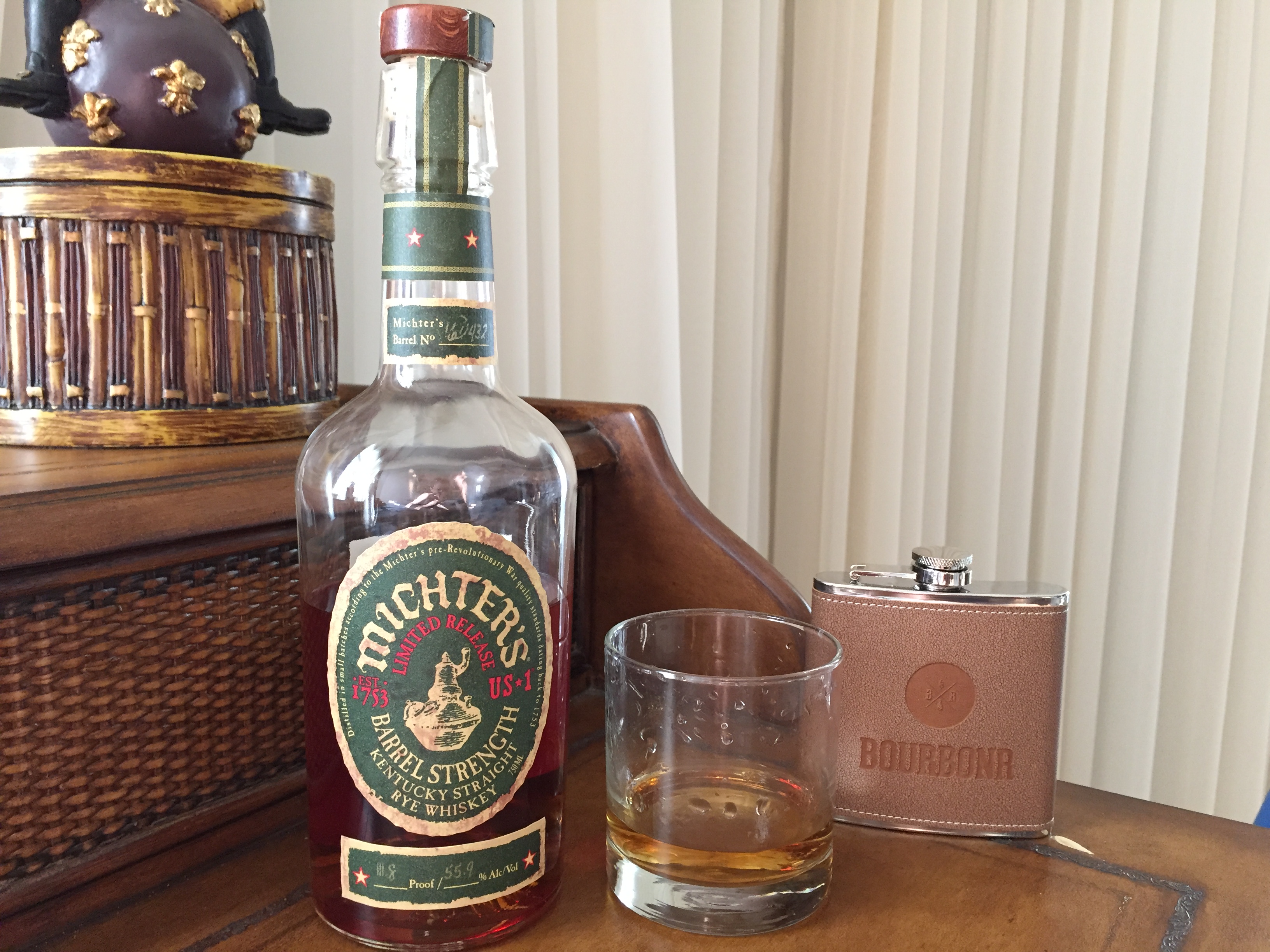 The nose is sweet. It’s fruity and vanilla. It’s an enjoyable nose with more honey, berries, and vanilla. Surprisingly, there’s not a lot of spice on the nose. My first sip is sweet and reminiscent of the nose. The taste is spicy plums, dried apricots and creamy. The finish is great too. It’s slightly oaky and reminds my of peach tea.

Conclusion: I like this whiskey. Actually, I love this whiskey! I may even like it more than the Michter’s 10-year rye. It hits my sweet spot with ryes. Not overly sweet. Enough proof and spice to balance it out. Most importantly, you can find Michter’s Barrel Strength Rye with somewhat minimal effort. I found it online if you’re interested (P.s. Bourbonr readers use promo code “thanks” for $10 off shipping). If you like rye’s and looking to spend a little bit of money this is a good place to spend your $75.

This and EH Taylor Straight Rye are my two favorite ryes. If you can find them, buy them.

That is an interesting comparison as Neither Pikesville (B+) nor Rittenhouse (B-) ryes, are barrel proof or as complex as the MICHTER’s barrel proof rye (A). These are all great rye whiskeys but the Michter’s barrel proof rye has a much more complex flavor profile and finish that makes it (or the 10yo MICHTER’s Rye) a preferred choice IMHO.

Everyplace near me is asking $90. Agreed that for the price I’ll stick w/ Pikesville. Plus after buying KC2001 I’m not in any mood to get swindled again.

After two tastes, no. Not as complex or even rich as I expect from KC. Had they asked $75 or even $100 then I wouldn’t be so upset. But I’ve had a few KC store picks I’d take over it and those are never over $40.

OK, after three tastes, I will admit the KC2001 (batch 1) is pretty good. Buttery and smooth, not the bold up front you get with the others in the Beam lineup but more nuanced. The finish is what keeps me from recommending it. It doesn’t linger and give you that rollercoaster on your tongue like you’d get with say a FR LE. You talk about a price point and I expect for something that expensive to really blow me away. It doesn’t. There’s still good (albeit dwindling) American whiskey for under $50 (and even $30). I honestly feel bad that my purchase helps justify the BeamSuntory greed.

Also, I just think Michters is a sleezy outfit. Would prefer to spend money on honest booze. (Jumps down from soapbox)

Yeah, they’ve had their missteps in the past. To be honest, though I’m not sure there’s a brand/distillery that hasn’t. And, some seem to be getting worse and I feel like Micther’s is improving. If the whiskey is good, I’ll drink it. Just my 2 cents as I know not everyone agrees.

Suing Bombergers for the name did it for me. Most distilleries embellish but I’d like to think we can reward those who do it as honestly as possible. Vote with your wallet.

I will say my Michters 10 from a couple years ago is amazing. But newer stuff that I’ve tried, especially the Toasted Barrel, just tastes like bad Woodford

I’m not a big fan of Michter’s either. Sketchy business and marketing practices behind bourbons that never quite measure up to expectation. The 10 year stuff is tasty, but that can’t save all their other mediocre offerings. Honestly, I think Michter’s wants to be Diageo when they grow up.

Just grabbed a bottle of this stuff from Total Wine, and I have to say it is fantastic. Very pleased w the purchase, as I was skeptical of Michters. Again, everyone has different tastes, but this is a delicious rye. Ty Blake.

I would have to agree with Horst and StandingPedals, Michter’s is sleezy. To me they are no better than Raj and WhistlePig. Yes some of their juice is good but I would rather spend my money on truth… Besides, Pikesville is always on the shelf here.

This is so correct. No way I’m going to grease the already greasy wheels of Whistle Pig and Michter’s. I’ll drink water if there’s no other choice

Never liked Michters anything….all of their stuff is overpriced and mediocre. Gave up buying their products in 2014. I’m not the slightest bit tempted to BUY this one either, will however TRY a pour at the neighborhood saloon if available.

Okay I hear all of you. I am not a huge Rye drinker. I am a Bourbon drinker and very rarely drink Rye. Bought a bottle for my office where we do some late afternoon deal done drinking. This was just yummy. Orange peel, cherry, cinnamon and cocoa for my taste buds. This might be heresy but I added two or three drops of water and found that the sweet flavors came out more. Without knowledge of their business practices I found this terrific!

“The taste is spicy plums, dried apricots and creamy.” Right on, Blake!!!! With that bit of spicy vanilla and berry.

To start I have never liked any Michters product.Nonetheless I have been buying this rye over the last year. Drunk neat, no ice. Each batch is different from another and all are very good. Some are superb. For the price it cannot be beat.

Truth is I made a rookie mistake buying this. The guy behind the counter told me that is was 10 yr and I jumped on it without looking closely at the label. Really pissed when I got home and discovered my mistake. I am not a raw beginner but no expert either. In my case you really need to do your homework on mitchners bleeping labels unless u really know your stuff. The good news is that I cracked the bottle and found it quite enjoyable. Not the monster finish I would expect but tasty nonetheless. No big fan of rye but this may open my change my mind after drinking some of the 50-60 dollar varieties and being less than impressed

Okay, I finally tried this and if you like it hot, hot you’ll get. But it’s better than just that. Still, Michter’s is a bunch of dirtballs. I need a shower now and will go to confession on Sunday after actually buying this. Lod, forgive me, I won’t do it again.