Whiskey gets complicated these days. There are so many moving parts it can be tough to figure out who made what. That’s why it’s nice to see something that easily explains  the whiskey making process. If you follow Bourbonr you already know I’m a sucker for a quality infographic. With the help of Mark Byrne, the guys over at Owen & Fred put together “WHISKEY: WOOD, WATER, GRAIN” They also made a corresponding video “How Whiskey is Made, in 30 Seconds”.

Mark Byrne is the former spirits editor for GQ. He played a part in helping Kings County Distillery get started. And now, he consults with both craft and mainstream distilleries on their branding and packaging. I got a chance to interview him about the 30-second video and other whiskey-related topics. 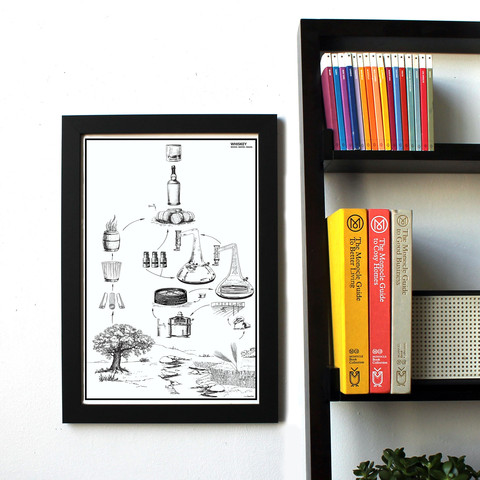 How did you get your start in whiskey?

– I worked at New York magazine out of school, where I met David Haskell. Shortly after I left the magazine, David reached out to me to tell me he was getting King County Distillery started. He asked if I wanted to help. I was working at Esquire during the day and then would head over to the distillery to work until 1 am.

What was your main role at Kings County?

At first, it was making the actual product. Then it became leading tours and evangelizing about whiskey.

Who came up with the whiskey in 30 seconds idea?

– It was a collaboration with Mike Arnot, at Owen & Fred. The video is a way to instill whiskey facts in a simple way. The average whiskey drinker doesn’t know about the process and, when broken down to its components, it’s really a simple process.

Do you think we over complicate whiskey?

– The big distillers make a big investment in mystifying the process. They don’t put a ton of info out there and it works in their favor to make it some secret process. Some will publicize their mash bill but most keep information like that private. Today’s consumer is interested is those details so we try to give it to them.

Kings County has one of the most unique bottle designs. Who came up with it?

The founder, Colin Spoehlman, wanted to pay homage to his Kentucky roots. They wanted people to be able to try it before really having to pay and that’s the idea behind the 200 ML. They also wanted a straight forward “un” branded bottle/label. The “un” branding actually turned into the best form of branding

Too bad they got a key fact wrong: “Charred American Oak” is not required to make whiskey.