The proverbial powerhouse favorite of the Antique Collection, George T. Stagg, comes in at a lower 116.9 proof this year. This is the lowest proof in this whiskey’s history. Master Distiller Harlen Wheatley cites barrels located on the lower warehouse floors as the reason. “Many of the barrels for this year’s Stagg composite were taken from the first floor of the warehouse. The first floor is cooler with higher humidity levels, therefore the alcohol evaporates faster than the water.” The taste, however, is still what Stagg fans can expect, vanilla and toasted oak with a floral undertone, followed by a long finish of cherries, coffee and black pepper.

Past releases of this uncut and unfiltered bourbon have won many top awards, including last year’s release capturing the Chairman’s Trophy at the Ultimate Spirits Competition. This year’s release contains bourbon from barrels filled in the spring of 2004. Storage location of these barrels varied across warehouses C, H, I, K, and Q. The evaporation loss for this year’s batch was 56%, a bit higher than last year’s release.

The Antique Collection’s uncut, unfiltered, wheated recipe bourbon is William Larue Weller. Previous editions of this wheater have won many accolades, including receiving 5 Stars – Highest recommendation by F. Paul Pacult’s Spirit Journal. The 2019 offering was distilled in the winter of 2007 and aged in Warehouse I. This bourbon registers in at 128 proof. The bold flavors include toasted vanilla and coffee.

Thomas H. Handy is the uncut and unfiltered straight rye whiskey. Last year’s release earned a double gold medal at the San Francisco World Spirits Competition. This year’s Handy was distilled in the spring of 2013; aged in warehouses K, M, and N, and weighs in at 125.7 proof. The flavor profile includes creamy butterscotch and vanilla.

Last year’s release went back to Eagle Rare’s roots with a proof change from the previous 90 proof back to 101 proof, in tribute to the original strength used when the brand was launched in 1974. The proof remains at 101 this year and will continue forward. The 2018 edition was awarded 92 points at the Ultimate Spirits Competition. This year’s release was distilled in the Spring of 2002 and has been spending its time aging on the first floor of Warehouse P. This bourbon tastes of cocoa, caramel, and oak. 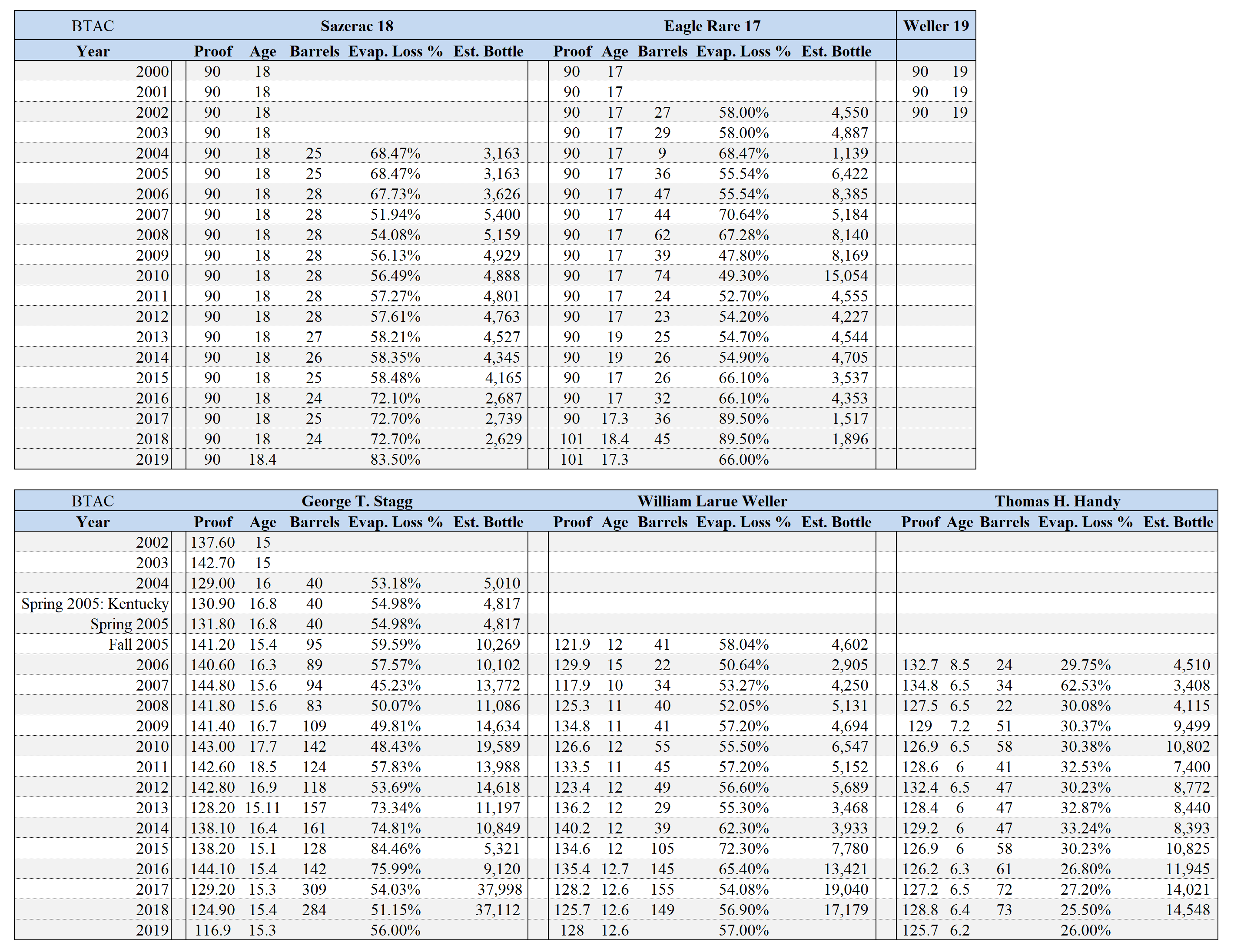 The previous edition of Sazerac Rye 18 Year Old was named “Best Rye Whiskey Aged 11 Years and Over” by “Jim Murray’s Whisky Bible.” This 2019 straight rye whiskey release has notable flavors of vanilla and maple syrup, with a finish of black pepper and spearmint. The barrels for this whiskey were filled in the spring of 2001 and it rested on the second floor of Warehouses K and L.

The Antique Collection was introduced more than a decade ago and has become a cult favorite among whiskey connoisseurs. Since 2000 these whiskeys have garnered numerous awards from such notable publications as Whisky Advocate Magazine, Spirit Journal, and “Jim Murray’s Whisky Bible.”

The 2019 Antique Collection whiskeys will be available in limited quantities starting in late September or early October. Suggested retail price is $99 each. For more information visit http://www.buffalotracedistillery.com/brands/antique-collection.

Can Iowa expect an Antique allotment?

I have 2014 bottles of Stagg and Hardy, looking to trade one of these for an Eagle Rare 17…

Where in Maryland and DC is the 2019 BTAC likely to be released?

Columbus, Ohio getting any of these…if so, when??

In OH it’s done by lottery held by the Ohio Liquor Control. You can check their website as to when you can register. Oh can also go to any liquor store in the state and they’ll have paper entries once the lottery is announced. One per person, so round up the whole fam damily!

Can anyone please help me find blantons
Or buffalo trace 50ml bottles in the U.S.? I have looked everywhere.

Blake, Thank you for all of your great insight! Congrats on Seelbach’s! Are you doing the Pappy & BTAC tracker again this year? Any shipping yet?

Blake are you doing the BTAC release map this year? I hear it may have hit retail in a few places already.