Back in 2012 Nathan Myhrvold released his epic (think Iliad and the Odyssey) culinary book Modernist Cuisine: The Art and Science of Cooking. The book includes a method of “hyperdecanting” wine by blending for 30-60 seconds at the blenders’ highest speed.

Aeration exposes the liquid to air but why aerate or decant in the first place? Wine is aerated because two things happen when it is exposed to air. First aeration triggers oxidation. Oxidation helps mellow out some of the more harsh flavors in wine. Second, aeration causes evaporation. Because some of the ethanol (the rubbing alcohol smell) evaporates you’re able to smell more of the wine. Hypedecating takes the aeration process and uses dynamite instead of a chisel.

You may be thinking you accidentally clicked on a wine article and not a bourbon blog but you’re in the right place. After trying hyperdecanting with wine I couldn’t help but wonder if hyperdecanting could be applied to bourbon. Bourbons composition is certainly different than wine. Unlike wine, bourbon doesn’t continue to age once it goes in to the bottle. However, oxidation and evaporation could still have an effect on a bourbons taste.

To test hyperdecanting I selected three bourbons to experiment with. The first bourbon that came to mind was the Poor Man’s Pappy mixture. The mixture always seems to taste better after sitting for a few weeks, which I assume is due to aerating, so I wanted to see if we could get the same results in 30-60 seconds. As a comparison to the Poor Man’s Pappy I selected Old Rip Van Winkle 10 year. In hindsight I should have used the Van Winkle Lot B (12 year) however I had an opened bottle of ORVW 10. I wanted to find out if hyperdecanting could round out some of those sharp edges.

To keep things legit I decided to do a triangulated blind tasting. I had a friend pour three glencarin glasses of bourbon: 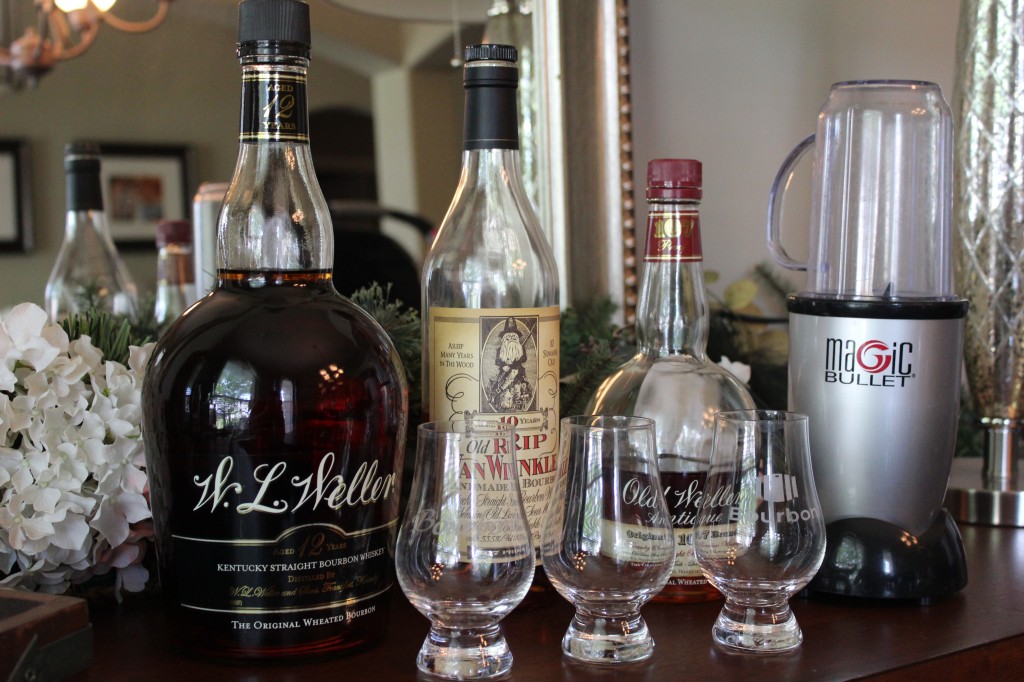 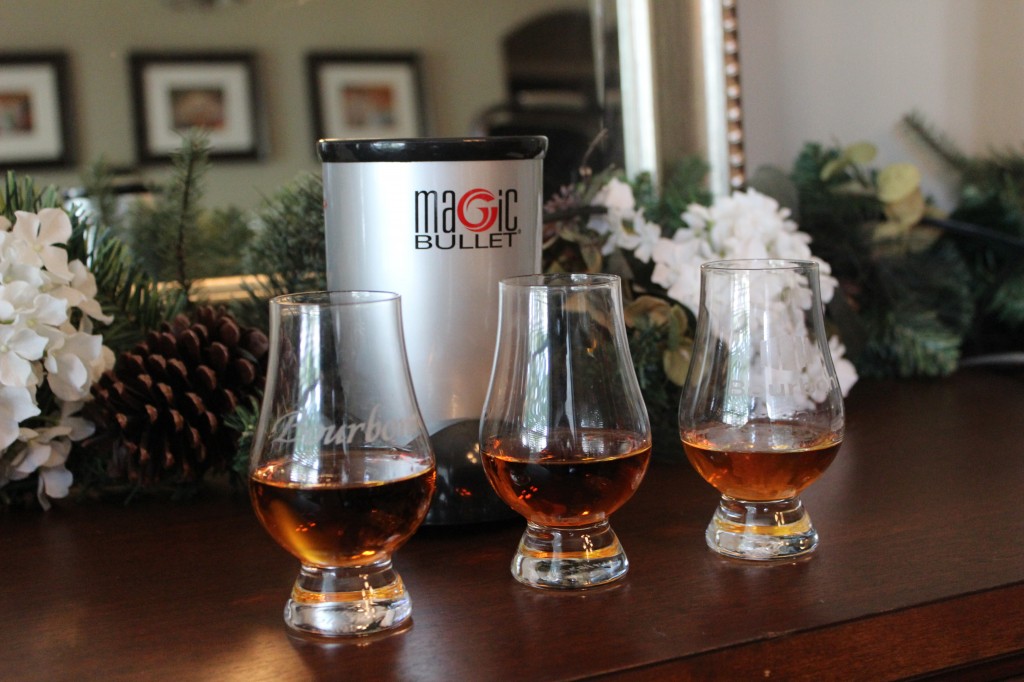 I call this blend “Bullet” bourbon 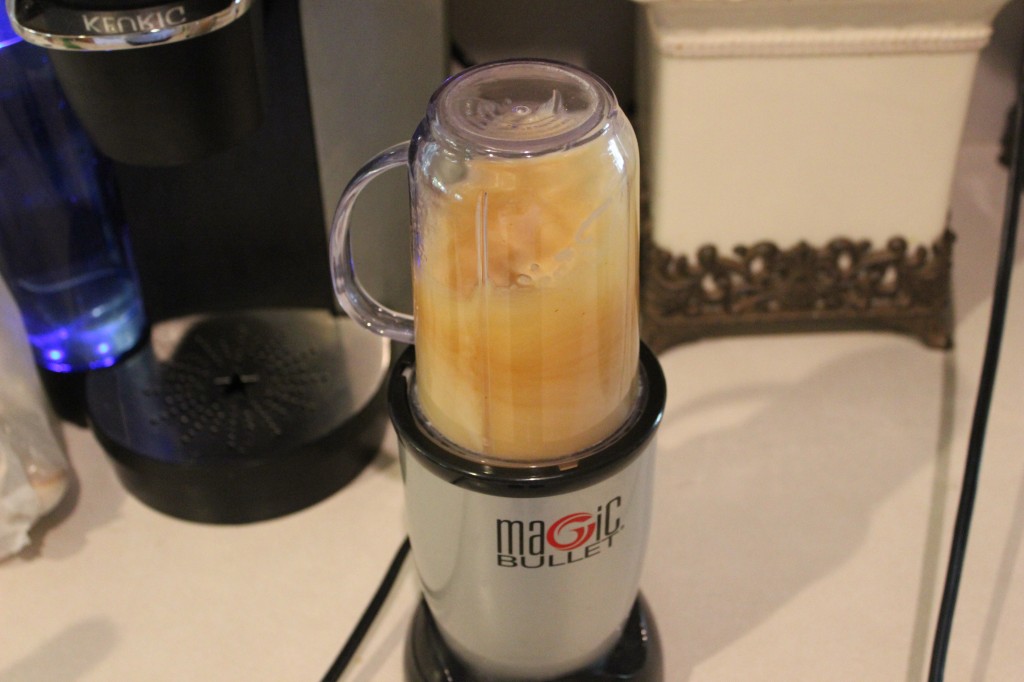 For the tasting I recruited my brother and a friend to guest judge. It wasn’t too tough to talk them in to participating in a “science” experiment that involved tasting bourbon. The bourbons were poured in to the glasses while we were in a separate room and then we all tasted separately.

What’s interesting is two of us selected the blended PMP as our favorite while all of us selected the unblended PMP as the least favorite. Tasting blind is always interesting and I could have sworn I had the ORVW 10 pinned. I was pretty surprised when it was actually the blended PMP. What’s even more surprising is the affect that blending the bourbon had. There’s a noticeable improvement between the blended and undlended. The blended Weller 12 and Weller Antique mixture had a silkier taste with much less burn than the undlended. Hyperdectanting claims to age a wine 5 years in 30 seconds. After this experiment, I’m led to believe it does the same for bourbon.

While I don’t think blending your bourbon is the answer to transforming terrible bourbon in to delicious bourbon it is definitely worth giving it a try. If you do give it a try let me know the results

Cool experiment and interesting results, but was the unblended PMP mixed on the spot or had it been mingling for a few weeks?

Thanks! I used newly mixed PMP. I’d liked to compare a blend that had been sitting for a few weeks with a newly mixed and blended

Thats what I’m thinking. I’ve got some 60/40 OWA107/WLW12 thats been blending for a week now, might try a comparison with a blended (you know what I mean) version after another week

That is fascinating stuff. I usually let me whisky sit open to air 15 minutes before sipping neat and do the same with red wine. How interesting that a value brand of whisky can be made more attractive by such a simple exercise. Thank you for the education.

thnks. will give it a try….just for the fun of it

Wow this is very interesting and I wonder what it would be like to mix other Bourbons together. Hmmm

You should try this with Stagg Jr and Stagg. See if the blending makes Stagg Jr any more comparable.

Took this experiment small-time and simply aerated a scotch I was feeling could use it. Long story short, if you want to “hyper decant” on a micro level, one of those handheld milk frothers kills it. The difference after about 30 seconds was brilliant.

The PMP sounds more like bottle shock than aeration. Bottle shock definitely happens with wine both when it’s bottled and then after it’s shipped or otherwise disturbed – it takes a while for it to return to normal, and is noticeably different. I think this is also a factor with whiskey.

I’ve heard both David Perkins at High West and Drew Kulsveen at Willett describe their whiskey being affected by this. On the tour at High West, someone asked what proportions of the various source whiskies go into the blend and he said that was the secret, and it took them a very long time to determine that because it tastes very different when you first blend it vs. when it’s been in the bottle for some time. Likewise, Drew has said that he wishes he could hold onto batches of Noah’s Mill for a few months after blending and bottling.

Worth running an experiment on this. Also if the bottle you pour your PMP into is pretty full there’s not very much aeration going on.

I believe you’re correct but I’m not sure what the difference (other than name) is. PMP is noticeably better after sitting in the decanter for a could weeks. My guess was that you’re expediting the process by blending.

Definitely a few things wrong with this article from a chemistry perspective.

First of all, the “rubbing alcohol smell” is actually not ethanol itself – which, when pure, is virtually odorless aside from a slight tingling sensation on the nose. And no matter how much you aerate wine/bourbon, there’s still going to be huge amounts of ethanol in it, so the 1-2% of evaporation from aerating it to death will make virtually no difference.

Secondly, alcohol does actually continue to age in the bottle. All spirits age over time. Tannins break down, acids react with alcohol to make esters, etc.

If there is any reason that bourbon tastes better after sitting in the glass, it’s that the volatile components of the spirit are combining with air, making it more aromatic, and that possibly some lighter heady components that exist in spirits in tiny quantities (e.g. acetone) have evaporated.

Spirits age in the bottle only once the seal is broken. If the seal is intact, the spirit won’t age unless outside sources initiate those chemical changes (ie drastic tempature fluctuation, sunlight exposure, water damage to the capsule) or by storing it on it’s side for extended periods (thus over-exposing the cork to liquid, thus creating small openings exposing the spirit to oxygen which would definitely alter it’s compound characteristics!)