Elijah Craig (made by Heaven Hill) has gone through quite a few changes over the past couple of years. First, it started with moving the “12” to the back label. Heaven Hill reassured everyone that the age statement wasn’t going away. It was just moving to the back. In January, the “12” was officially dropped and Elijah Craig became non-age stated (NAS). I’ve tasted both. The 12 year is definitely better. However, the NAS version still beats a lot of other bourbons at a similar price point. 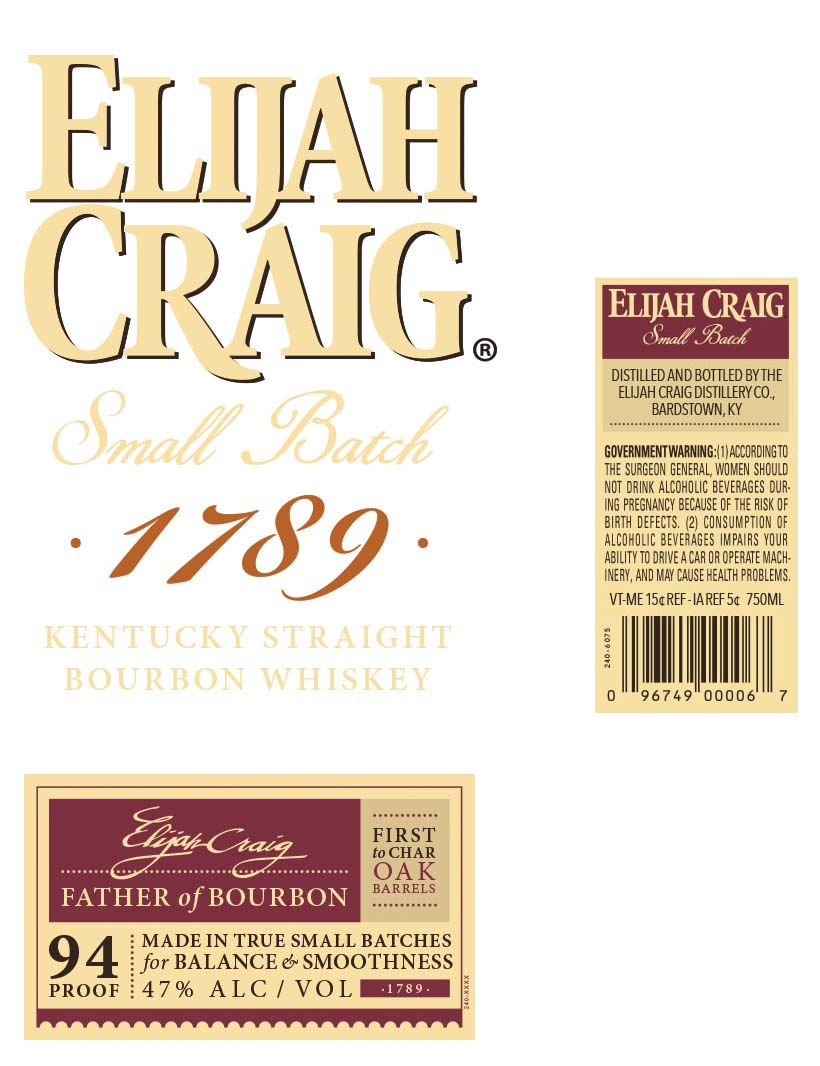 Today, Heaven Hill received approval for Elijah Craig 1783. I assume this is an effort to take the branding away from a “dropped-age-statement-bottle” to its own brand. The design looks nice. I’m sure the bourbon will taste good. There are rumors that the 12-year could return at a higher price point. With the new design, it probably more than just a rumor.

I was never really blown away by Elijah Craig, anyway, but between the slightly shady way they’ve handled dropping the 12yo age statement, the disappearance and subsequent reintroduction of the 18yo at an astronomical price point and comments from Heaven Hill’s Larry Lass about those events on WhiskyCast and in Whisky Advocate magazine, I’m finding myself less and less inclined to spend money on any of their products going forward.

I hear ya! I hate it when the distilleries get to greedy and start doing shady things to cash in…the quality of their products always suffers behind it. They should’ve NEVER taken their EC12yr.old off of store shelves…that was their flagship bottle and a representation of their business/name, which solidified the brand…bad move on their part. IMHO, if anything, they should’ve just went on and upped the price on it. I think most people would’ve paid $40 for the EC12yr.old. Instead, they’ve decided to play games with labels and marketing.

Heaven Hill would not confirm that the 12yr will be back, but the idea was not shot down either.

Yeah, something like what’s going on with Buffalo Trace and their Weller 12…..what’s up with the 12 year old whiskeys disappearing?

I was at Heaven Hill in May and they said on our tasting that the new Elijah Craig Small Batch branding would also include a new bottle shape and size. So it seems they are really trying to separate the Elijah Craig small batch from the Elijah Craig Barrel Proof bottling.

I’m going to miss the Oak-y goodness of the 12 year. Might have to swing by the big box in town and pick up a case of the 12 before they double the price.

Hahaha, good luck in finding a single bottle of the 12yr age statement EC, much less a whole case of it! They’re long gone…since last year, but there’s always bottlespot.

Depends on where you are. Around me, there’s still at least 5 bottles with the 12 on the front.

Lucky you! You should buy the rest of them because they NAS bottles suck!

my local shop has cases of it on the floor. It’s the back of the bottle age statement, but it’s 12 year. Bought it yesterday.

Wow, really! You better stock up, because they NAS is just not good….the closest you’ll get to the taste of the old EC12 yr old is the EC barrel proof brought down with a little water….If you don’t mind me asking, where is the shop you’re talking about? I really would love to get some for myself….

Ttotal Wine in MN still has a bunch of it

Was Elijah Craig the “Father of Bourbon” and the “first to char oak barrels”? Likely not, but if it helps maintain sales in the absence of an age statement, why not continue to include that on the label? 😉

Exactly! Some of the hype and stories that comes with some of these whiskeys are hysterical! Especially funny are the tales that Orphan Barrel puts out about their “lost barrels”..hahaha.

Aahh…Heaven Hill doing the old classic, ” bait and switch” with the EC12Yr.old…..same juice, different label…tsk..tsk…tsk…I’m gonna take an educated guess and say the NEW(ish) and improved EC12YR.OLD will now be $69.99 coming soon to a store shelf near you!

Heaven Hill is quickly burning bridges with me. Slimy behavior with how they are handling their Elijah Craig brand. I won’t be buying any of it on principle alone.

Heaven Hill is trying to have a brand they can grow and grow and grow. Something they can sell as an everyday bourbon and not keep getting hung up in an age statement. I get it. Bringing back a version of the 12yr where they could be even more selective of barrels sounds pretty good to me. If it’s too expensive I won’t buy it, but HH could use a product in the $40-something price range and a 12 yr offering makes sense at that price point.

I love bourbon, but I also understand these guys are running a business. They got caught promising an unlimited supply of 12yr old bourbon and they couldn’t keep the promise. If the stuff tastes good and the price is fair I can get over some clumsy marketing.

A NAS bottle is almost like grabbing a week out of date chicken from the meat counter. May be OK, but the chance it is not so good is there. I stay away from NAS bottles mostly. The age statement commands more money now and probably will in the future. There are still a lot of really good brands left on the shelf.

Yes, they did. But now they have no age statement. HH handled this whole thing like a bunch of hacks. They sure don’t give consumers much reason to trust them, that’s for sure.

Are the bottles with the age statement on the back label really still 12 year?

No. They’ve dropped the age statement all together

Good question. Legally they have to be, but something changed, because there is a difference in taste between the two. I was going to stock up on the back of the label age stated bottles while they were still out there, but after a side by side with one of my big-red-12-on-the-front bottles, I changed my mind. They changed something else besides the age when they changed labels.

Really need an update on this, I’ve recently bought a bottle of 12 year (big red 12 on the front and the line “aged 12 years” on the back) and I’m very confused – after reading all of the above comments – on where we stand today…
Any clarity would be greatly appreciated!