Pairings can often be intimidating. Figuring out what flavors work together is often more trial and error than anything else. Pairing a bourbon with a cigar is about matching flavors. Eric over at Stogies on the Rocks has a great rundown on how to pair bourbons with cigars. I suggest relying on what you know. For me that’s bourbon.

When I buy a new cigar I’ll ask the store about it, try to get an idea of the flavors and then research some reviews online. Based on that I know what direction I should go with the bourbon. If all of this sounds like too much work just grab one of the pairings below. Or, the bourbon and cigar that is closest. 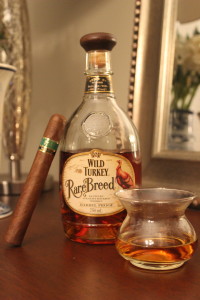 Based on reviews I knew this cigar would have a lot of flavor. Because of that I reached for something that could stand up to this flavor. Wild Turkey Rare Breed turned out to be a very good pairing. The Rocky Patel packed a lot of spice which went well with the caramel(ly) peppery taste of the the Wild Turkey Rare Breed. What I really learned from this is full flavored cigars are probably not my thing but Rare Breed is just so good. 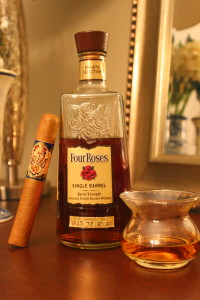 I’m not sure if this was a good pairing or just a good cigar with a good bourbon. The Sucker Punch was sweet, nutty or woody  with a little bit of pepper. A sip of Four Roses rounded out the taste perfectly. This was Four Roses OBSK but regular Four Roses single barrel would work. The bourbon is spicy with its high rye content but also sweet and 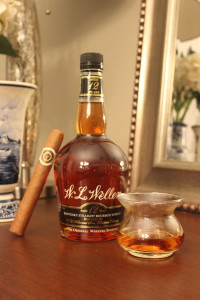 The cigar is mild and with a smooth pull. While the Macanudo isn’t nearly as flavorful as the other 3 it’s really improved by the Weller 12. The WL 12 is woody, sweet with a maraschino cherry finish. This could be a daily smoker and drinker.

What are your favorite bourbon/cigar pairings?

Based on reviews I know

Brother in law and I sat down with some Abraham Bowman and Elmer T. Lee neat the other night and smoked an Opus X which paired very well with both.

Love this kind of tid bits. Saves we consumers lots of money in trial and error trying to find our niche

I concur on your Weller observations! It’s a hidden jem on my bourbon shelf.

Pairing a cigar with a drink is really easy. It’s not something to stress about at all. Basically as follows.

Question 1: Is what you’re drinking an aged spirit?
IF the answer to question 1 is YES, any premium cigar will go with it very well.

Sure you could get really in depth with it, but why bother if the goal is to relax with a good cigar and glass of your favorite spirit?

Better than the Weller 12 is Weller Antique 107 with a splash of water paired with a MUWAT Kentucky Fire Cured . A perfect balance to my palate.

I’m pretty sure that good bourbon pairs well with cigars, period. Almost every time I enjoy a cigar, it’s with bourbon.

Two tidbits:
Bourbon and cigars are great, but don’t forget the dark chocolate. I find that good dark chocolate, cigars, and bourbon (or aged rum) go wonderfully together.
A drinking teqnique that I enjoy while having a cigar is to blow some of the cigar smoke into my snifter before taking a drink. I rarely use a snifter anymore with bourbon as I prefer either the glencairn or neat glass depending on the bourbon, but when tasting a cigar as well I grab the larger snifter for my imbibing.

If ever you’re in the Philadelphia area, you’re invited to join us at Holt’s Cigar Member’s Private Lounge for our weekly Whisky Blasphemy Thursday Night Gathering. All we do is drink scotch, bourbon, rhum, eat, smoke cigars, and have fun. You’re my guest. It’s a standing invitation.

Sounds like a great time! Next time I’m in Philadelphia I’ll definitely take you up on the invite

I will have to try these pairings. I will also have to try what Peter said and throw the chocolate into the mix. It all sounds so good.