This week, me and several other whiskey writers got an opportunity to take part in the first tastings of the new Booker’s Rye. Tasting whiskey at a distillery is always fun, and it was an honor to be a part of it. This one will go down as one of my favorite bourbon/whiskey experiences so far. Here are the details of the release. 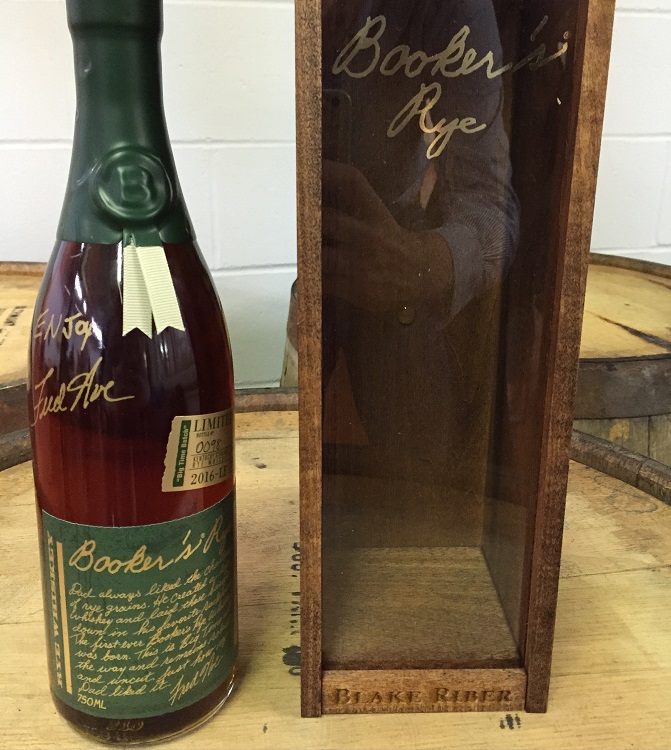 Mash bill: Unknown. Fred did say that this rye was different from their regular rye. My guess is somewhere between 70%-80% rye. Their typical rye is 51%, and the taste isn’t like other 95% ryes I’ve had.

Bottle count: No clear answer on this either. Fred said there were 100 barrels in the release. Based on my experience with similar barrels I’d estimate between 80-140 bottles per barrel. That’s a big range, but not all of the barrels came from the same level of the warehouse. Based on all of this I’d say there’s around be 9,000 bottles in the release. Also, note that the bottle numbers are only four digits.

A Day At Beam

The day began with a tour of Jim Beam distillery. No matter how many distillery tours you’ve been on, it’s still fun to see where bourbon is made. The massive scale that Beam does produces bourbon even more impressive. While walking through the bottling line myself and a few of the other bourbon nerds noticed empty boxes of Booker’s Rye. As our cameras came out the tour guide quickly shuffled us along to prevent us from spoiling the fun to come. 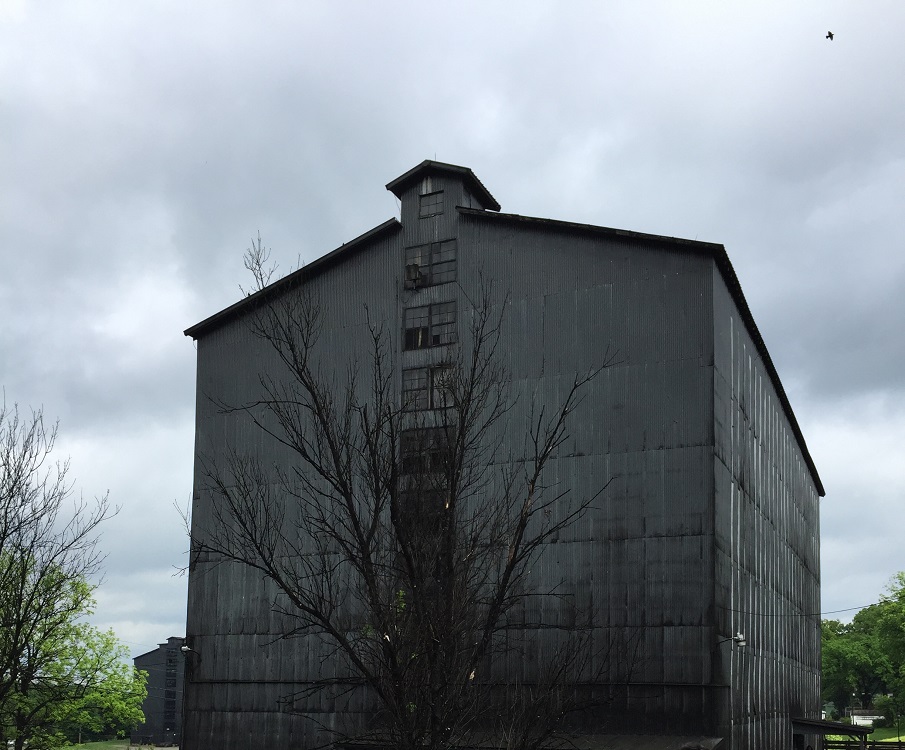 After finishing the tour and some gift shop purchases we headed to the warehouse to taste. First up was the newest Booker’s Roundtable pick (more to come on this in a later). Second, we tasted the new Knob Creek 2001 (you’ll have to wait a week for this post as well). Finally, the Booker’s Rye. I’m pretty sure everyone went back for a second pour on this one.

After tasting the rye, it was back to the bottling facility for the bottle unveiling and to try our hand at the final few steps in packaging. The packaging process includes hand writing the bottle numbers, adding the Booker’s “B,” dipping in green wax and boxing the bottle. If you’re lucky enough to get a bottle labeled 0002-0013, I’m sorry. That’s my terrible handwriting on your bottle. In my defense, I warned them that I failed penmanship in elementary, and I’ve never recovered. After refining our packing skills we got a chance to package our own bottle. It’s crazy how hands on the Booker’s packaging process is.

The initial notes are fruity and toffee. There’s some black pepper spice. Not too spicy and it fades to more cinnamon/nutmeg. It tastes like apple cobbler with the sweet fruity spicy notes. It has an almost caramel chew to it. The finish is well balanced with a tannic wood note. It’s delicious, and I feel like these barrels were pulled at the perfect time. It’s complex and balanced. 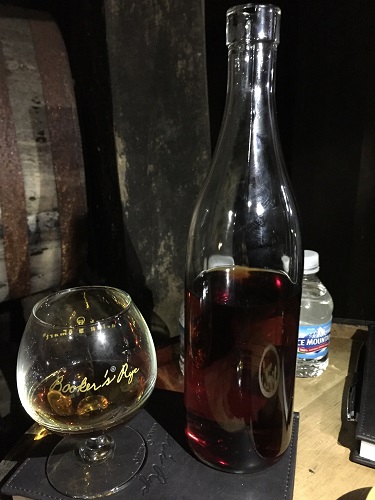 Based on the circumstances I tasted this whiskey, I didn’t want to be over excited about it. After tasting it’s hard not to get excited about this release. This whiskey is special. The availability of aged rye is slim. Add barrel proof to that and the list is even smaller.

The question everyone wants to know. Is it worth the $299 pricetag? That’s an impossible question to answer because it varies for different people. I enjoyed it much more than Thomas Handy which frequently sells for more than $300 on the secondary. Would I rather have five bottles of Booker’s for the same price? Probably, but I don’t think there’s any bottle I’d prefer more than five bottles of Booker’s. I’ll still be ready to buy a bottle if I see one at retail. For me, that’s the deciding factor. If I’m going to spend money, it’s got to be great.

There’s plenty of guys that will pass because of price and I understand. I would still suggest that you hunt down a pour at a bar. There’s also no doubt that this bottle will be at least $600 on the secondary. Because of that, I don’t blame Beam for the increased price tag. It’s the nature of the bourbon world today.

I’m sure Booker’s Rye is great, just not for $299. Because this bottle ‘may’ sell for $600 on the secondary market should not be a reason to justify a $299 price. Flippers will pay anything as long as they are doubling their money.
There are too many reasonably priced and great tasting ryes available at any given time.

I will be boycotting this release based on the absurd price tag. This arms race of retail prices should not be encouraged by the consumers. What is so absurd here is that Jim Beam is a major player in the bourbon business… how much money are they making each year? This has nothing to do with “return on investment” and everything to do with exploiting the market. Thanks but no thanks.

This price is even more obscene when one considers that Booker’s 25th sold for $100 MSRP and in many markets you could grab it off the shelf for at least a couple of months after release at that very price. For Beam to charge triple the price that they asked for the 25th is just flat-out greedy and no way will I be playing this little game. Makes me look at Beam, in general, in a dimmer light as well.

I’m not defending the price by any means. One of the factors that makes this more significant is that it’s the last batch made from Booker Noe, himself.

No thanks!
I like CR Royal Harvest so much I son’t need to spend more than 40 bucks for my Rye fix!

Again this sounds like the real estate market of 2006/7 . This particular example akin to developers then jumping into building too many strip-malls in wealthier suburbs that are now posting in 50-75% of their windows: “office space available” that no one wants or has the money to rent.

Agree that the price is absurd, the market for special releases has gotten completely out of hand! Even if you can find a bottle at your favorite watering hole the price will likely be in excess of $50 a pour! Definitely outrageous wheather by the bottle or the glass!

I find it inappropriate and unprofessional that you are estimating a secondary market price on this yet to be released bottle. This blog is good. It’s updated frequently with educational and informative articles unlike other sites that seem to be quite sporadic. Like it or not and even if you don’t realize it, you are a leader in the bourbon nerd world. That includes the nerds who flip and use the secondary to make money. Your ‘word’ is what people trust and quote and follow and incorporate into what they think to draw their conclusions. Most people reading this site despise the secondary. By throwing a number out you are helping drive that market. By mentioning the secondary, you are helping to fuel the hype and desire of those flippers to score a buck. I came to your site to learn about this rye but not to learn what the a potential secondary price could be. Let the secondary figure it out. It will happen without your input or approval. Please get back to the bourbon.

Please, he’s just being realistic. And guess what he’s spot on, they’ve been selling for $500-$600 on secondary. The market for these types of releases is set by the thousands of people who are buying, selling, and trading on secondary. You are a fool if you think Blake stating the obvious matters one bit. He’s just making people aware that if they decide to pass at retail and want a bottle later it will cost them. I only buy at retail but if you think anyone affects the secondary market besides the many people who will overpay for every rare release you are mistaken.

Derek – Blake makes it pretty clear that the $300 retail is a debatable price point for this bottle. If he wrote “pay whatever you have to in order to get this bottle” as many other “Bourbon Leaders” have done on limited releases, then you could make a case that this was feeding into the frenzy. However merely making an education assumption is not changing anything. The notion that his secondary price reference sets the price point in that market is absurd. Unfortunately in this day and age flippers will list this at astronomical prices no matter what. Also are you really telling Blake what he can and can’t write about in his own Blog?

Blake I am a collector and with over 130 bottles in my collection I am prepared to sit this one out as well. I don’t need bourbon but I do very much want it however I find myself sitting on the sidelines more and more due to the secondary market.

Hi,
I am afraid we have no say in pricing. If distillers go up on their pricing they have the potential to collapse the secondary market. Fewer stores will buy something this expensive. With most stores passing on it supply and demand might be closer to homeostasis. I hope so.
I have tasted it and it really is extraordinary. I will not pass on it, it is that good. When you compare the pricing to other whiskeys around the world $299.99 still seems very fair.

You can’t blame the distillery for increasing the MSRP on their products. That’s just business and they should value their product at the highest point the market will allow. Although I won’t pay it since I’m a cheapskate and prefer to stuff my cash in mattresses, IMHO $299 is very fair considering the market.

LOLLOLLOLLOL!!! I hear ya!

Wow, $299.00!!! The distilleries are doing their own flips now, good for them, why the hell not beat the flippers at their own game… I love BOOKERS and always stock at least a bottle in my cabinet; however, i will skip buying this one because of the hefty price tag. I’ll be heading out to my nearest local watering hole to try a pour instead.

**Update** I won the VA lottery to purchase a bottle of this!!!!! YUP, I bought one….I know, I know what I said about NOT buying one because of the price….but BOOKER was (figuratively) BEGGING and CALLING for me to take him home, so I did what I was called to do. Now, if only I could be as lucky with the MEGA MILLIONS! HA!!

Picked up one of these at the local store today – Huge store in Houston that only had one bottle that was put on shelf. Didn’t think I would buy it at that price, but when confronted with actually seeing it on shelf I couldn’t resist. Given the reviews it’s getting and that it’s Bookers last batch (and only Rye) I will probably hold on to it for a while to see how a trade market shakes out, but I’m just thankful to find it and have the opportunity – price or not.

I’ve been hearing rumors that Beam will be releasing multiple expressions of this in the near future.. anyone know if there’s any truth to that?

There are only 6,000 bottles in existence. This was Bookers last Bourbon laid down that was still aging. There will be no more! Hence the price!

There’s probably closer to 12,000 but the point remains the same

I had read 6,000 as well, which I believe matched the B25 release from a couple years ago

I just bought a bottle at a NH state store and the bottle # is 9534 so whoever is stating 6000 bottles is way off base.

Seven bottles remaining in NH state stores as of tonight – I relieved them of one bottle today :-O