Maker’s Mark (MM) is the last major distillery added to the “Bourbonr Mash Bill Break Down” list. Initially, I didn’t plan on creating one for MM. They only have one mash bill and for the first 60(ish) years of the distillery, there was only one product. I’ve been told that Bill Samuels would say “Do you see a Chateau Lafite Reserve? No! That’s why there’s only Maker’s Mark bourbon.” Whether or not the quote is authentic the gameplan is true. Sure, the bottle may have changed, but the bourbon remained unchanged for over half of a century.

Maker’s has released three new products in the last seven years. I don’t forsee them keeping this pace but I think it’s time for a cheat sheet. Maker’s Mark purist may see these new releases as watering down the Maker’s Mark brand but I would disagree. Maker’s Mark has always produced a consistent unique bourbon. Now they’re expanding on that quality. They’ve made “wheated” bourbon readily available since before it was trendy. At 110 proof, they also have the lowest barrel entry proof among  major distilleries. Maker’s Mark is one of the only major distilleries to rotate their barrels in the warehouse for consistent aging. Want to talk about a hands-on process. Imagine moving 53-gallon barrels of bourbon around a rickhouse. 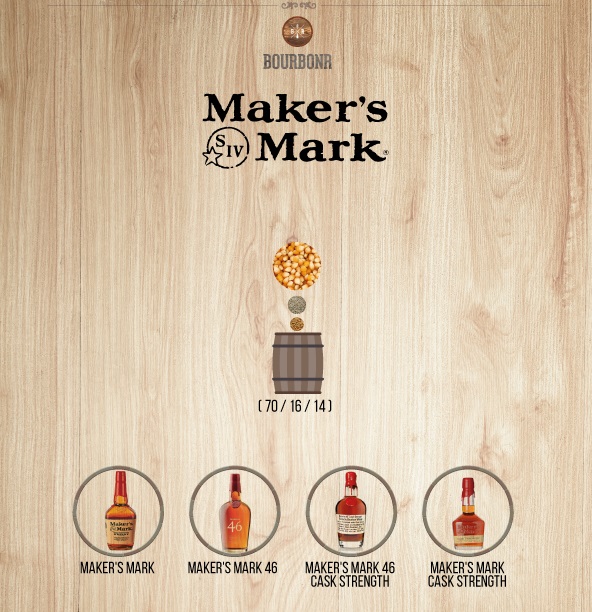 Personally, and against the opinion of millions of MM buyers, Makers Mark is bottom shelf with Jack, Jim, Jefferson’s, Woodford reserve, 1792, Bulleit, Buffalo trace, Angel’s Envy, and anything Wild Turkey.

My pallet says crayons, candles and potpourri diluted I water……….yuck

What do I have on my top shelf? Blanton’s, Booker’s, Noah’s Mill, Stagg Jr., Corner Creek.

One of these days, I’m gonna try Pappy’s and as I’m told, not be overly impressed….too much hype…PS shot of Pappy’s at local bar is $215 vs. retail bottle distillery price of $249 prior to greedy mark-up.

Thus the saying “There is no accounting for taste”. I have found that this is especially true for bourbon.
I enjoy Wild Turkey Rare Breed. But I agree with Your taste on Blanton’s and Bookers. But will happily drink Elijah Craig, Four Roses Single Barrel, Evan Williams Single barrel And The Bourbon that got me drinking bourbon, W.L.Weller Special Reserve.
In my short journey into the world of bourbon, A never buy again is Rebel yell, Bulleit and Buffalo Trace. But that is just me. The broad range of tastes of those that enjoy. By the way, I like my bourbon neat.

I think Rebel Yell. Yes I know, for me tastes the closest to my favorite yet can’t get any more is 12 yr lotB van winkle. Next is four roses, and Weller special reserve.

I wouldn’t agree with your shelves at all. I see you organize shelves according to price, not flavor or quality. But each to his own. Don’t bother on the Pappy’s unless it’s a gift, or at a fair price. We did a blind tasting and guess who won the ‘favorite’ ??? Eagle Rare 17 and
Jefferson 21 both taking top honors.

Ha ha I guess it is your opinion. You put Buffalo Trace on the bottom shelf? Based on what, price? Hilarious. You should probably try Elmer T. Lee. Best bourbon I’ve had. But your shelf selection is highly flawed. But again it’s your opinion.

You are absolutely correct. The Elmer T. price point, blows price equals flavor, out of the water. Elmer is also my favorite bourbon, and as we know, it shares mash bill #2 with Blanton’s. However, ETL lives in the most expensive real estate in the rick house. Did I mention that Elmer (prior to his death) trained only a couple of people of the uncompromising, specific traits necessary when hand selecting the barrels? Yes, Blanton’s is outstanding…One of my favorites. However, to buy Blanton’s, no one has to wait patiently months at a time, calling your store contact to see if their 1-2x/year, 1 per customer, ETL single case allocation has arrived. Fortunately, I have paid between $32-$35/bottle for the past few years.

Thanks, Blake, for making this mash bill. I don’t need to be trendy or drink what’s popular to appreciate a fine bourbon. It was this wonderful redhead that opened my eyes to the fine world of Kentucky straight bourbon whisky and for that I will be ever thankful. And, she remains my favorite to this day because I always know what I’m going to get; a consistent full-bodied pour with just the right notes for my palate. While I enjoy the many other fine wheaters, this one is my favorite go-to.

I feel exactly the same. MM got me into Bourbon, and will always hold a special place in my heart, and on my shelf.

Maker’s is a very good bourbon that has been hyped (and priced) as if belongs up with the heavy hitters.
It doesn’t. More importantly, the “Cask Strength” offerings are just too sweet no matter what one does to craft it to one’s own taste.

If I wanted bourbon that tasted like “oak, caramel, and vanilla,” I’d buy a bottle of Caymus.

I am going to disagree with you Maker’s Mark haters. I was first introduced to Maker’s Mark back in the ’90’s. It struck a chord with my taste buds, and it has been my go-to bourbon ever since. For me, the Cask Strength Maker’s Mark is one of the most drinkable cask strength bourbons out there.

I have tried over 40 different bourbons in the past two years. Yeah, there are some good bourbons out there, including Blantons, Eagle Rare, Wild Turkey Rare Breed, and others. For my palate, the wheated bourbons win out. Weller Antique 107 is one of the finest high proof bourbons I have sampled. Maker’s is very close, and much more readily available.

I buy my Maker’s Mark by the 6-pack at Sam’s Club (6 -175 ml bottles) at around $43 each. I consider that a great value for what I am getting. I have sampled Pappy’s, also a wheated bourbon. I would never pay the high price when I can drink Maker’s instead.

So, to each his own. But this old gray-haired bourbon drinker has Maker’s Mark on the top of his list, with Maker’s 46 on my “special treat” list.

One night a bourbon buddy and I opened a few prize bottles from my special cabinet. Russell’s Reserve, Pappy 10 year and Elmer T Lee. We agreed that Elmer won. My best everyday is Wellers. We use MM for mint juleps on Deeby Day as I married into a Kentucky family.

When you find yourself in a random rural watering hole out west, usually your only choice of ‘top shelf’ bourbon is Maker’s Mark. That is about the only time I will waste my money on what I consider a bottom shelf bourbon… I’m just not a fan. For the same price I can drink Bowman Brothers small batch.

To each their own! Maker’s is great every-day bourbon. Having made bourbon for years I prefer the runs with 50% red wheat, 45% white corn and the remainder toasted 6 row distillers barley and flake rye…..George T Stagg is favorite high end and the Pappy 20 (especially pre boom prices) is wonderful…..Weller and Elmer Lee are among my favorite “other” bourbons. The French Oak makes Maker’s 46 very enjoyable and at a fair price……

To be bourbon, the mash must contain at least 51% corn. So, while your 50% red wheat whiskey might be great, it ain’t bourbon.

Thanks for the post, Blake.
As with so many expressed Boubon-er opinions, an immutable truth stands out: different pokes for different folks. I say: Hurrah for individual taste buds! Is there one “best” bourbon? Thankfully, no, or nearly every distiller would be making “It”.
Me? I’m a “wheater”. Just can’t buy Weller in the Detroit area – the few bathes distributed are snatched up within days of delivery. What’s my fall-back? Maker’s 46 – clearly the 2nd best Bourbon on
the planet (not really – just wanted to join in on the touting).
Who’s next?

Maker’s Mark is one of the only major distilleries TO CLAIM they rotate their barrels in the warehouse for consistent aging.

Any details to back up your claim?

I toured MM on 4/30 and our tour guide “Lee” did indicate they rotate. Top to Middle to Bottom with tastings in between. Their stuff is obviously NAS but Lee said it takes about 6-7 years.

I will not hate on Makers…. LOVE the Makers Mark Cask Strength expression! The original MM was my “first” upscale bottle of bourbon (JD’s was my first intro to whiskey) and I’ve been buying it ever since….absolutely delicious and affordable, but I do favor the cask strength over the original, and that is the one I buy for everyday pours when I’m in the mood for wheat. I also LOVE MMCS in cocktails or on the rocks. It will *always* share space on my bar with the PVW, WLW ans GTS. Great stuff!

An interesting point about the MM mashbill, that it is identical to that used at Stitzel-Weller. Pappy Van Winkle was a huge source of help and advice to the Samuels when MM first opened, including giving him the SW mashbill and yeast.