The Boss Hog: Spirit of Mortimer

There’s no doubt WhistlePig has had some bumps in the road however I’ve always liked their whiskey. It appears that they’ve finally coming clean about their Canadian whiskey roots which is a good thing. I hope they’ve figured out that today’s bourbon/whiskey drinker would take transparency and good whiskey over a magical fairy tale and good whiskey. Pretty expensive at $189 but that’s the new normal. Read the press release below. The bold highlights have been added by me and are the important parts if you’re looking to skim.

Also, check out my review of WhistlePig Boss Hog

SHOREHAM, Vt., Nov. 4, 2014 – WhistlePig Straight Rye Whiskey proudly announces the arrival of The Boss Hog: Spirit of Mortimer, the brand’s much-anticipated follow-up to last year’s Double Gold Medal winner at the San Francisco World Spirits Competition. This top-shelf 100 percent rye whiskey is bottled at full barrel strength; and at approximately 117 to 124 proof, Spirit of Mortimer continues The Boss Hog legacy as WhistlePig’s rarest premium expression.Dedicated to WhistlePig’s dearly departed mascot, a Kune Kune heritage-breed pig named Mortimer, each bottle of The Boss Hog: Spirit of Mortimer is sealed with a custom, hand-crafted Danforth Pewter top, depicting its winged namesake in flight.
“The [original] Boss Hog was a huge success for us last year,” said WhistlePig Founder and CEO Raj Bhakta. “We didn’t want to simply reissue that edition for 2014, so we seized the opportunity to pay tribute to our beloved Mortimer in the most fitting way possible – by debuting our richest offering yet.” 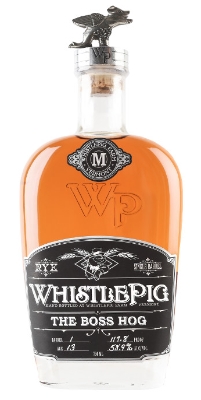 Only WhistlePig’s finest barrels were eligible for The Boss Hog: Spirit of Mortimer. Aged nearly 14 years, 50 barrels were hand-selected by Master Distiller Dave Pickerell to comprise the exclusive release.“The taste signature stays in-line with the high standard set by past [WhistlePig] releases,” says Pickerell. “It maintains WhistlePig’s familiar deep amber color and rich notes of caramel, vanilla and oak, with undertones of mint and winter fruit, making for a warm, bold taste.”

The Boss Hog: Spirit of Mortimer is available now at distributors and retail locations nationwide and carries a suggested retail price of $189 for 750ml.

About WhistlePig Straight Rye WhiskeyWhistlePig is dedicated to curating the finest barrels of rye whiskey available and to realizing a relentless aspiration in becoming the world’s premier single-estate luxury whiskey brand. Master Distiller Dave Pickerell spent over a year scouring the world for the most superb old-stock rye whiskey and hand-selected the best barrels – found in the foothills of the Canadian Rockies – to comprise WhistlePig’s top-shelf profile. The liquid has garnered extraordinary praise from whiskey critics, including a Wall Street Journalselection in the Top Five Whiskies of 2010, and earning Wine Enthusiast’s highest-ever rating for a rye whiskey. WhistlePig Farm is a working agricultural headquarters situated on 1300 rolling acres near Lake Champlain and the future site for the brand’s grain-to-bottle single-estate distillery in Shoreham, Vermont.

$189 for a (nearly) 14-year-old (WHICH MEANS THIRTEEN YEARS) whisk(e)y is pretty far beyond the “new normal.” I suppose what I find to be quite hilarious about the exceedingly expensive American whiskies is that they used to be considered the final frontier of value, but they have fast outpaced their Scottish brethren in the ludicrous pricing game. Outside of the everyone-will-laugh-at-you-if-you-buy-this-NAS whiskies, I can’t think of a single similarly-aged single malt that sells for that amount.

Not sure this is worth that money but the first release (which was/is less expensive) is really excellent. I like it a lot more than Handy and considering availability issues and inflated prices with BTAC, more people should be looking at the Whistle Pig.

I picked this up.. mainly because I liked the Boss Hog last year and I liked the collectible nature of the pewter top. (I know sucker for a bottle). I did not like paying the price for it though and probably wont again. Honestly my biggest problem with the price is timing… with Birthday Bourbon, Four Roses LE, Pappy, and BTAC all releasing around the same time… it doesn’t make a lot of good sense to release Boss Hog then. They would do much better to release during the “off season” so to speak.

Would be interested to hear more from those who have actually tasted it, particularly relative to last year’s release.

I need to know if WhistlePig uses GMO grain in the making of their rye whiskey. If so, that would eliminate their product from my desirable list

I’m sure they do. WhistlePig doesn’t do any distilling but I’ve only heard of a few micro-distilleries that use non-GMO so I think it’s safe to say they do. I’ve heard a lot of people write-off WhistlePig for various reasons but for GMO grain would be a new one to me

It’s because of Raj’s rants about everything Canadian, that I will never buy this Whiskey. Not even if bottled in Vermont, which may as well be Canada anyway.