It’s time for fall releases information to roll out. A perennial favorite is the Small Batch Limited Edition from Four Roses. They combine recipes from their ten different mash bills for the release. Here are the recipes Four Roses used for the 2016 Small Batch: 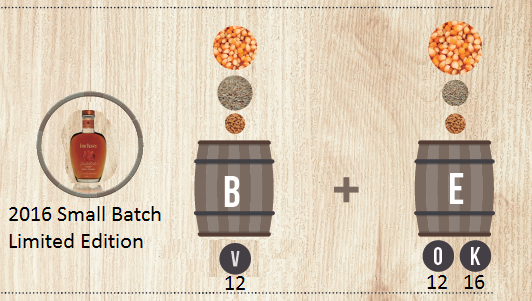 This year’s release is made up of three mash bills: OBSV – 12-year, OESO – 12-year and OESK – 16-year. The bottle denotes 110 proof, but that is most likely just a placeholder. Expect to see this release around the second week of September. Four Roses SmBLE has been consistently great. I don’t expect anything less from this release.

Sounds nice. Let me know if you see any on a shelf anywhere 🙂

The only time I’ve seen SBLE is in bars.

Looking forward to this!

I’ve never seen any either. Or any special release from Four Roses. Too much corruption and just outright lying in the retail stores to find anything like that.

Ditto. Never seen one of these elusive bottles in Northeast Arkansaa.

I delighted to tell you we see these expressions in the Chicago suburbs each year. I can’t wait!

I just bought one in MO at total wine.

Just picked this up by a stroke of luck in WA. Fantastic find.